Google Contacts will include additional information about people in your organization: 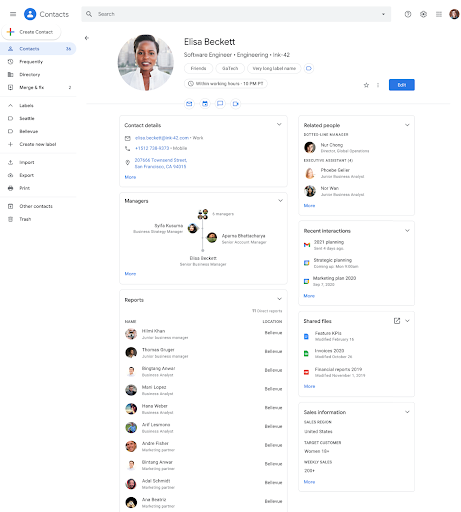 Admins:
End users: To open the Contacts Sidebar, click “Open detailed view” while hovering over a user’s information card, or select the Contacts icon in the side panel. Visit the Help Center to learn more about using Google products side by side.

We’re introducing a new experience for Google Contacts which will help Google Workspace users learn more about their colleagues. Within Contacts (contacts.google.com) or the Contacts sidebar, you can view more detailed information about others, including: 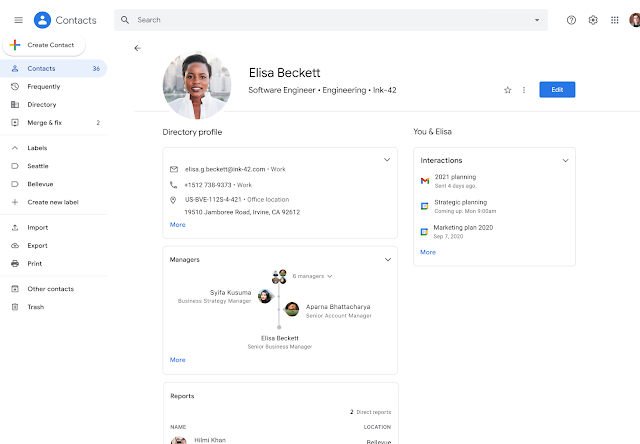 More than ever, our work requires a higher level of collaboration, connection and interaction. To collaborate effectively with those in our wider network, it’s helpful to learn more about them, what they work on, who they work with, and what’s important to them. The redesigned Google Contacts experience gives you the ability to easily learn more about your colleagues and stakeholders, making it easier to collaborate and turn ideas into impact.

To maximize this feature’s value, it’s helpful to have user data fully populated across Google Workspace apps. Workspace admins can populate this data in a few locations:

You can now find additional information about people within your organization, your Contacts, people who email you in the Gmail side panel. This includes: 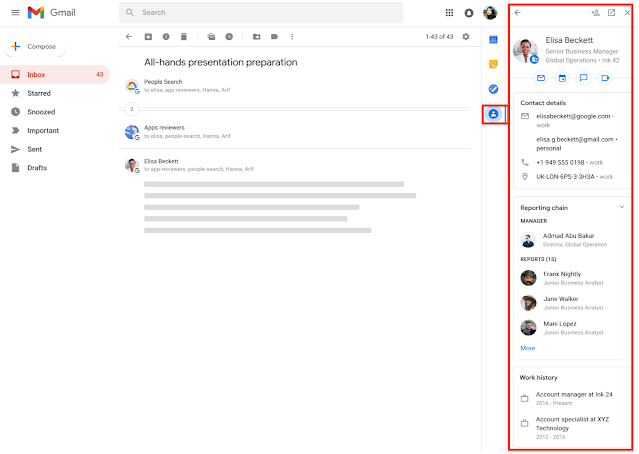 Additional information will appear in the Gmail side panel.
You can also add people to your contacts and send them an email or message.

This feature expands upon information you can already view when hovering over a person’s name in Gmail. In the side panel, you can learn more about who the person you’re collaborating with is, what team they’re on, and whether you’ve interacted with them before. We hope this feature makes collaboration and connecting with key stakeholders easier.

To maximize this feature, it’s helpful to have user data fully populated across Google Workspace apps. Workspace admins can populate this data in a few locations:

We’re adding Trash to Google Contacts. Now, when you delete a contact, it will go into Trash, where it will stay for 30 days before being permanently deleted. In that time, you can view, restore, or permanently delete the contact. Trash will contain contacts deleted on any device—web, Android, iOS, and more—but you can only view and manage Trash on the web. Trash makes it much easier for users to recover contacts they've accidentally deleted.

Contacts hovercards provide lots of useful information about the people within your organization. We’ve heard from you that you’d like better visibility into Google Groups across G Suite, so we’re adding more information to these hovercards when the contact itself is a group.

When you mouse over the name of a group in Gmail, you’ll now be able to see essential information, like group members, as well as take some actions, such as:

You can also select “More info,” which will take you to the Groups membership details page on groups.google.com. The group members will only appear on the hovercard if the user has permission to view them. This functionality will be added to other G Suite apps in the future.

We launched new Contacts in 2015 to provide a modern, smart, and quick contact management experience. We’ve added many features since then and, with the recent launch of contacts delegation, new Contacts now has many comparable features from old Contacts, and more.

As a result, new Contacts will replace the older version, and it will be the only Google Contacts version after February 12, 2019. The replacement process will take place in three stages:

You can find and change the setting in the Admin console at Apps > G Suite > Directory > Sharing settings > Contacts Preview.

The setting to control new Contacts preview in the Admin console
Stage 2: All users upgraded to new Contacts, with the option to opt out

On January 15, 2019, new Contacts will automatically become the default version in your domain and we will remove the Admin console setting. When this happens, all users still using old Contacts will be moved to new Contacts. You won’t be able to change this for your organization, but individual users will still be able to revert back to old Contacts if they want until stage 3 (see below).

On February 12, 2019, old Contacts will be turned off completely, and any remaining users will be moved to new Contacts. There will be no option to use the old version.

We’re adding the ability to delegate contact management to someone else in new Google Contacts (aka Contacts preview). When you delegate contact management, you give someone else the ability to edit or delete information in your personal contacts folder on your behalf. Any changes they make to those contacts will update in your Contacts. Customers will often use delegated contacts so administrative assistants can manage contacts for executives.

You can invite someone else within your organization to manage your contacts through the new Contacts website at contacts.google.com. Once you’ve delegated access, the person you delegated to will be notified by email and will be able to add, edit, and delete contacts on your behalf.

When someone delegates their contacts to you, you’ll get an email asking if you want to accept the request. If you accept, the contacts will appear in a new “Delegated contacts” section of the Contacts menu. You can add, edit, and delete someone else’s contacts the same way you can with your other contacts. If you want to stop managing these contacts, click Remove delegated contacts at the top of the page.

Use the new Google Contacts

If you haven’t already, you can launch new Contacts for your users. New Contacts (aka Contacts preview) was launched in 2015 and has many comparable features from old Contacts, with an updated interface and additional features that increase efficiency. If you’ve previously enabled new Contacts and a user has opted out, they can opt back in by looking for the link to “Try Contacts preview” in the left hand menu at contacts.google.com.

To create a more consistent, streamlined Google Contacts experience, we’re removing the embedded contacts feature in Gmail, which gives users access to their contacts from the top left corner of the UI. This feature doesn’t appear in the new version of Gmail that recently launched, and it will soon be removed from the old UI as well. 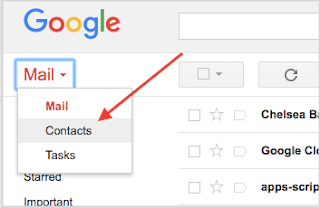 We’re removing the embedded contacts feature in Gmail.
Going forward, G Suite users can access Contacts via their web browser at contacts.google.com or the app launcher. This will direct them to the new Contacts (a.k.a. Contacts preview) or the classic Contacts Manager, depending on which is enabled for their domain. 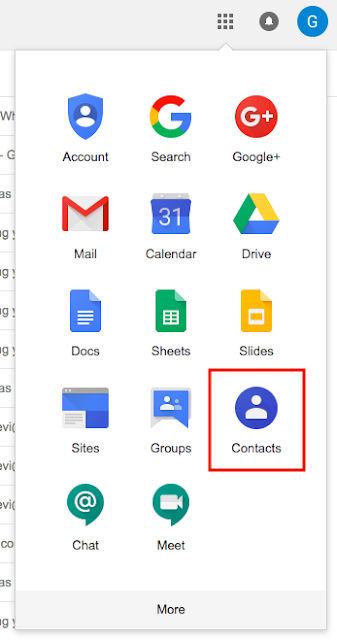 You can access Contacts at contacts.google.com or via the app launcher (pictured).
Unfortunately, many customers are unaware that they previously disabled access to the classic Contacts Manager, because their users can still access the contacts feature embedded in the old Gmail UI (as it isn’t controlled by the Contacts on / off switch). In response to feedback from these customers, and so that their users can continue to access their contacts, we’ve now enabled access to the classic Contacts Manager for all G Suite domains.

Since launching Contacts preview in 2016, we’ve made steady improvements to the product. We’re continuing to work toward feature parity with the classic Contacts Manager, with delegation functionality planned for later this year. We highly recommend that all G Suite customers migrate their users to the Contacts preview, provided it meets their needs.

If Contacts preview doesn’t yet meet your needs and you’re required to disable access to the classic Contacts Manager, please fill out this form and we’ll do our best to accommodate this need. Please note that this means your users will lose access to Contacts via their browser.

Whether your users are scheduling a meeting or catching up on Google+ posts, it’s important that they can easily see who they’re interacting with. That’s why we’ve added new person information cards that appear inside your G Suite apps on the web, like Google+ and Calendar, when relevant.

These cards surface profile information when a user hovers over another user’s name or profile picture with their cursor. The information can include data points such as: 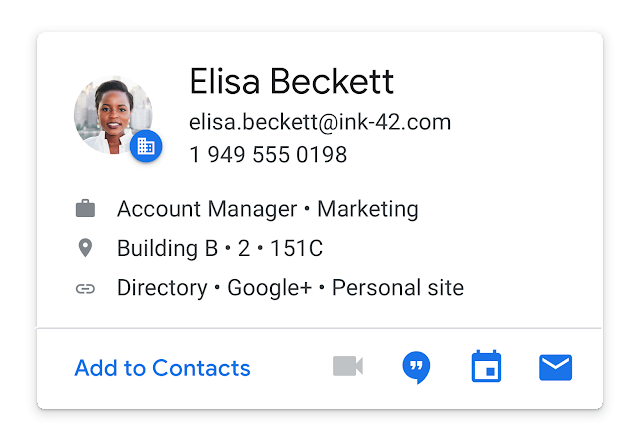 To get the full value of these cards, you, as a G Suite admin, can populate this data for users in your organization in a few locations:

You can also delegate editing rights for some profile fields to end users in the Admin console at Apps > G Suite > Directory. Users can then edit their profile at aboutme.google.com. Additionally, in the future we’ll be providing support for you to delegate editing of other fields, such as Manager and Job Title.

Other Benefits to Populating Profile Data

We recommend populating user profiles to unlock additional benefits for your users. For example, in the near future, Calendar will start using work location to intelligently suggest meeting rooms for guests.

You can see these cards now in Google Calendar and Google+ on the web. They’ll start to appear in other G Suite products over the course of the coming months.