A partial list of changes is available in the log. Interested in switching release channels? Find out how. If you find a new issue, please let us know by filing a bug. The community help forum is also a great place to reach out for help or learn about common issues.
Srinivas Sista
Google Chrome

In May, we launched new Families policies to provide additional protections for children and families on Google Play. As part of this policy change, we’re requiring all developers to provide information on their app’s target audience and content via the Google Play Console by September 1st. Thanks to everyone who has completed it already. If you haven’t done so, please fill it out as soon as possible and consult our developer guide and training course for additional information. 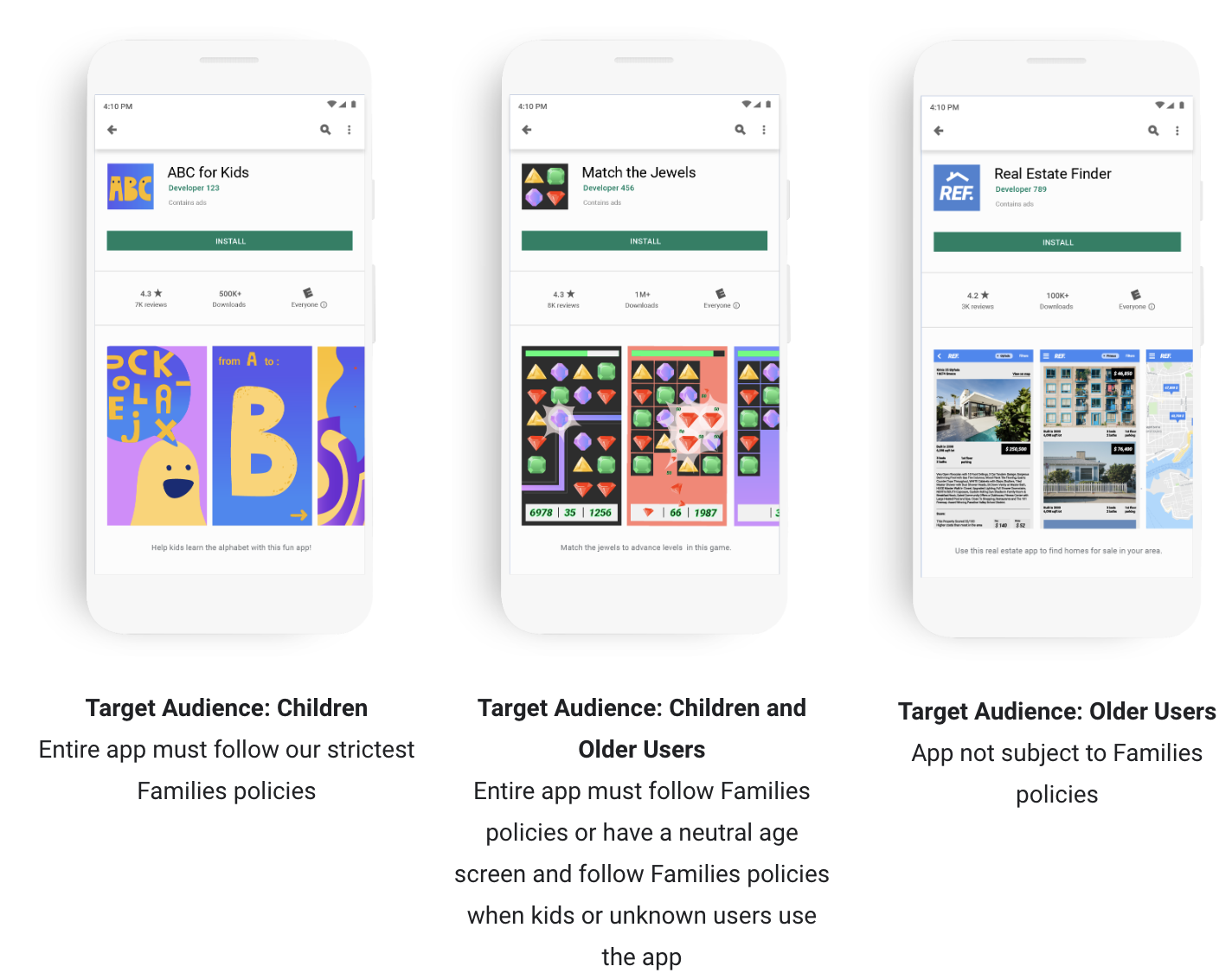 Apps that include children in their target audience need to adhere to our new policy requirements including appropriate content, showing suitable ads (learn more), and disclosing personally identifiable information correctly. We’ve found that checking for these requirements takes longer than the normal review process, and can result in review times of up to 7 days (or longer in certain exceptional circumstances). Apps who submit inaccurate responses in the target audience and content section will also be subject to these reviews. You can find more details on Google Play’s app submission process in this Help Center article.

We respect that you are running a business and longer review times can impact how you work. Our goal is to prepare you for this change and minimize disruptions for you. These apps will be subject to extended reviews for every update, and you may need to update your processes to accommodate for additional review time. Suggestions for how to best adapt to this change include submitting your app at least a week before any important launch dates and (unless urgent) avoid resubmitting your app while it is under review.

These changes help make the Play Store safer through deeper and longer reviews, which is a tradeoff we think everyone is willing to make. Thanks for your continued support in building a positive and safe experience for all users on Google Play.

The Beta channel has been updated to 77.0.3865.56 (Platform version: 12371.41.0) for most Chrome OS devices. This build contains a number of bug fixes, security updates and feature enhancements. Changes can be viewed here.If you find new issues, please let us know by visiting our forum or filing a bug. Interested in switching channels? Find out how. You can submit feedback using ‘Report an issue...’ in the Chrome menu (3 vertical dots in the upper right corner of the browser).Daniel GagnonGoogle Chrome OS

When Jeff Sundheim first moved to New York in 1996, he went running in his neighborhood every morning. He always ran by the same dumpster, which was packed full of oddly shaped pieces of wood. The nearby store, which built new and refurbished antique billiard tables, considered the wood pieces to be trash, but Jeff didn’t. He returned to his apartment after each run with armfuls full of material. That’s how Jeff started making art.

Jeff is in his 13th year at Google, working with advertisers and publishers on creative campaigns and helping companies find ways to appeal to wider audiences. And he says his love of sculpture perfectly complements his work at Google. “There isn’t a dichotomy between my life and work life and creative life,” he says. “It’s all pretty fluid.” For example, he works with advertisers all the time, and the ad industry’s bold fonts and company logos frequently inspire his art. His artwork is varied, including colorful compositions made of discarded cardboard boxes and phone book listings. Recently, he’s been playing with steel, working outdoors and on a larger scale.

His latest work is in New York’s Riverside Park, right next to the Hudson River. Jeff noticed the park lacked seating, so he created a sculpture that invites passersby to take a rest. The piece, named “Wavehenge,” features a wave of steel towers acting as a sundial over four benches of wood. And it contains a secret: Four times a year, at a specific time, the shadows of the steel wave perfectly align with each of the benches. He says he’s loved seeing how people interact with his piece of art. Kids even bring chalk up to it, creating their own art on his sculpture.

Jeff says a new perspective can bring welcome change to everything from a piece of wood to a sculpture or a park. He’s also recently pursued a change himself, undertaking a rotation at Google, spending several months in a new role in Mountain View. There, he worked as an evangelist on a wide range of topics with visiting executives from Google’s largest clients. “It’s an extraordinary way to learn about the company, get a bird’s-eye view and meet incredibly interesting people,” Jeff says. While working out at the gym on campus, he ran into an accessibility researcher and invited him to present on multiple occasions to Google visitors.

Making something beautiful after it’s no longer useful endows an object with new purpose, Jeff says. In his work and his art, he’s drawn to projects that require him to imagine a new future for information or objects that are often taken for granted. “So much of what we do at Google is making things useful,” Jeff says. “I love taking materials I’ve found that have been cast off and giving them a new life, transforming them.”

Last night at the Auckland Museum the third annual IAB New Zealand Digital Advertising Awards were held to recognise the best talent in the interactive media industry. It was a record year for the Awards, with the number of entries doubling from the previous year and the number of awards categories growing from 17 to 23!

Here at Google we’re hugely proud to be part of this event that recognises outstanding work by the people and teams who are leading digital advertising in New Zealand. With both myself [Caro, Google NZ Country Manager] and Susan Carlton [Google NZ Marketing Manager] on the panel of judges, we had the opportunity to review an abundance of incredible work.

Google was delighted to sponsor three key awards this year and our congratulations go to Harmoney for winning Best Use Of Search/SEO for “Creating a competitive advantage leveraging AI & Google Ads Smart Bidding Strategies”, MBM for winning the Agency Of The Year Award, and finally, to Tianze Yu from Big Mobile, the winner of the Grand Prix award. Well done Tianze!

Congrats to the IAB for a fantastic event, which once again proved to be such a great opportunity to come together and recognise the incredible work of these industry professionals.

The beta channel has been updated to 77.0.3865.56 for Windows, Mac, and Linux.
A full list of changes in this build is available in the log. Interested in switching release channels?  Find out how here. If you find a new issue, please let us know by filing a bug. The community help forum is also a great place to reach out for help or learn about common issues.
Lakshmana Pamarthy
Google Chrome

You can see a partial list of the changes in the Git log. For details on new features, check out the Chromium blog, and for details on web platform updates, check here.

If you find a new issue, please let us know by filing a bug.

Now, when you have an Out of office (OOO) entry on your calendar, a notice of that OOO status will appear in Gmail and Hangouts Chat when people try to contact you.

In Gmail, we’ll show a banner about the recipient being out of office and when they’ll be back in the email compose window. 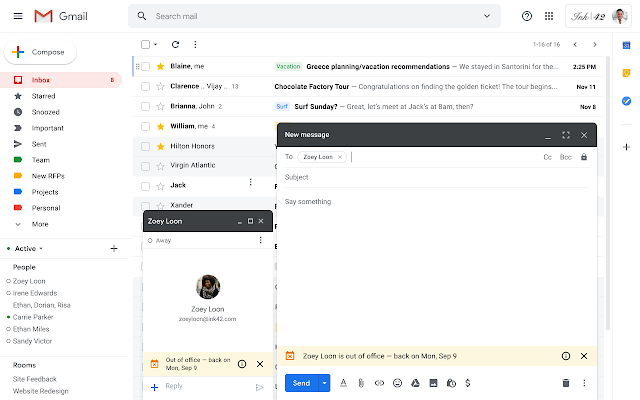 In Hangouts Chat, you’ll also see a small notification in the chat compose window alerting you that the person you’re trying to message is out of office. 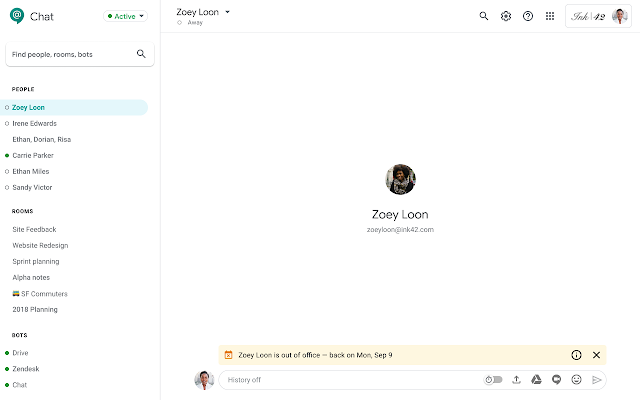 With this launch, before people even hit “send,” your time out of office is visible in more places across G Suite, meaning you get more uninterrupted time away. As a sender, you’ll also have more confidence that you’re messaging people at an appropriate time.

If you’d like to disable sharing of availability information to other G Suite apps, you can do so in Calendar under Calendar settings > Access permissions. Just deselect “Show calendar info in other Google apps, limited by access permissions.”

Rollout details
Notification in Gmail and setting in Calendar 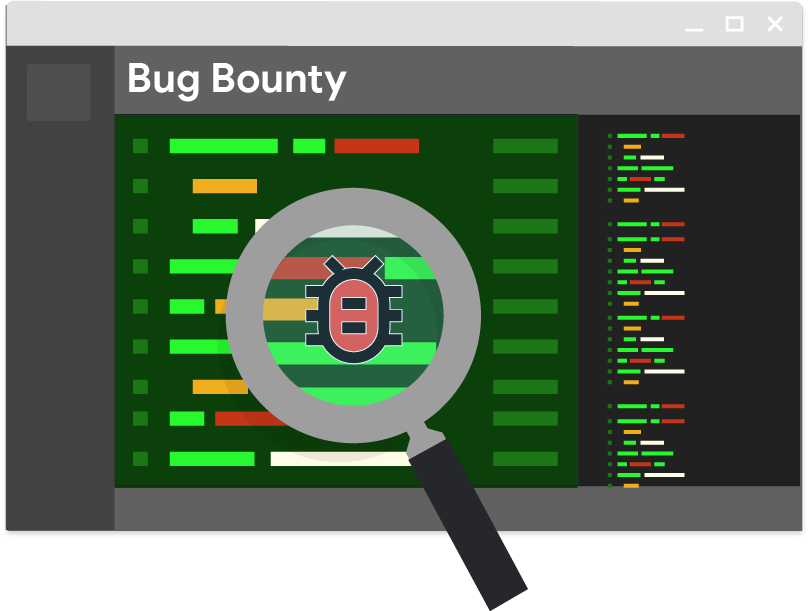 We’re constantly looking for ways to further improve the security and privacy of our products, and the ecosystems they support. At Google, we understand the strength of open platforms and ecosystems, and that the best ideas don’t always come from within. It is for this reason that we offer a broad range of vulnerability reward programs, encouraging the community to help us improve security for everyone. Today, we’re expanding on those efforts with some big changes to Google Play Security Reward Program (GPSRP), as well as the launch of the new Developer Data Protection Reward Program (DDPRP).

We are increasing the scope of GPSRP to include all apps in Google Play with 100 million or more installs. These apps are now eligible for rewards, even if the app developers don’t have their own vulnerability disclosure or bug bounty program. In these scenarios, Google helps responsibly disclose identified vulnerabilities to the affected app developer. This opens the door for security researchers to help hundreds of organizations identify and fix vulnerabilities in their apps. If the developers already have their own programs, researchers can collect rewards directly from them on top of the rewards from Google. We encourage app developers to start their own vulnerability disclosure or bug bounty program to work directly with the security researcher community.

Vulnerability data from GPSRP helps Google create automated checks that scan all apps available in Google Play for similar vulnerabilities. Affected app developers are notified through the Play Console as part of the App Security Improvement (ASI) program, which provides information on the vulnerability and how to fix it. Over its lifetime, ASI has helped more than 300,000 developers fix more than 1,000,000 apps on Google Play. In 2018 alone, the program helped over 30,000 developers fix over 75,000 apps. The downstream effect means that those 75,000 vulnerable apps are not distributed to users until the issue is fixed.

To date, GPSRP has paid out over $265,000 in bounties. Recent scope and reward increases have resulted in $75,500 in rewards across July & August alone. With these changes, we anticipate even further engagement from the security research community to bolster the success of the program.

The program aims to reward anyone who can provide verifiably and unambiguous evidence of data abuse, in a similar model as Google’s other vulnerability reward programs. In particular, the program aims to identify situations where user data is being used or sold unexpectedly, or repurposed in an illegitimate way without user consent. If data abuse is identified related to an app or Chrome extension, that app or extension will accordingly be removed from Google Play or Google Chrome Web Store. In the case of an app developer abusing access to Gmail restricted scopes, their API access will be removed. While no reward table or maximum reward is listed at this time, depending on impact, a single report could net as large as a $50,000 bounty.

As 2019 continues, we look forward to seeing what researchers find next. Thank you to the entire community for contributing to keeping our platforms and ecosystems safe. Happy bug hunting!