A full list of changes in this build is available in the log. Interested in switching release channels?  Find out how here. If you find a new issue, please let us know by filing a bug. The community help forum is also a great place to reach out for help or learn about common issues.

The Dev channel has been updated to 66.0.3356.0 (Platform version: 10443.0.0) for most Chrome OS devices. This build contains a number of bug fixes, security updates and feature enhancements. A list of changes can be found here.
If you find new issues, please let us know by visiting our forum or filing a bug. Interested in switching channels? Find out how. You can submit feedback using ‘Report an issue...’ in the Chrome menu (3 vertical dots in the upper right corner of the browser).
Josafat Garcia
Google Chrome

During college, while doing a geophysics internship aboard an oil rig, I realized that software was the future—so I switched my major to computer science. After more than a decade working at Google, I had a similar moment where I realized that AI is the future of computer science. Today, I lead Google’s machine learning education effort, in the hope of making AI and its benefits accessible to everyone.

AI can solve complex problems and has the potential to transform entire industries, which means it's crucial that AI reflect a diverse range of human perspectives and needs. That’s why part of Google AI’s mission is to help anyone interested in machine learning succeed—from researchers, to developers and companies, to students like Abu.

To help everyone understand how AI can solve challenging problems, we’ve created a resource called Learn with Google AI. This site provides ways to learn about core ML concepts, develop and hone your ML skills, and apply ML to real-world problems. From deep learning experts looking for advanced tutorials and materials on TensorFlow, to “curious cats” who want to take their first steps with AI, anyone looking for educational content from ML experts at Google can find it here.

Our engineering education team originally developed this fast-paced, practical introduction to ML fundamentals for Googlers. So far, more than 18,000 Googlers have enrolled in MLCC, applying lessons from the course to enhance camera calibration for Daydream devices, build virtual reality for Google Earth, and improve streaming quality at YouTube. MLCC's success at Google inspired us to make it available to everyone.

There’s more to come from Learn with Google AI, including additional courses and documentation. We’re excited to help everyone learn more about AI.

As with every new version of the AdWords API, please carefully review all changes in the release notes and the v201802 migration guide. The updated client libraries and code examples will be published within the next 48 hours.

If you have any questions or need help with migration, please contact us via the forum.

- Josh Radcliff on behalf of the AdWords API Team

You might have seen that we announced new features in G Suite to help teams transform how they work, including Hangouts Chat, a new messaging platform for enterprise collaboration on web and mobile. Perhaps more interesting is that starting today you'll be able to craft your own bot integrations using the Hangouts Chat developer platform and API.

Now, you can create bots to streamline work—automate manual tasks or give your users new ways to connect with your application, all with commands issued from chat rooms or direct messages (DMs). Here are some ideas you might consider:

For example, a bot can take a location from a user, look it up using the Google Maps API, and display the resulting map right within the same message thread in Hangouts Chat. The bot output you see in the image below is generated from the Apps Script bot integration. It returns the JSON payload just below the same image shown on this page in the documentation. 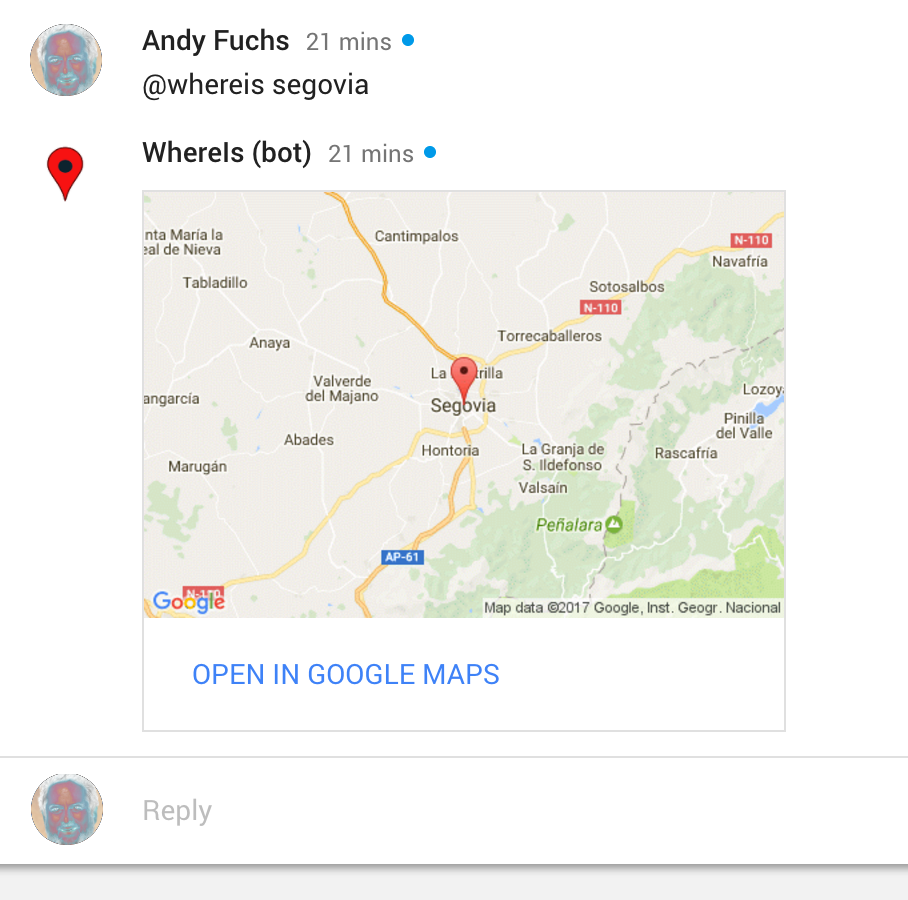 When messages are sent to an Apps Script bot, the onMessage() function is called and passed an event object. The code below extracts the bot name as well as the location requested by the user. The location is then passed to Google Maps to create the static map as well as an openLink URL that takes the user directly to Google Maps if either the map or "Open in Google Maps" link is clicked.

Finally, this function returns everything Hangouts Chat needs to render a UI card assuming the appropriate links, data and Google Maps API key were added to the response JSON payload. It may be surprising, but this is the entire bot and follows this common formula: get the user request, collate the results and respond back to the user.

When results are returned immediately like this, it's known as a synchronous bot. Using the API isn't necessary because you're just responding to the HTTP request. If your bot requires additional processing time or must execute a workflow out-of-band, return immediately then post an asynchronous response when the background jobs have completed with data to return. Learn more about bot implementation, its workflow, as well as synchronous vs. asynchronous responses.

Developers are not constrained to using Apps Script, although it is perhaps one of the easiest ways to create and deploy bots. Overall, you can write and host bots on a variety of platforms:

No longer are chat rooms just for conversations. With feature-rich, intelligent bots, users can automate tasks, get critical information or do other heavy-lifting with a simple message. We're excited at the possibilities that await both developers and G Suite users on the new Hangouts Chat platform and API.

Editor’s Note: Talks at Google is our regular speaker series that brings interesting speakers and brilliant minds from all industries and backgrounds to Google campuses. Each month, we select a few favorite talks from that month, or about a particular topic.

Every year, some of the world’s most celebrated actors, actresses and others in the film industry are nominated for Academy Awards, and a lucky few of the nominees have 45 seconds to give their acceptance speeches on stage. At Google, we’ve gotten to hear from them for a bit longer than that.

In honor of the big awards ceremony this weekend, we’ve pulled together a list of the Oscar-nominated/winning actors, actresses and filmmakers who have stopped by Google over the years.

And nominees and winners from previous years:

We’ve got a few more seconds before the “wrap it up” music starts—if you have time to watch more, check out the 2017 Talks at Google Year in Review, subscribe to Talks at Google on YouTube, follow them on Twitter or browse their website.

We just announced some new G Suite products and features to help your organization collaborate more effectively and efficiently. As part of that announcement, we introduced automatic room suggestions in Google Calendar, which will be launching to all G Suite editions in the coming months. Below are some admin-specific details about automatic room suggestions to help you get started.

This tool will automatically suggest rooms optimized for each attendee based on their building and floor location, previous booking history, audio/video equipment needs and room capacity requirements. To unlock this feature, admins will have to add detailed meeting room information into Calendar. G Suite administrators can use this resource to learn more about inputting their organization’s room information into Calendar.

Closer to the launch, there will be more information on how to enable this feature, such as adding main user work locations to user profiles. Keep an eye on the G Suite Updates blog for more information.

We just announced some new G Suite products and features to help your organization collaborate more effectively and efficiently. As part of that announcement, we introduced Hangouts Chat as a core service. Below are some admin-specific details about Hangouts Chat to help you get started.

Additionally, if you require Vault support for use of Hangouts Chat, please see our post for details on that launch.

If you have any further questions, check out the get started guide or visit the Help Center.

Editions:
Available to all G Suite editions except Government

We just announced some new G Suite products and features to help your organization collaborate more effectively and efficiently. As part of that announcement, we introduced Google Vault support for Hangouts Chat. Below are some admin-specific details to help you get started.

The newly launched Hangouts Chat is an intelligent and secure tool that makes team collaboration easy. An enterprise-ready solution, Hangouts Chat gives G Suite admins the governance controls they need to manage and secure their organization’s data, including full support in Google Vault—a tool that can help with their eDiscovery and compliance needs.

You can also set custom retention rules for specific organizational units (OUs), which apply to direct messages only, and/or for all rooms, which apply to room conversations only. This allows you to manage the lifecycle of direct and room messages separately. Custom rules override the default rule and, if multiple custom rules apply to a message, the rule with the longest retention coverage period takes precedence. 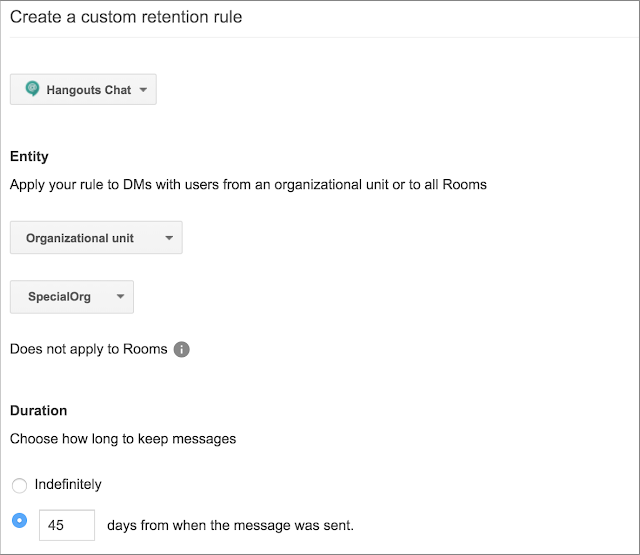 Doing so will preserve room conversations in which a held user is a participant (i.e. they’ve sent a message) and direct messages in which a held user is a member (i.e. they’ve sent or received a message), regardless of whether that user deletes those messages. If a user on hold deletes a message, it will appear deleted to them—but it will be available in Vault until the hold is removed. Remember that holds always take precedence over retention rules. 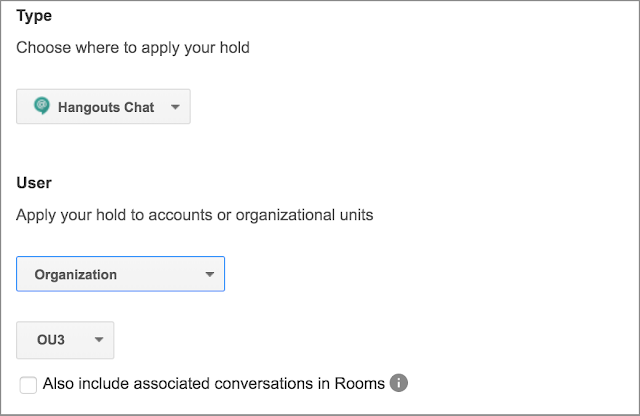 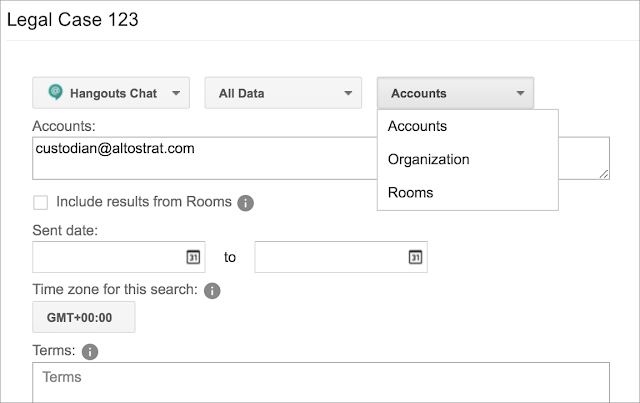 To learn more about how Vault's support for Hangouts Chat can help your organization meet its legal obligations and archiving needs, check out the Vault Help Center.

We just announced some new G Suite products and features to help your organization collaborate more effectively and efficiently. As part of that announcement, we introduced Quick Access for Google Docs. Below are some admin-specific details about Quick Access for Docs to help you get started.

Quick Access for Docs uses artificial intelligence to suggest relevant files based on signals like Drive activity and information in your documents, so you can work with the most up-to-date information and create new material quickly.
Please note that Quick Access for Docs is only available in domains with Google Cloud Search enabled.
For more information on turning Cloud Search on or off for you users, visit the Help Center.

More Information
Help Center: See and use suggested content in a document
The Keyword: New ways to help teams work faster and smarter with G Suite