This new runtime marks a significant update to App Engine and was enabled by new open source software that we recently released: gVisor and FTL.

Python, straight from the source

Running Python 3.7 on App Engine and Cloud Functions required us to fundamentally rethink our infrastructure. Traditionally, meeting Google Cloud’s security requirements meant that we had to run a modified version of the Python interpreter. However, using a modified interpreter constrained some language features and only allowed us to support a limited set of whitelisted Python libraries.

Thanks to gVisor, a container sandbox that provides improved security and process isolation, we can now run the unmodified Python 3.7.0 interpreter. We’ve done extensive testing to make sure Python 3.7 is compatible with gVisor. As part of our compatibility testing, we run Python’s full suite of language tests, and tests for Python packages that are popular on PyPI. We’re committed to ensuring that everything you’ve come to know and love about Python is supported on our platform.

Most importantly, this change in our infrastructure makes it easier to take advantage of Python’s vast ecosystem. As a developer, you just add project dependencies to a requirements.txt file and deploy.

During deployment, FTL, a tool for building containers, fetches dependencies listed in your requirements.txt file and installs them alongside your app or function. FTL also includes a short-lived dependency cache, which speeds up repeated deployments if no changes are detected in your requirements.txt file. This is particularly useful if you find just need to re-deploy because you found a typo.

Keeping up with the Pythonistas

In making these changes, we also decided to expand the list of system packages that are included with each runtime’s Ubuntu 18.04 distribution. We think that will make life just a little bit easier for developers working with the latest release of Python.

Looking forward, we’re excited about how these changes will allow us to keep up with the Python community’s progress as they release new versions and libraries. Please let us know what you think and if you run into any challenges.

You can learn more about how to get started with it on App Engine and Cloud Functions in our documentation. We can’t wait to see what you build with Python 3.7. 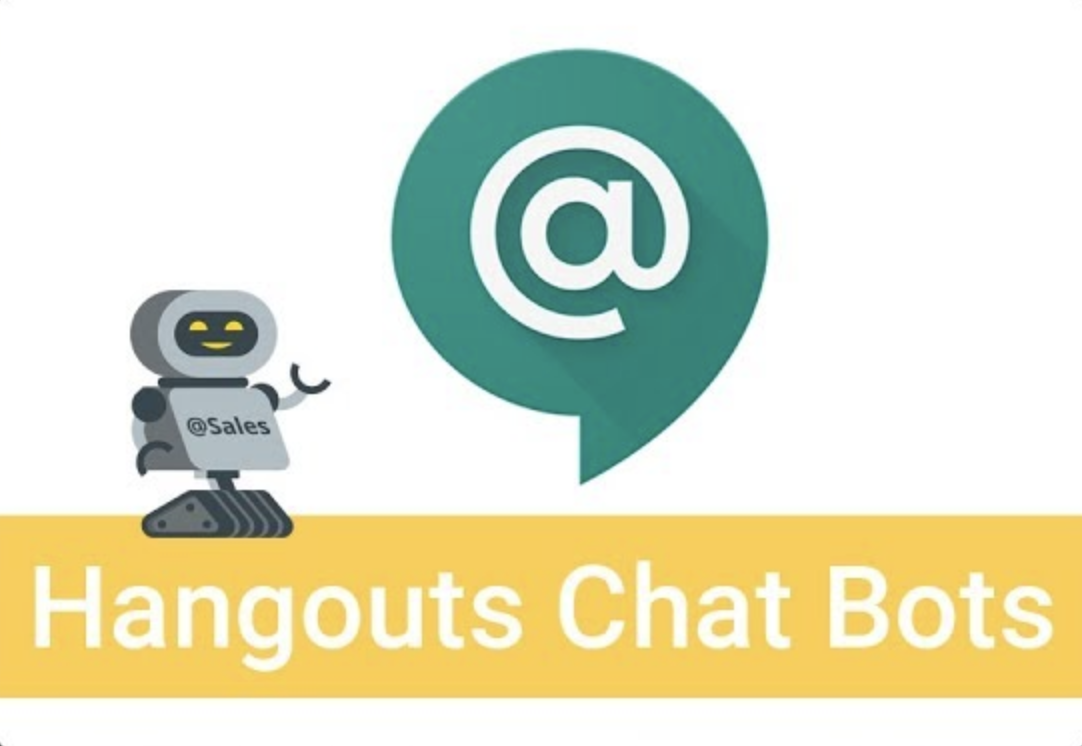 We recently introduced Hangouts Chat to general availability. This next-generation messaging platform gives G Suite users a new place to communicate and to collaborate in teams. It features archive & search, tighter G Suite integration, and the ability to create separate, threaded chat rooms. The key new feature for developers is a bot framework and API. Whether it's to automate common tasks, query for information, or perform other heavy-lifting, bots can really transform the way we work.

As you can see in the video, the most important thing when bots receive a message is to determine the event type and take the appropriate action. For example, a bot will perform any desired "paperwork" when it is added to or removed from a room or direct message (DM), generically referred to as a "space" in the vernacular.

Receiving an ordinary message sent by users is the most likely scenario; most bots do "their thing" here in serving the request. The last event type occurs when a user clicks on an interactive card. Similar to receiving a standard message, a bot performs its requisite work, including possibly updating the card itself. Below is some pseudocode summarizing these four event types and represents what a bot would likely do depending on the event type:

The bot pseudocode as well as the bot featured in the video respond synchronously. Bots performing more time-consuming operations or those issuing out-of-band notifications, can send messages to spaces in an asynchronous way. This includes messages such as job-completed notifications, alerts if a server goes down, and pings to the Sales team when a new lead is added to the CRM (Customer Relationship Management) system.

Hangouts Chat supports more than JavaScript or Python and Google Apps Script or Google App Engine. While using JavaScript running on Apps Script is one of the quickest and simplest ways to get a bot online within your organization, it can easily be ported to Node.js for a wider variety of hosting options. Similarly, App Engine allows for more scalability and supports additional languages (Java, PHP, Go, and more) beyond Python. The bot can also be ported to Flask for more hosting options. One key takeaway is the flexibility of the platform: developers can use any language, any stack, or any cloud to create and host their bot implementations. Bots only need to be able to accept HTTP POST requests coming from the Hangouts Chat service to function.

At Google I/O 2018 last week, the Hangouts Chat team leads and I delivered a longer, higher-level overview of the bot framework. This comprehensive tour of the framework includes numerous live demos of sample bots as well as in a variety of languages and platforms. Check out our ~40-minute session below.

To help you get started, check out the bot framework launch post. Also take a look at this post for a deeper dive into the Python App Engine version of the vote bot featured in the video. To learn more about developing bots for Hangouts Chat, review the concepts guides as well as the "how to" for creating bots. You can build bots for your organization, your customers, or for the world. We look forward to all the exciting bots you're going to build!

Popular mobile games can attract millions of players and generate terabytes of game-related data in a short burst of time. This places extraordinary pressure on the infrastructure powering these games and requires scalable data analytics services to provide timely, actionable insights in a cost-effective way.

To address these needs, a growing number of successful gaming companies use Google’s web-scale analytics services to create personalized experiences for their players. They use telemetry and smart instrumentation to gain insight into how players engage with the game and to answer questions like: At what game level are players stuck? What virtual goods did they buy? And what's the best way to tailor the game to appeal to both casual and hardcore players?


Some Cloud Dataflow features are especially useful in a mobile context since messages may be delayed from the source due to mobile Internet connection issues or batteries running out. Cloud Dataflow's built-in session windowing functionality and triggers aggregate events based on the actual time they occurred (event time) as opposed to the time they're processed so that you can still group events together by user session even if there's a delay from the source.

But why choose between one or the other pattern? A key benefit of this architecture is that you can write your data pipeline processing once and execute it in either batch or streaming mode without modifying your codebase. So if you start processing your logs in batch mode, you can easily move to real-time processing in the future. This is an advantage of the high-level Cloud Dataflow model that was released as open source by Google. 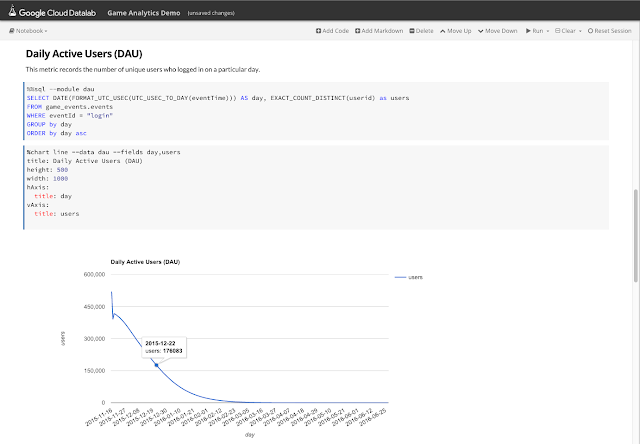 Cloud Dataflow loads the processed data into one or more BigQuery tables. BigQuery is built for very large scale, and allows you to run aggregation queries against petabyte-scale datasets with fast response times. This is great for interactive analysis and data exploration, like the example screenshot above, where a simple BigQuery SQL query dynamically creates a Daily Active Users (DAU) graph using Google Cloud Datalab. 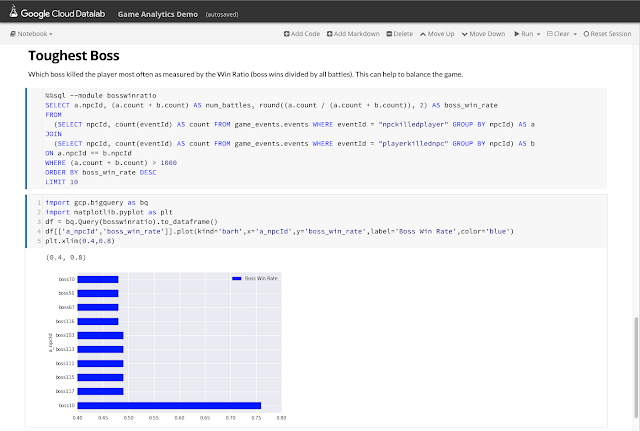 And what about player engagement and in-game dynamics? The BigQuery example above shows a bar chart of the ten toughest game bosses. It looks like boss10 killed players more than 75% of the time, much more than the next toughest. Perhaps it would make sense to lower the strength of this boss? Or maybe give the player some more powerful weapons? The choice is yours, but with this reference architecture you'll see the results of your changes straight away. Review the new reference architecture to jumpstart your data-driven quest to engage your players and make your games more successful, contact us, or sign up for a free trial of Google Cloud Platform to get started.

Not having a full view of administrative actions in your Google Cloud Platform projects can make it challenging and slow going to troubleshoot when an important application breaks or stops working. It can also make it difficult to monitor access to sensitive data and resources managed by your project. That’s why we created Google Cloud Audit Logs, and today they’re available in beta for App Engine and BigQuery. Cloud Audit Logs help you with your audit and compliance needs by enabling you to track the actions of administrators in your Google Cloud Platform projects. They consist of two log streams: Admin Activity and Data Access.


Admin Activity audit logs contain an entry for every administrative action or API call that modifies the configuration or metadata for the related application, service or resource, for example, adding a user to a project, deploying a new version in App Engine or creating a BigQuery dataset. You can inspect these actions across your projects on the Activity page in the Google Cloud Platform Console.

Data Access audit logs contain an entry for every one of the following events:


There are many additional uses of Audit Logs beyond audit and compliance needs. In particular, the BigQuery team has put together a collection of examples that show how you can use Audit Logs to better understand your utilization and spending on BigQuery. We’ll be sharing more examples in future posts.

Accessing the Logs
Both of these logs are available in Google Cloud Logging, which means that you’ll be able to view the individual log entries in the Logs Viewer as well as take advantage of the many logs management capabilities available, including exporting the logs to Google Cloud Storage for long-term retention, streaming to BigQuery for real-time analysis and publishing to Google Cloud Pub/Sub to enable processing via Google Cloud Dataflow. The specific content and format of the logs can be found in the Cloud Logging documentation for Audit Logs.


Audit Logs are available to you at no additional charge. Applicable charges for using other Google Cloud Platform services (such as BigQuery and Cloud Storage) as well as streaming logs to BigQuery will still apply. As we find more ways to provide greater insight into administrative actions in GCP projects, we’d love to hear your feedback. Share it here: [email protected].