Different screens on different browsers: You may see different flows on Chrome, Safari, Firefox, Edge, and other browsers. Previously the service provider (Google) was responsible for showing these dialogs. Now the web browser is responsible. As a result, the flow may be different on each browser.

Expanded Bluetooth security key support: Bluetooth keys will start rolling out, and can be enabled with a flag on Linux. 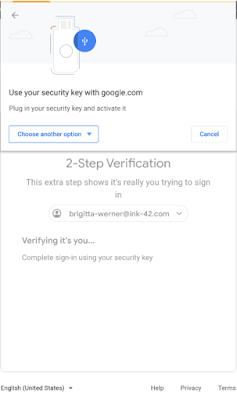 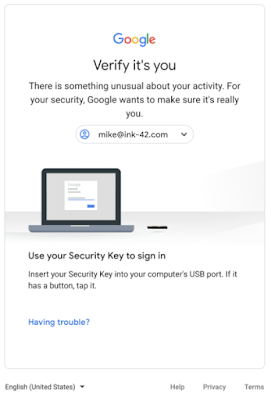 On/off by default?
The updated user interface will be ON by default.

We’re opening a beta program for dynamic email in Gmail. Dynamic email allows email senders to embed AMP into messages themselves, making them more actionable and updating them with the most current information.

Dynamic emails make emails more useful and interactive in Gmail. Your emails can stay up to date so you’re always seeing the freshest information, like seeing the latest comment threads from Docs, or taking actions, like filling out forms, or replying to comments inline directly from within the message itself.

This feature is currently only available in Gmail on the web, with mobile coming soon. Email senders who wish to send dynamic emails must register with Google before their messages appear for end users. For more information on how dynamic email works with Vault, check out the Help Center.

To provide admins better tools to improve the overall performance of their Hangouts Meet devices, we’ve introduced a new set of actionable alerts when issues with peripherals are detected. We’ve also made the alerts for detected connectivity/network issues actionable with richer information and direct access to the device information page. New information in the alerts include: 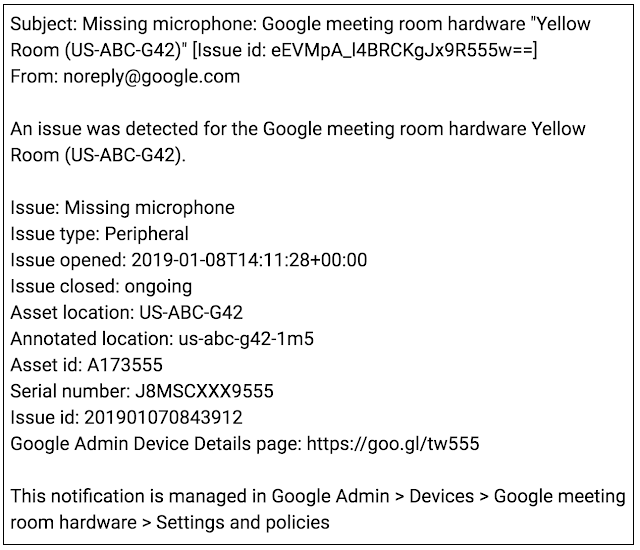 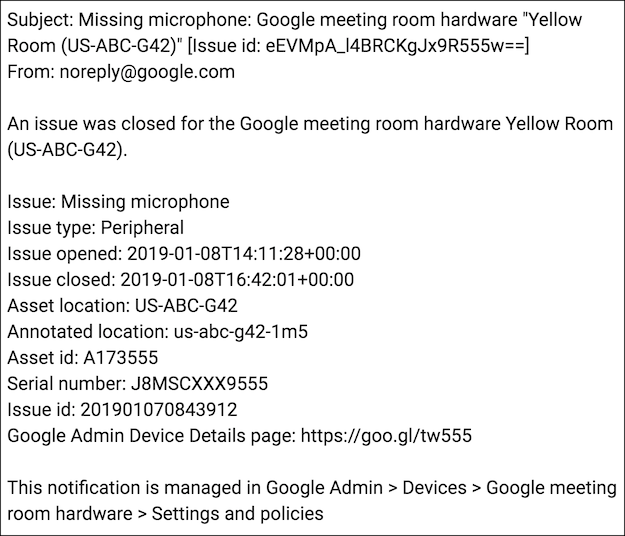 For text message, alerting is only sent out when an issue is detected, not on close.

Both alert types are optional and delivery can be enabled individually by email and/or text message (SMS) (US/Canada numbers only). The email format is intended for easy integration with automated ticketing systems.


Stay up to date with G Suite launches

We’re launching a beta program for a new feature that allows users to search for Google Drive files that they have access to when using the Chrome Omnibox (search/URL box). Users in the beta can now search for files in Drive by owner or type, where previously they could only search for a title or URL of a webpage. This feature is similar to what users see when searching for files in Google Drive.

Admins for G Suite Business, Enterprise, Education, Enterprise for Education, and Nonprofits can learn more and apply for the beta here.

This feature will give users faster access to the files and data they need while searching in Google Chrome. Users will now be able to see Google Docs, Sheets, Slides, PDFs, and other file type suggestions from both “My Drive” and “Shared with Me” when searching in Chrome browser. This will help people get work done faster.

This feature will be available to users signed into a Chrome profile on any operating system: Chromebook, Mac, Windows, etc.

For more details and how to apply for the beta, see this form.
Learn what sync settings users can manage and how they are managed.
How to enable or disable chrome Sync.

Based on your feedback following our previous announcement, Changes to Google Groups settings starting May 6, 2019, we’re making the following changes:

Use our Help Center to see details of these changes and see how you can prepare for the update.

We hope these resources will help you better understand and prepare for the changes to Groups settings.

Groups API improvements
On March 25th, 2019, we’ll be updating the Groups Settings API. These updates align the API with the product changes we’re making (outlined in our previous announcement and this post) and mean it’s easier to use the API to prepare. API updates include:


See our Cloud blog post for more details on these API changes and how to use them.

“Post as the group” will not be merged into the content moderator setting
Previously we stated that this setting would be merged. However, you told us that it was valuable and we should keep it separate, so we’re updating the plans and will not merge it.

New worksheet to help visualize changes
We’ve created this Google Sheet which will show you what the new settings will be for any group if you input the current settings. This can help you check the settings will be inferred as you want them.

On/off by default?
This feature will be ON by default.
Stay up to date with G Suite launches

From here, Admins can set the ability for users to access Viewers and Viewer trend activity in the dashboard to ON/OFF. To learn more about file activity visibility, see this article in the Help Center.

In Editors:
Within the Activity dashboard, the “View time” tab has been renamed to “Viewers.” From this tab, document owners can see the last time users with Edit access viewed the file and take action to follow-up. To learn more about view history in Docs, Sheets, and Slides, see this Help Center article.

We’re also changing the icon for the Viewers tab — previously it was a clock, now it will be a person. This change is to better indicate the purpose of this tab, which is viewer history, not time viewers spent in the document. 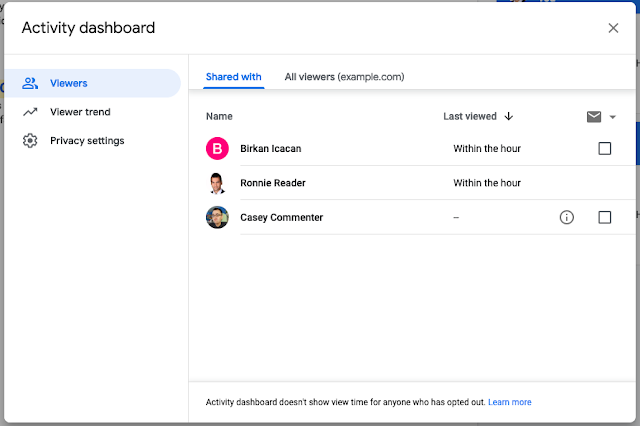 We’ve made it simpler to add images inside of cells in Google Sheets. Previously, it was only possible to insert publicly hosted images into a cell using the IMAGE function.

Now, you can insert any image, like those saved on your desktop or mobile device, into a cell by using the IMAGE function or the new option found inside the Insert menu. 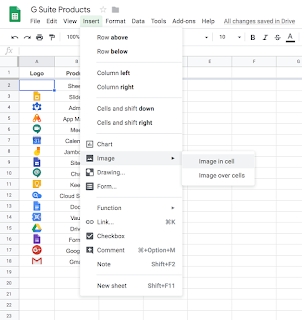 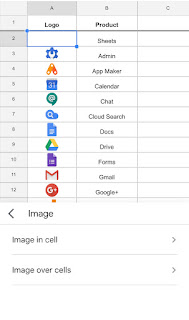 You can have multiple cells containing an image in a Sheet, but note that only one image per cell is possible at the moment.
Images inside cells will be associated with a row and move along with the data—so, if you move rows, filter or sort them, the images will move with the content in the row, unlike previously when images would sit on top of the grid.
Using the formatting and alignment tools, you can pin the image to a specific corner of the cell or set the alignment how you’d like. By default, images will align to the bottom left corner of the cell.

Help Center: Add an image to a spreadsheet

We’re adding three highly-requested features to Tasks. You can now:

We’ve heard from you that you’d like Tasks to be the one destination to track what you need to do in G Suite. These features will help make sure all of your to-dos are in Tasks, and ensure that you can keep track of the deadlines associated with them. Additionally, importing reminders to Tasks can help your users if your organization is currently transitioning from Inbox to Gmail.

New time features
Every task now has two time-based properties, date and start time, that are available in the edit screen of each task.

These tasks will then show up in Google Calendar on the web at their specific time, as long as you have the “Tasks” calendar enabled on the left-hand side. If you’ve enabled mobile notifications, you'll also get notified for tasks at their scheduled dates and times in the Tasks mobile apps (Android/iOS). For tasks that have a date, but don’t have a time, you’ll get notifications at 9am local time. 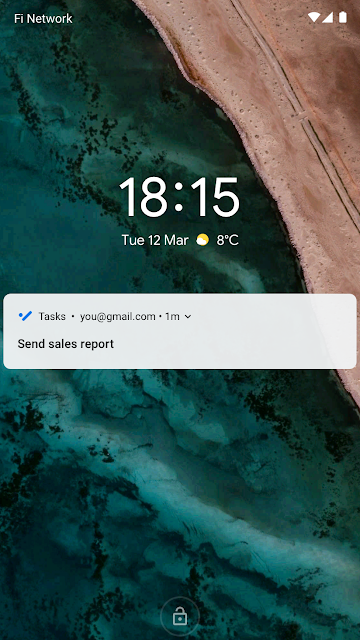 If a task wasn’t marked as completed, you’ll get a second notification at 9am the day after a task was due.

Importing reminders into Tasks
This import tool will pull your reminders (from Inbox/Gmail, Calendar, or the Assistant) into Tasks.

When importing reminders into Tasks, we’ll copy over the title, date, time and recurrence of the reminder. Please note, reminders with locations associated will not be imported. Additionally, this is a one-time import and not a constant sync.

On/off by default?
Stay up to date with G Suite launches

We’re launching a new Priority page in Drive as a new way to help you stay focused and get work done. This page will help you access the files you need through a combination of suggestions and workspaces. With the new Priority page, not only are the most relevant files served up to you, but you can take action on them, as well as sort them into workspaces.

We hope this makes accessing your most important files easier and helps you work more efficiently.

You can access the Priority page from the left-hand navigation panel in Drive. Some features you’ll see on the Priority page include:
If users would like to make Priority their default home page, they can do so in their settings, which is accessible via the gear icon in the upper righthand corner. 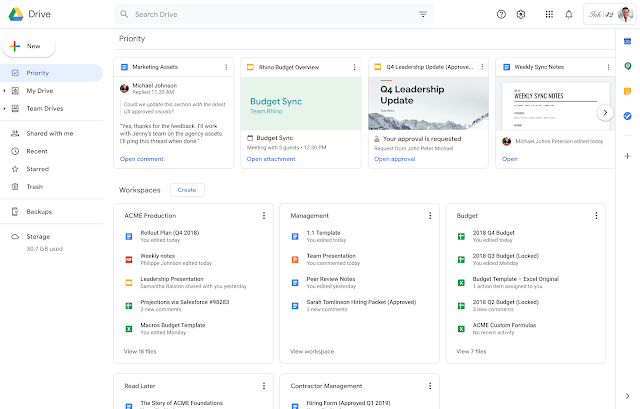 You can now see the creator of a meeting when looking at a “busy” block of time on a resource or room’s schedule in the “Find a time” grid view. Simply hover over the block to see the event creator’s name (even if the event is “Private.”)

We’ve heard from you that being able to see who booked a room for a meeting is crucial in order to easily reach out to the creator to ask if they would be open to swap the room or change the meeting time.

Please note, the information such as the description and title of the event will still be hidden to ensure no sensitive information is shared.


Stay up to date with G Suite launches