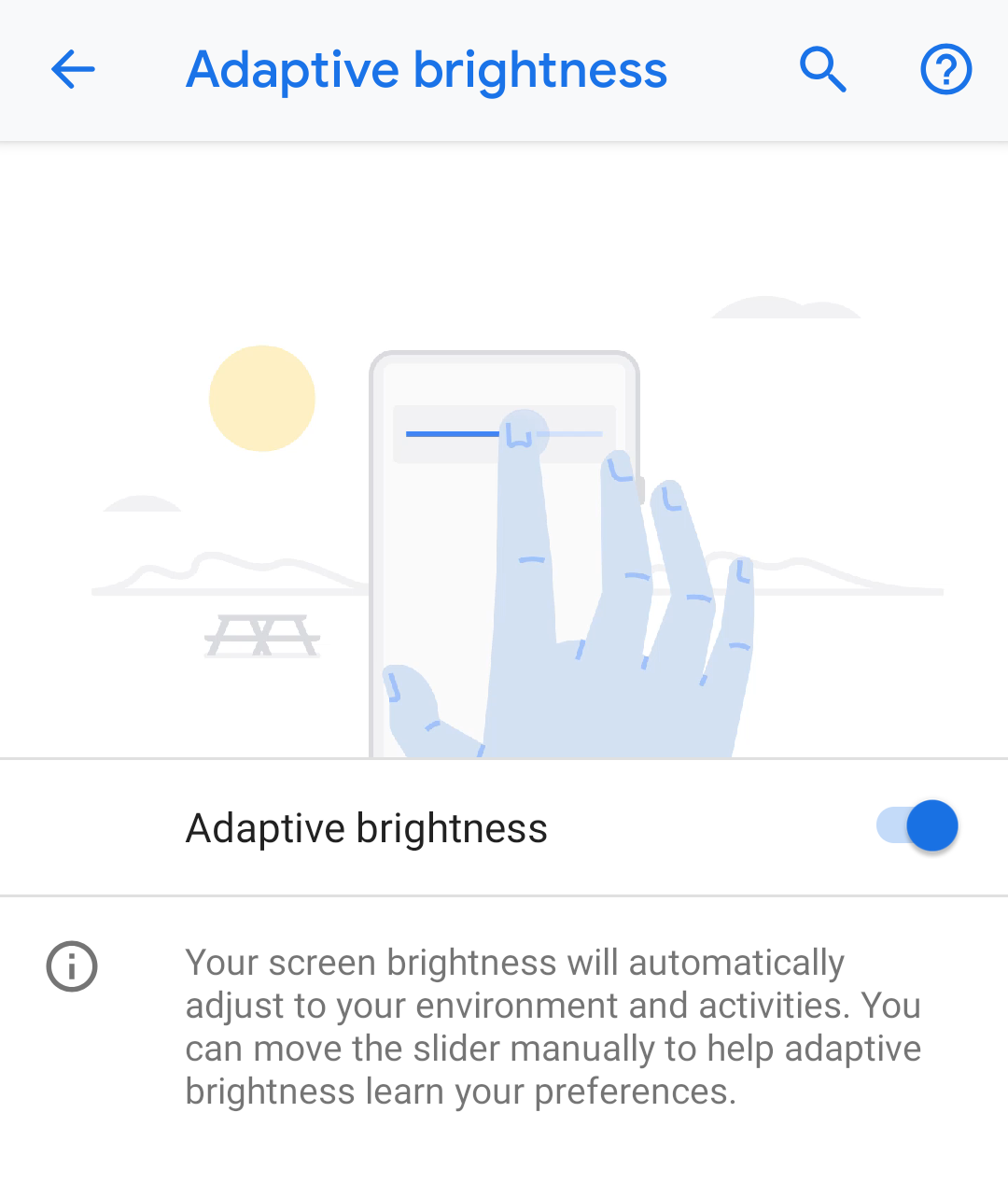 The screen on a mobile device is critical to the user experience. The improved Adaptive Brightness feature in Android P automatically manages the display to match your preferences for brightness level so you get the best experience, whatever the current lighting environment.

* Setting the slider to center resulted in the device using the preset.

* Setting the slider to the left of center applied a negative scale factor, making the screen dimmer than the preset.

* Setting the slider to the right of center applied a positive scale factor, making the screen brighter than the preset.

The slider control now represents absolute screen brightness rather than the global adjustment factor. That means that you may see it move on its own while Adaptive Brightness is on. This is expected behavior!

Humans perceive brightness on a logarithmic rather than linear scale1. That means changes in screen brightness are much more noticeable when the screen is dark versus bright. To match this difference in perception, we updated the brightness slider UI in the notification shade and System Settings app to work on a more human-like scale. This means you may need to move the slider farther to the right than you did on previous versions of Android for the same absolute screen brightness, and that when setting a dark screen brightness you have more precise control over exactly which brightness to set.

What we found is that in many cases this global adjustment factor didn't adequately capture personal preferences - that is, users tended to change the slider often for new lighting environments.

For Android Pie we worked with researchers from DeepMind to build a machine learning model that will observe the interactions that a user makes with the screen brightness slider, and train on-device to personalise the mapping of ambient light level to screen brightness.

This means that Android will learn what screen brightness is comfortable for a user in a given lighting environment. The user teaches it by manually adjusting the slider, and, as the software trains over time, the user should need to make fewer manual adjustments. In testing the feature, we've observed that after a week almost half our test users are making fewer manual adjustments while the total number of slider interactions across all internal test users was reduced by over 10%. The model that we've developed is updatable and will be tuned based on real world usage now that Android Pie has been released. This means that the model will continue to get better over time.

We believe that screen brightness is one of those things that should just work, and these changes in Android Pie are a step towards realizing that. For the best performance no matter where you are models run directly on the device rather than the cloud, and train overnight while the device charges.

At Playtime 2016, Google Play's series of developer events, we met with top app and game developers from around the world to share learnings on how to build successful businesses on Google Play. Several startups, including game developer Peaklabs and audio platform SoundCloud, presented on stage their own best practices for growth, which you might find helpful.

Testing for growth, by Peak

Hear from Kevin Shanahan, Product Manager from Peak, a brain training app, on how to grow sustainably.

One of these tests resulted in a 50% increase in conversions.

Andy Carvell, former Product Manager at SoundCloud, an online audio distribution platform that enables its users to upload, record, promote, and share their originally-created sounds, explains how they focus on retention to improve growth.

Other speakers, such as Silicon Valley VC Greylock, have also shared their tips for startup growth. Watch more sessions from this year's Playtime events to learn best practices from other apps and game partners, and the Google Play team. Get the Playbook for Developers app to stay up to date with news and tips to help you grow a successful business on Google Play.

Inovidea Magna Global, is the developer of PicMix, a photo and video editing app, which has now evolved into an interest based social media platform powered by content discovery and social commerce. It has 27 million users worldwide, 65% of which are outside of its home market in Indonesia.

Hear Calvin Kizana, CEO, and Sandy Colondam, Co-founder, explain how they used Google Play tools, such as Store Listing Experiments and Material Design, to create a high quality app which appeals to a global audience.

Learn more about store listing experiments and find out how to get started with Material Design. Also, get the Playbook for Developers app and stay up-to-date with more features and best practices that will help you grow a successful business on Google Play.