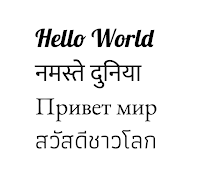 No matter where you or your customers or colleagues are located, we want to make sure Google Docs and Slides work for you at work. That’s why we’re expanding the font catalogue in Docs and Slides to support 62 languages, including non-Latin scripts like Cyrillic and Devanagari (with more coming soon!).

To find these new fonts and others, simply click More fonts at the bottom of the Fonts menu. There you’ll also find suggested fonts, based on your document’s language.