On April 3, 2017, we will shut down older versions of the following Android and iOS applications:


This month, users of these legacy versions will begin seeing the below prompts to upgrade. Please note that after March 1, some users with very old versions will be forced to upgrade when they receive the prompt. 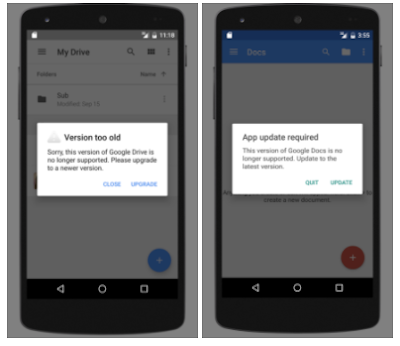 If you are using any of these unsupported versions, we encourage you to download and install the latest version of that mobile application. Note that corresponding web and desktop applications will not be affected by this change. On most devices, you can find an app’s version type in its settings menu.