Android powers over 2 billion devices, and Android phones are made by many different manufacturers. The primary intent of these tools is to enable device manufacturers to see in detail how well the GNSS receivers are working in each particular device design, and thus improve the design and GNSS performance in their devices. However, with the tools publicly available, there is also significant value to the research and app developer community.

How to use the tool

The GNSS Analysis Tool is a desktop application that takes in raw the GNSS Measurements logged from your Android device as input. 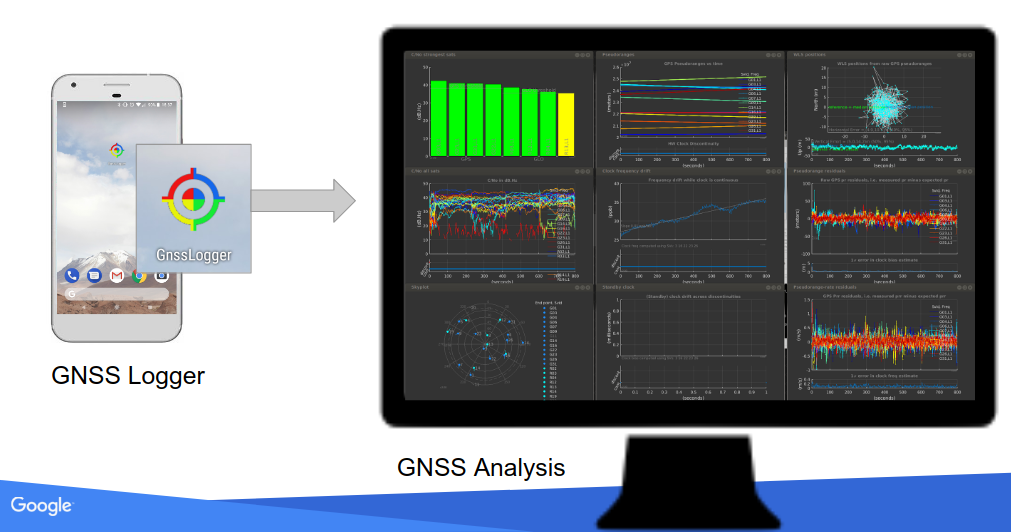 This desktop application provides interactive plots, organized into three columns showing the behavior of the RF, Clock, and Measurements. This data allows you to see the behavior of the GNSS receiver in great detail, including receiver clock offset and drift to the order of 1 nanosecond and 1 ppb and measurement errors on a satellite-by-satellite basis. This allows you to do sophisticated analysis at a level that, until now, was almost inaccessible to anyone but the chip manufacturers themselves.

The tools support multi-constellation (GPS, GLONASS, Galileo, BeiDou and QZSS) and multi-frequency. The image below shows the satellite locations for L1, L5, E1 and E5 signals tracked by a dual frequency chip. 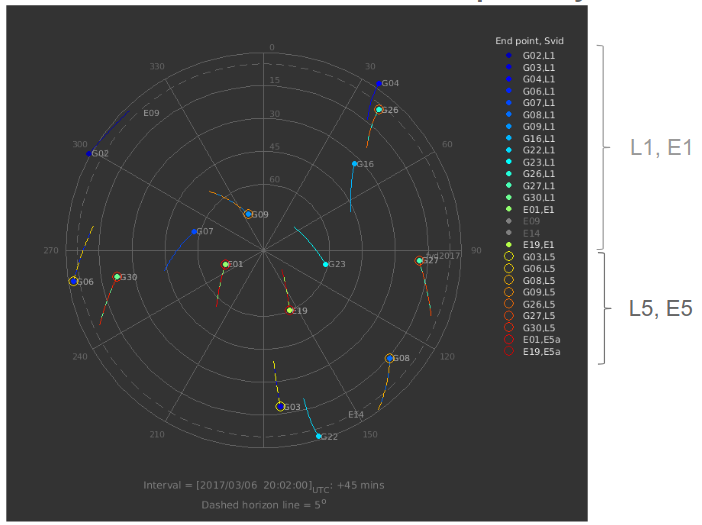 The tools provide an interactive control screen from which you can manipulate the plots, shown below. From this control screen, you can change the background color, enable the Menu Bars for printing or saving, and select specific satellites for the plots. 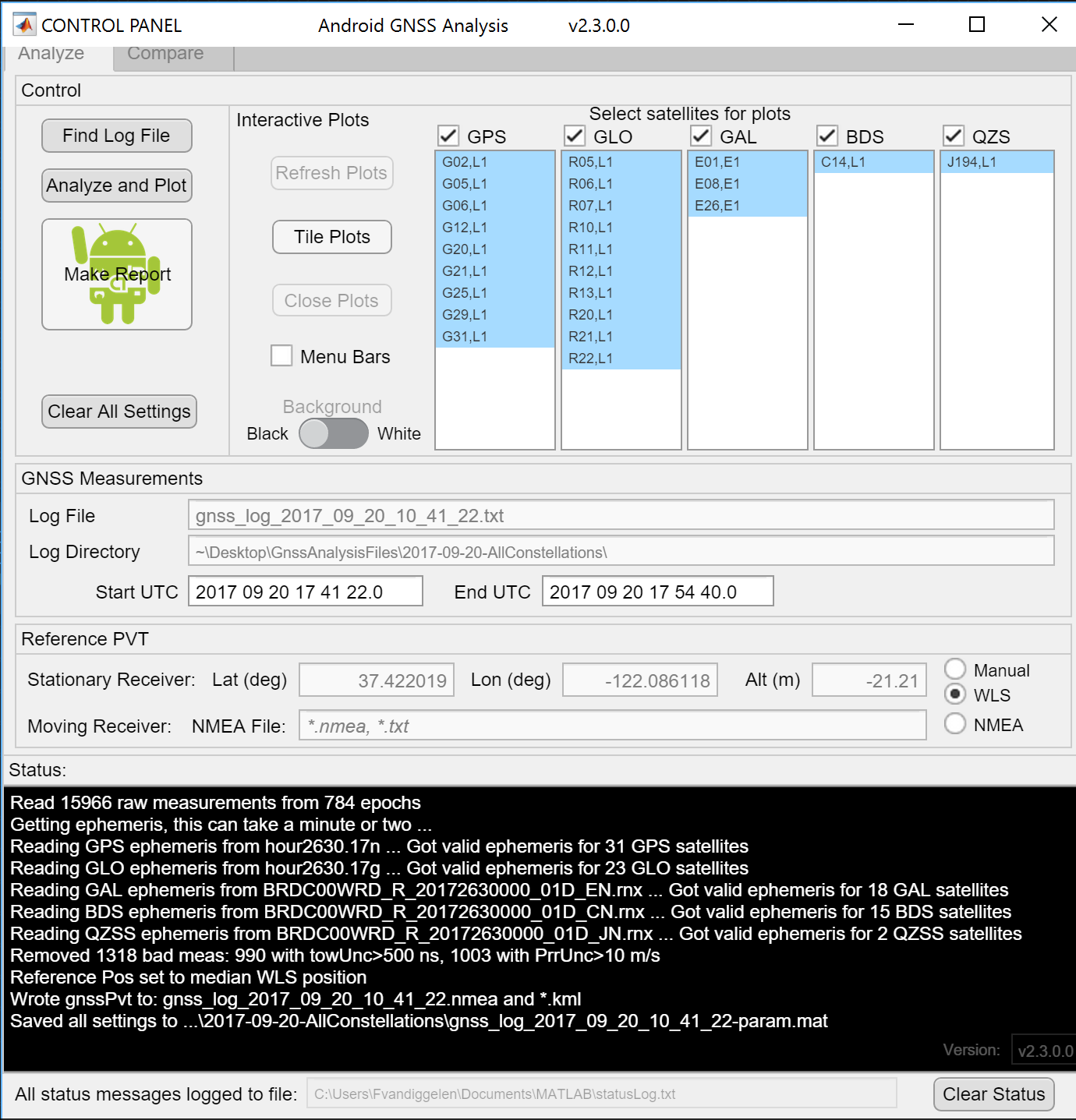 The tools also provide automatic test reports of receivers. Click "Make Report" to automatically create the test report. The report evaluates the API implementation, Received Signal, Clock behavior, and Measurement accuracy. In each case it will report PASS or FAIL based on the performance against known good benchmarks. This test report is primarily meant for the device manufacturers to use as they iterate on the design and implementation of a new device. A sample report is shown below. 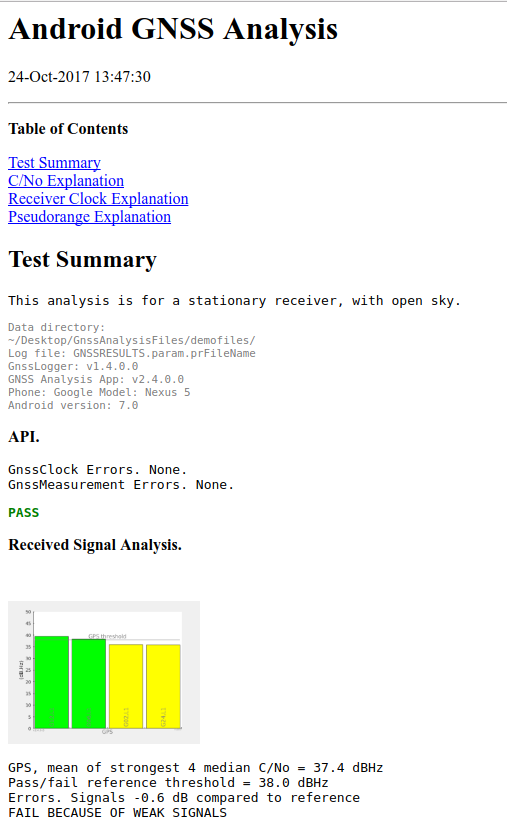 Our goal with providing these Analysis Tools is to empower device manufacturers, researchers, and developers with data and knowledge to make Android even better for our customers. You can visit the GNSS Measurement site to learn more and download this application. 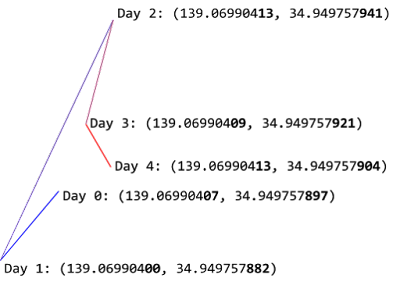