Today, we want to share some best practices on using the OpenGL Shading Language (GLSL) that can optimize the performance of your game and simplify your workflow. Specifically, Layout qualifiers make your code more deterministic and increase performance by reducing your work.

Let’s start with a simple vertex shader and change it as we go along.

This basic vertex shader takes position and texture coordinates, transforms the position and outputs the data to the fragment shader:

To draw a mesh on to the screen, you need to create a vertex buffer and fill it with vertex data, including positions and texture coordinates for this example.

In our sample shader, the vertex data may be laid out like this:
Therefore, we defined our vertex shader attributes like this:
To associate the vertex data with the shader attributes, a call to glGetAttribLocation will get the handle of the named attribute. The attribute format is then detailed with a call to glVertexAttribPointer.
But you may have multiple shaders with the vertexPosition attribute and calling glGetAttribLocation for every shader is a waste of performance which increases the loading time of your game.

Using layout qualifiers you can change your vertex shader attributes declaration like this:
To do so you also need to tell the shader compiler that your shader is aimed at GL ES version 3.1. This is done by adding a version declaration:
Let’s see how this affects our shader, changes are marked in bold:
Note that we also changed outTexCoord from varying to out. The varying keyword is deprecated from version 300 es and requires changing for the shader to work.

Note that Vertex Attribute qualifiers and #version 300 es are supported from OpenGL ES 3.0. The desktop equivalent is supported on OpenGL 3.3 and using #version 330.

Now you know your position attributes always at 0 and your texture coordinates will be at 1 and you can now bind your shader format without using glGetAttribLocation:
This simple change leads to a cleaner pipeline, simpler code and saved performance during loading time.

To learn more about performance on Android, check out the Android Performance Patterns series.

If you develop a performance-intensive 3D game, you’re always looking for ways to give users richer graphics, higher frame rates, and better responsiveness. You also want to conserve the user’s battery and keep the device from getting too warm during play. To help you optimize in all of these areas, consider taking advantage of the hardware scaler that’s available on almost all Android devices in the market today.

How it works and why you should use it

Virtually all modern Android devices use a CPU/GPU chipset that includes a hardware video scaler. Android provides the higher-level integration and makes the scaler available to apps through standard Android APIs, from Java or native (C++) code. To take advantage of the hardware scaler, all you have to do is render to a fixed-size graphics buffer, rather than using the system-provided default buffers, which are sized to the device's full screen resolution.

Using the hardware scaler is more efficient for several reasons. First, hardware scalers are extremely fast and can produce great visual results through multi-tap and other algorithms that reduce artifacts. Second, because your app is rendering to a smaller buffer, the computation load on the GPU is reduced and performance improves. Third, with less computation work to do, the GPU runs cooler and uses less battery. And finally, you can choose what size rendering buffer you want to use, and that buffer can be the same on all devices, regardless of the actual screen resolution.

In a mobile GPU, the pixel fill rate is one of the major sources of performance bottlenecks for performance game applications. With newer phones and tablets offering higher and higher screen resolutions, rendering your 2D or 3D graphics on those those devices can significantly reduce your frame rate. The GPU hits its maximum fill rate, and with so many pixels to fill, your frame rate drops. 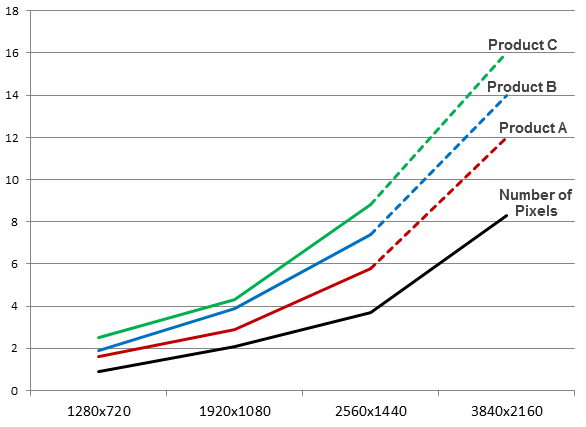 Power consumed in the GPU at different rendering resolutions, across several popular chipsets in use on Android devices. (Data provided by Qualcomm).

To avoid these bottlenecks, you need to reduce the number of pixels that your game is drawing in each frame. There are several techniques for achieving that, such as using depth-prepass optimizations and others, but a really simple and effective way is making use of the hardware scaler.

Instead of rendering to a full-size buffer that could be as large as 2560x1600, your game can instead render to a smaller buffer — for example 1280x720 or 1920x1080 — and let the hardware scaler expand your scene without any additional cost and minimal loss in visual quality.

A performance-intensive game can tend to consume too much battery and generate too much heat. The game’s power consumption and thermal conditions are important to users, and they are important considerations to developers as well.

As shown in the diagram, the power consumed in the device GPU increases significantly as rendering resolution rises. In most cases, any heavy use of power in GPU will end up reducing battery life in the device.

In addition, as CPU/GPU rendering load increases, heat is generated that can make the device uncomfortable to hold. The heat can even trigger CPU/GPU speed adjustments designed to cool the CPU/GPU, and these in turn can throttle the processing power that’s available to your game.

For both minimizing power consumption and thermal effects, using the hardware scaler can be very useful. Because you are rendering to a smaller buffer, the GPU spends less energy rendering and generates less heat.

Android gives you easy access to the hardware scaler through standard APIs, available from your Java code or from your native (C++) code through the Android NDK.

All you need to do is use the APIs to create a fixed-size buffer and render into it. You don’t need to consider the actual size of the device screen, however in cases where you want to preserve the original aspect ratio, you can either match the aspect ratio of the buffer to that of the screen, or you can adjust your rendering into the buffer.

From your Java code, you access the scaler through SurfaceView, introduced in API level 1. Here’s how you would create a fixed-size buffer at 1280x720 resolution:

If you want to use the scaler from native code, you can do so through the NativeActivity class, introduced in Android 2.3 (API level 9). Here’s how you would create a fixed-size buffer at 1280x720 resolution using NativeActivity:

By specifying a size for the buffer, the hardware scaler is enabled and you benefit in your rendering to the specified window.

Choosing a size for your graphics buffer

If you will use a fixed-size graphics buffer, it's important to choose a size that balances visual quality across targeted devices with performance and efficiency gains.

For most performance 3D games that use the hardware scaler, the recommended size for rendering is 1080p. As illustrated in the diagram, 1080p is a sweet spot that balances a visual quality, frame rate, and power consumption. If you are satisfied with 720p, of course you can use that size for even more efficient operations.

If you’d like to take advantage of the hardware scaler in your app, take a look at the class documentation for SurfaceView or NativeActivity, depending on whether you are rendering through the Android framework or native APIs.

Watch for sample code on using the hardware scaler coming soon!
Join the discussion on