The podcast industry is booming, so it’s no wonder savvy marketers are weaving them into their content marketing plans. They are a great way to reach your audience, and podcast listeners are also a loyal bunch: 80% will listen to a full podcast once they’ve started it, and 45% will follow calls to action after hearing them.*
With the marketplace experiencing a growth spurt and over half a million podcasts to choose from, there are no signs of podcasts losing popularity. But, it takes more than a microphone and an idea to attract such a highly engaged crowd. So, here are some tips on creating a podcast that survives the marketing ecosystem and stands out from the crowd.

It can be tempting to follow in the footsteps of the podcast greats, but if you want to generate interest and excitement, you should venture off the beaten path and find your niche topic. To do that, become the market and start researching what’s already out there. Start with something that interests you. Show up in the comments on some of the podcasts that you find useful, listen to what could be improved, and participate in the forums. Once you gather all your insights, sit down and deep-dive into your findings - an opportunity will be hiding in there, you just need to listen for it.

Be committed and consistent

Team up with like-minded people who enjoy the same type of content, to ensure you are all aligned on tone, topics and what you want to achieve. Building up interest and listenership takes time and effort, so having people pulling in the same direction is key to getting across the finish line. Consistency is key, so commit to a schedule you are comfortable with and stick with it. To set expectations, make sure you post regularly and at the same time.

Don’t be afraid to amp up your promotions or content to be heard. Recycling is great, but reciting the same old repertoire will only get you so far. However, this doesn’t mean that to succeed you have to reinvent the wheel and come up with something completely original.  Instead of thinking brand-new, think better-new. Take something that’s already out there and put a spin on it; introduce a new way of looking at the topic, mix it up with a twist on delivery, or delight with a surprising host choice.
For example, the gaming podcast What’s Good Games is hosted by four female experts who are taking the predominantly male gaming industry by storm. The topic itself isn’t new, but the hosts’ unique insights put them at the top of the leaderboard.

Making your audience feel special and appreciated is a great way to encourage your audience to tune in to your podcast. So, reach out to them on social channels, and reward your audience with exclusive offers, content, and freebies. Shout outs and special mentions at the end of each podcast can also be an excellent incentive for people to stay tuned in until the very end, and it can help you connect with your listeners on a more personal level. Let them know that you’re listening to their thoughts, suggestions, and concerns. Not listening to feedback is the fastest way to isolate your fans, so ensure you’re actively taking notes on what’s working and what could be amplified.

Be loud and proud about your podcast! Learn where your audience lives online, to know how to reach them on channels they love to follow. Make sure to create a call to action - what is it that you would like them to do after listening to your podcast? Visit your website, download your e-book, subscribe to your newsletter? Choose one and sprinkle it at the end of each episode.
Create a buzz around upcoming episodes by teasing your audience with a short audio snippet, sharing fun facts about the topic, and what they will learn if they tune in. Harness the power and reach of social media to let your followers know about your podcast. Don’t be shy about sharing your podcast more than once - the social media landscaping is overflowing with content, and it is more than likely that some people will have missed your original post.
A podcast should be like a pop song - it should be playing on all stations. Make your podcast available on all main directories, such as Google Podcasts, iTunes, Spotify, SoundCloud, Stitcher, TuneIn, Podbay and Podtail to make it easier to find for your audience.

It takes a lot of time and effort to record a podcast. Repurpose that content and publish it across different mediums to make the most of it. Write a blog post using key takeaways from your podcast, publish videos of your podcast recordings on YouTube, create social media posts using quotes from guests, and promote your other content within your podcast. Look at your content marketing engine as an ecosystem that supports each other and helps it thrive.
Starting a podcast is no easy feat - it requires a lot of time to build up your audience, and hard work to cut through the white noise. But with a little planning, commitment, and research, this could become your path to a regular, highly engaged audience. Check out the video below for more tips on podcasts that resonate, and the Google Partners Podcast for more marketing insights and these tips in action.
*Source: Podcast Insights

After a while we started receiving emails from listeners that wanted to access our podcast on YouTube. Even though this might seem strange for those that love podcasts and have their favorite app on their phones, we decided that the customer is always right: we should post every episode to YouTube.

Ok, so … how? Well, to create a video I need to merge the mp3 audio from an episode with a static image. Let's include the title of the episode and the Google Cloud Platform Podcast logo. 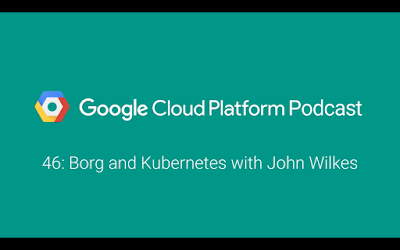 But once we post the video to YouTube we're going to need more than that! We need a description, some tags, and probably a link to the episode (SEO FTW!).

Where can we get that information from? Let's think about this for a minute. Where are others getting this information from? The RSS feed! Would it be possible to create a tool to which I could say "post the video for episode 46" and a couple minutes later the video appeared on YouTube? That'd be awesome! Let's do that!

The application I wrote parses an RSS feed and given the episodes to publish it downloads the metadata and audio for an episode, generates the corresponding videos, and pushes them to YouTube.
The hardest parts here are the creation of the image and the video. The rest is sending HTTP requests right and left.

After trying a couple of different tools I decided that the easiest was to create the image from scratch in Go using the image package from the standard library and a freetype library available on GitHub.

Probably the most fun part was to be able to choose a font that would make the title fit the image correctly regardless of the length in characters. I ended up creating a loop that:
Surprisingly, for me, this is actually a pretty common practice!

It is also worth mentioning the way I test the package: Using a standard image that I compare to the one generated by the package, then showing a "diff" image where all the pixels that differ are highlighted in red.
The code for this package is available here.

From the beginning I knew I would end up using ffmpeg to create my video. Why? Well, because it is as simple as running this command:


Easy right? Well, this is once ffmpeg has been installed and correctly configured, which is actually not that simple and would make this tool hard to install on any machine.

That's why the whole tool runs on Docker. Docker is a pretty widespread technology, and thanks to Makefile I'm able to provide a tool that can be run like this:

It took me a couple of days to write the tool and get it to a point where I could open source it, but it was totally worth it. I know that others will be able to easily reuse it, or even extend it. Who knows, maybe this should be exposed as a web application so anyone can use it, no Docker or Makefile needed!

I am currently using this tool weekly to upload the Google Cloud Platform Podcast episodes to this playlist, and you can find the whole code on this GitHub repository.