If your organization uses SAML to sign users in to G Suite services*, those users will soon see an additional step in the process when using Chrome as their web browser. Starting on May 7th, 2018, after signing in on a SAML provider’s website, they’ll be brought to a new screen on accounts.google.com to confirm their identity. This screen will provide an additional layer of security and help prevent users from unknowingly signing in to an account created and controlled by an attacker. 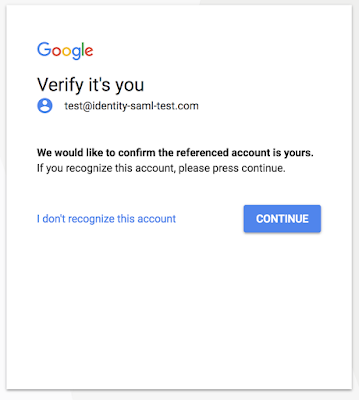 To minimize disruption for the user, this feature will only be shown once per account per device. We’re working on ways to make the feature even more context-aware in the future, meaning your users should see the screen less and less over time.

Protecting against phishing attacks
This new screen is intended to prevent would-be attackers from tricking a user (e.g. via a phishing campaign) into clicking a link that would instantly and silently sign them in to a Google Account the attacker controls. Today, this can be done via SAML single sign-on (SSO), because it doesn’t require a user interaction to complete a sign-in. To protect Chrome users, we’ve added this extra protection.

Creating a consistent identity
This new security feature is part of a larger project to create a consistent identity across Google web services (like Gmail) and native Chrome browser services (like Chrome Sync). This consistency will make it easier for signed-in G Suite users to take advantage of native Chrome browser features, but it requires additional protection during authentication. This new screen adds that protection and reduces the probability that attackers successfully abuse SAML SSO to sign users in to malicious accounts.

Disabling the new screen
If you wish to disable the new screen for your organization, you can use the X-GoogApps-AllowedDomains HTTP header to identify specific domains whose users can access Google services. Users in those domains won’t see this additional screen, as we assume those accounts are trusted by your users. This header can be set in Chrome via the AllowedDomainsForApps group policy.


*This won't impact individuals who sign in to G Suite services directly and those who use G Suite or Cloud Identity as their identity provider. The screen is also not shown on devices running Chrome OS.

Launch Details
Release track:
Launching to both Rapid Release and Scheduled Release on May 7th, 2018