Six years ago, we first introduced Google Earth Timelapse, a global, zoomable time-lapse video that lets anyone explore our changing planet’s surface—from the global scale to the local scale. Earth Timelapse consists of 83 million multi-resolution overlapping video tiles, which are made interactively explorable through the open-source Time Machine client software developed at Carnegie Mellon University’s CREATE Lab. At its core, Google Earth Timelapse is an example of how organizing information can make it more accessible and useful, turning petabytes of satellite imagery into an interactive experience that shows the dynamic changes occurring across space and time.
In April, we introduced several updates to Timelapse, including two additional years of imagery to the time-series visualization, which now spans from 1984 to 2018, with visual upgrades that make exploring more accessible and intuitive. We are especially excited that this update includes support for mobile and tablet devices, which are quickly overtaking desktop computers as the dominant source of app traffic.

Building the Global Visualization
Making a planetary-sized time-lapse video required a significant amount of pixel crunching in Earth Engine, Google's cloud platform for petabyte-scale geospatial analysis. The new release followed a process similar to what we did in 2013, but at a significantly greater scale—turning 15 million satellite images acquired over the last three and a half decades from the USGS/NASA Landsat and European Sentinel programs into 35 cloud-free 4-terapixel images of the planet—one for each year from 1984 to 2018.

At its native resolution, the Timelapse visualization is a 4 terapixel video (that's four trillion pixels), which would take about 12 days to download on a 95 Mb/s internet connection. Most computers would have difficulty playing a video of this size, let alone with an interactive, zoomable interface. The problem is even more severe for a mobile device.

A solution was pioneered by Google Maps in 2004 with the map pyramiding technique. Before that time, navigating a map required the use of directional arrows to pan and zoom, with each step requiring the page to reload. The map pyramiding technique assembles the full map image displayed on-screen from tens of small 256x256 pixel non-overlapping image tiles in an array, with new tiles fetched as needed at an appropriate resolution as the user pans and zooms across the map.
This works very well for maps made of static images, but less so for pyramids of video tiles, such as those used by Timelapse, since it requires a web browser to keep up to 16 videos in sync while interacting with the visualization. The solution is embodied in CREATE Lab’s open source Time Machine software: create much larger video tiles that can cover the entire screen and only show one whole-screen tile at a time. The tiles create a pyramid, where sibling tiles overlap with their neighbors to provide a seamless transition between tiles while panning and zooming. Though the overlapping tiles require the use of about 16x more videos, this pyramid structure enables the use of Timelapse on mobile devices by minimizing the amount of data required for visualization.

In our newest release, the global video pyramid consists of 83 million videos across 13 zoom levels, which required about 2 million CPU hours distributed across thousands of machines in Google Cloud to generate.
Time Travel, Wherever You Are
Prior to April's update, ~30% of visitors to the Timelapse visualization were on mobile devices and didn't actually experience the visualization; instead they saw a YouTube playlist of locations in Timelapse. Until recently, the hardware and CPUs for phones and tablets could not decode videos fast enough without significant delays when someone attempted to zoom in or pan across a video, making mobile exploration unpleasant, if not impossible. In addition, in order for the visualization to be smooth as you pan and zoom, each video that is loaded must sync to the previously playing video and begin playing automatically. But, until only recently, mobile browser vendors had disabled video autoplay at the browser level for bandwidth reasons.

Now that mobile browser vendors have re-enabled video autoplay, we are able to take advantage of current mobile hardware and CPU capabilities, while leveraging the pyramid mapping technique’s efficient use of data, to enable Timelapse on mobile.

Redesigning Timelapse for Exploration Across Devices
Timelapse is a tool for exploration, so we designed for immersiveness, devoting as much real estate as possible to the map. On the other hand, it's not just a map, but a map of videos. So we kept controls visible, like pausing and restarting the timeline or choosing highlights, by leveraging Material Design with simple, clean lines and clear focal areas.
To explore, you need to know where you are or where somewhere else is, so the new interface includes a new "Maps Mode" toggle that lets the user navigate with Google Maps. We also built in scalability to the timeline element of the UI, so that new features added in the future, such as lengthening the time-lapse or adding options for different time increments, won’t break the design. The timeline also allows the user to go backwards in time—an interesting way to compare the present with the past.

For desktop browsers supporting WebGL, we also added a new WebGL viewer to the open source project, which loads and synchronizes multiple videos to fill the screen at optimal resolution. The aesthetic improvement of this is nontrivial, with >4x better resolution.

What's next
We're excited about the abundance of freely available, openly licensed satellite imagery and remote sensing data available, enabling new visualizations across time, space, and the visual and non-visual spectrum. We've found it's often the data combined with supplemental layers, such as the World Database on Protected Areas (WDPA) boundaries, that can spark new insights. For example, seeing the visual connection between declining home ownership and shifts in the city of Pittsburgh's racial makeup tells a story about inequality that numbers on a page simply cannot. Visual evidence can transcend language and cultural barriers and, we hope, generate productive conversations about our global challenges.

"We are trying new methods [of flood modeling] in Earth Engine based on machine learning techniques which we think are cheaper, more scalable, and could exponentially drive down the cost of flood mapping and make it accessible to everyone."
-Beth Tellman, Arizona State University and Cloud to Street

Recently, Google headquarters hosted the Google Earth Engine User Summit 2016, a three-day hands-on technical workshop for scientists and students interested in using Google Earth Engine for planetary-scale cloud-based geospatial analysis. Earth Engine combines a multi-petabyte catalog of satellite imagery and geospatial datasets with a simple, yet powerful API backed by Google's cloud, which scientists and researchers use to detect, measure, and predict changes to the Earth's surface.
Summit attendees could choose among twenty-five hands-on workshops over the course of the three day summit, most generated for the summit specifically, giving attendees an exclusive introduction to the latest features in our platform. The sessions covered a wide range of topics and Earth Engine experience levels, from image classifiers and classifications, time series analysis, building custom web applications, all the way to arrays, matrices, and linear algebra in Earth Engine. 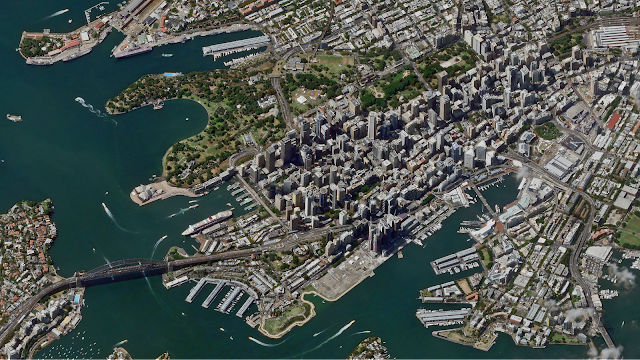 Terra Bella Product Manager, Kristi Bohl, taught a session on using SkySat imagery, like the image above over Sydney, Australia, for change detection. Workshop attendees also learned how to take advantage of the deep temporal stack the SkySat archive offers for change-over-time analyses.
Nick Clinton, a developer advocate for Earth Engine, taught a time series session that covered statistical techniques as applied to satellite imagery data. Students learned how to make graphics like the above, which shows the cross-correlation between Landsat 8 NDVI and the sum of CHIRPS precipitation from the previous month over San Francisco, CA. The correlation should be high for relatively r-selected plants like grasses and weeds and relatively low for perennials, shrubs, or forest.

My workshop session covered how users can upload their own data into Earth Engine and the many different ways to take the results of their analyses with them, including rendering static map tiles hosted on Google Cloud Storage, exporting images, creating new assets, and even making movies, like this timelapse video of all the Sentinel 2A images captured over Sydney Australia.

Along with the workshop sessions, we hosted five plenary speakers and 18 lightning talk presenters. These presenters shared how Earth Engine fits into their research, spanning from drought monitoring, agriculture, conservation, flood risk mapping, and hydrological analysis.

It is always inspiring to see such a diverse group of people come together to celebrate, learn, and share all the amazing and wondrous things people are doing with Earth Engine. It is not only an opportunity for our users to learn the latest techniques; it is also a way for the Earth Engine team to experience the new and exciting ways people are harnessing Earth Engine to solve some of the most pressing environmental issues facing humanity. 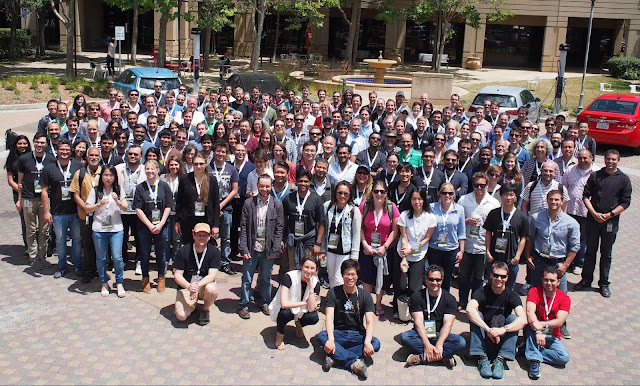 We've already begun planning for next year's user summit, and based on the success of this year's, we're hoping to hold an even larger one.

This year the Google Earth Engine team attended the European Geosciences Union General Assembly meeting in Vienna, Austria to engage with a number of European geoscientific partners. This was just the first of a series of European summits the team has attended over the past few months, including, most recently, the IEEE Geoscience and Remote Sensing Society meeting held last week in Milan, Italy.
We are very excited to be collaborating with many European scientists from esteemed institutions such as the European Commission Joint Research Centre, Wageningen University, and University of Pavia. These researchers are utilizing the Earth Engine geospatial analysis platform to address issues of global importance in areas such as food security, deforestation detection, urban settlement detection, and freshwater availability.

Thanks to the enlightened free and open data policy of the European Commission and European Space Agency, we are pleased to announce the availability of Copernicus Sentinel-1 data through Earth Engine for visualization and analysis. Sentinel-1, a radar imaging satellite with the ability to see through clouds, is the first of at least 6 Copernicus satellites going up in the next 6 years.
This radar data offers a powerful complement to other optical and thermal data from satellites like Landsat, that are already available in the Earth Engine public data catalog. If you are a geoscientist interested in accessing and analyzing the newly available EC/ESA Sentinel-1 data, or anything else in our multi-petabyte data catalog, please sign up for Google Earth Engine.

We look forward to further engagements with the European research community and are excited to see what the world will do with the data from the European Union's Copernicus program satellites.