In addition to supporting the experimental Gradle plugin, Android Studio 2.2 enables you to build C/C++ components of Android projects using CMake and ndk-build. 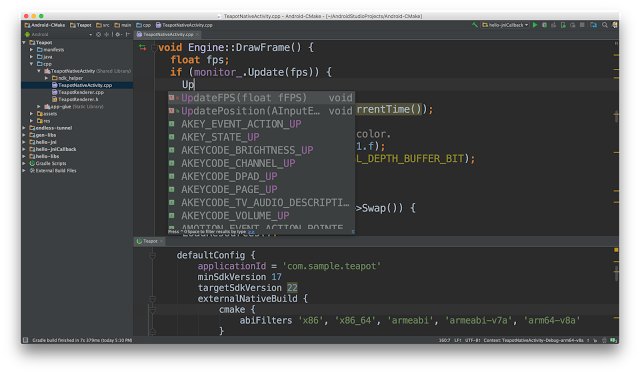 The Android Studio team plans to continue to support the experimental Gradle plugin. This will eventually replace the current Gradle plugin, providing additional tightly-integrated benefits to C/C++ developers such as smarter dependency management. So if you're interested in someday having the smartest possible interface between your IDE and your build system, you shouldn't ignore the experimental plugin.

CMake and ndk-build are useful alternatives to Gradle in several cases:

While we think that there are substantial advantages to having a single build system able to handle all parts of an Android application, stabilizing the experimental plugin is not an option for us because it relies on Gradle APIs that are still a work in progress. Until the Gradle APIs are stabilized, the experimental plugin will keep changing, particularly in its Domain Specific Language, and will be strictly tied to a very specific version of Gradle itself.

Note that the the old, undocumented ndkCompile integration is deprecated. If you are using it, you need to move away from it as we'll remove it completely in the near future. We recommend migrating to gradle+cmake via our migration guide.

Migrating from Eclipse to Android Studio

We no longer support the Eclipse ADT. To get started migrating, download and install Android Studio. For most projects, migration is as simple as importing your existing Eclipse ADT projects in Android Studio with the File → New→ Import Project menu option. For more details on the migration process, check out the migration guide.

We're dedicated to making Android Studio the best possible integrated development environment for building Android apps, so if there are missing features or other challenges preventing you from using Android Studio, we want to hear about it [please take our survey]. You can also file bugs or feature requests directly with the team, and let us know via our Twitter or Google+ accounts.

Android Studio is an open source project, available to all at no cost. Check out our Open Source project page if you're interested in contributing or learning more.