Here’s an example of what you’ll see in Cloud Console for a project that's capturing trace data:

You’ll observe the following in the mobile app: 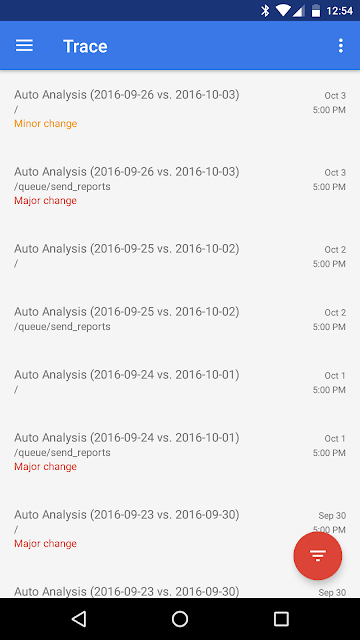 Latency reports are automatically generated for the endpoints with the highest traffic in each project; each of these reports compares each endpoint’s current latency profile to the prior week’s.

In the web-based console, selecting New Report allows you to create custom reports to observe the latency profile of a particular endpoint, or to compare the performance of an endpoint between different times and versions (see here for more details).

Some reports are flagged as having major or minor changes, which indicates that the latency distribution across percentiles is substantially different between the two versions or times being compared. These are often worth investigating, as they can represent changes in a service’s underlying performance characteristics.

The table at the bottom of the report shows that the application’s latency has increased in the 90th percentile and lower, while it has decreased in the higher percentile cases. This distinction is important: a simple comparison of the mean latencies between times A and B shows little change, but the report correctly identifies that the service is now considerably faster for the worst 10% of requests.

Here’s an example of a similar report in the mobile app, with a similar percentile comparison grid: 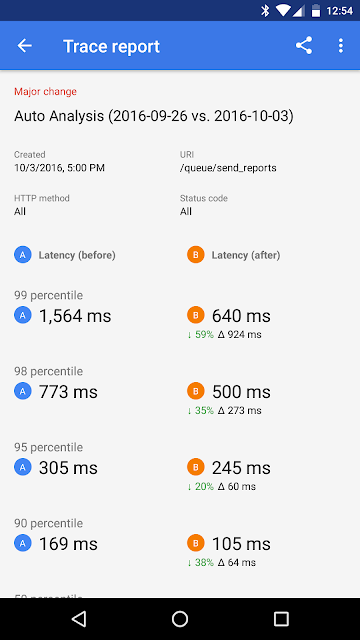 This feature will be available for the iOS Cloud Console app shortly.

For more information on how to create and understand latency reports, see this page. Let us know what you think about this feature, either by commenting here or through the send feedback button in Cloud Console.