To build awareness of the awesome innovation and art that indie game developers are bringing to users on Google Play, we have invested heavily over the past year in programs like Indie Corner, as well as events like the Google Play Indie Games Festivals in North America and Korea.

As part of that sustained effort, we also want to celebrate the passion and innovation of indie game developers with the introduction of the first-ever Google Play Indie Games Contest in Europe. The contest will recognize the best indie talent in several countries and offer prizes that will help you get your game noticed by industry experts and gamers worldwide.

Prizes for the finalists and winners:

If you're based in Czech Republic, Denmark, Finland, France (coming soon), Germany, Iceland, Israel, Netherlands, Norway, Poland (coming soon), Romania, Spain, Sweden, Turkey, or UK (excl. Northern Ireland), have 15 or less full time employees, and published a new game on Google Play after 1 January 2016, you may now be eligible to enter the contest. If you're planning on publishing a new game soon, you can also enter by submitting a private beta. Check out all the details in the terms and conditions. Submissions close on 31 December 2016. 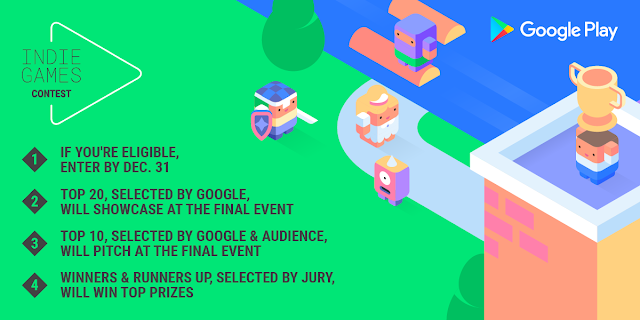 Up to 20 finalists will get to showcase their games at an open event at the Saatchi Gallery in London on the 16th February 2017. At the event, the top 10 will be selected by the event attendees and the Google Play team. The top 10 will then get the opportunity to pitch to a jury of industry experts, from which the final winner and runners up will be selected.

Even if someone is NOT entering the contest:

Even if you're not eligible to enter the contest, you can still register to attend the final showcase event in London on 16 February 2017, check out some great indie games, and have fun with various industry experts and indie developers. We will also be hosting a workshop for all indie games developers from across EMEA in the new Google office in Kings Cross the next day, so this will be a packed week.

Enter the Indie Games Contest now and visit the contest site to find out more about the contest, the event, and the workshop.