That’s a wrap! More than 15,000 passionate fans joined us on Saturday, May 2, as YouTube FanFest made its North American debut. Toronto welcomed a group of the biggest Canadian and international YouTube creators for a live showcase that wowed the crowd with music, comedy and interactive performances. If you missed the show or want to watch it again, now you catch the full show on the FanFest YouTube channel!
The free, public show featured YouTube superstars Jenna Marbles, Bethany Mota, Michael Stevens of Vsauce and Toronto’s own IISuperwomanII. The performances ranged from the soulful music of American star David Choi to the bhangra drumming of Jus Reign to a live science experiment between Michael Stevens and Jenna Marbles that saw Marbles blow a fireball into the air above the crowd.
Co-hosted by charismatic TV personality Jessi Cruickshank and Harley Morenstein of Epic Meal Time, the event closed with the world premiere performance of Lilly Singh’s online smash hit new song “IVIVI”, an ode to Toronto, that drew deafening cheers from the crowd.
Lilly Singh, ||Superwoman|| performs the world premiere of "IVIVI"
Other highlights included a fan Q&A with Bethany Mota, as well as a unique performance from Kurt Hugo Scheider, Macy Kate, Madilyn Bailey and Kina Grannis. The foursome of musicians collaborated on a song that was set to a complicated rhythm of handclaps, which they performed while blindfolded. Edmonton-born a capella singer Mike Tompkins had the fans on their feet for a high energy set, and local girl LaurDIY brought fans on the stage for a live DIY fashion challenge that saw fans create a shirt for host Jessi Cruickshank.

Fandemonium at the first North American YouTube FanFest in Toronto
This was a record crowd for YouTube FanFest - more than triple the attendance for previous events in Asia, India and Australia - which shows the incredible passion of Canadian YouTube fans. FanFest was also a hot topic on social media - the #YTFFTO hashtag trended across Toronto as fans took to social media to share the experience.
Thank you too all the extraordinary YouTube Creators and fans that came out for red carpet and show. Canada is hotbed of YouTube talent and fandom, and we are thrilled we were able to bring this to Canadian fans as a North American first!
Posted by Jenn Kaiser, YouTube Communications

Editor Note: Today’s guest blog post is from LaToya Forever. With a combined +1,200,000 subscribers, this Canadian YouTuber is best known for her comedic videos and daily vlogs.
Get ready Canada, this Saturday we kick off YouTube FanFest live in Toronto! Some of the biggest global YouTube stars will be getting up close and personal with thousands of fans at Yonge-Dundas Square and I’m thrilled to announce that I’m going to be the Official YouTube FanFest Correspondent. Follow me as I chat with my fellow performers and give you a sneak peek into all the behind-the-scenes action.
The YT Fan Fest is all about interacting with awesome people like yourself so let me know what questions should I ask everyone on the red carpet? Share your questions with me in social with #AskLaToya and I might pose your question to the YouTube performers! 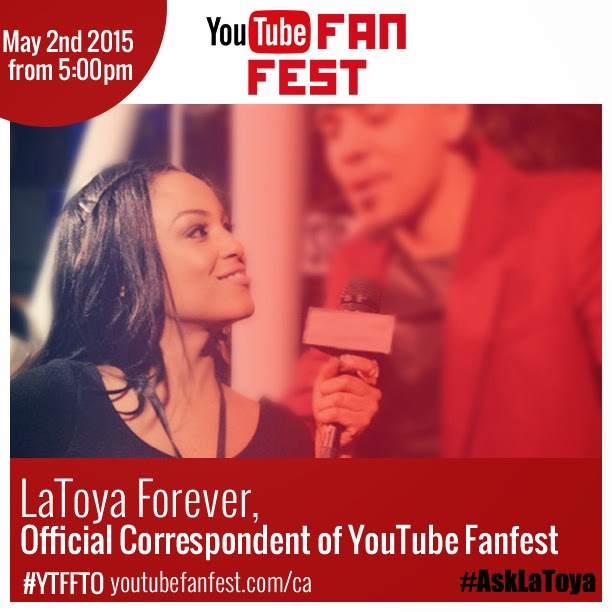 Come on down and join us in person, red carpet arrivals start at 5:00 p.m. on the north side of the Dundas Square. Come and see your favourites, like Bethany Mota, Superwoman, David Choi, Mike Tompkins and Jenna Marbles - they’ll be signing autographs, taking selfies and blowing kisses! And don’t forget to share your pics with #YTFFTO and you might catch them live on the big screen.
I can’t wait for the big show which starts at 8:00 p.m. and it’s going to be a mashup of comedy, music, interactive performances, collaborations… everything you love about YouTube, live on stage. You won’t want to miss it! And if you can’t make it in person, check out the YouTube FanFest YouTube Channel to catch the entire show afterwards.
See ya there crazies!