Censorship and surveillance are challenges that many journalists around the world face on a daily basis. Some of them use a virtual private network (VPN) to provide safer access to the open internet, but not all VPNs are equally reliable and trustworthy, and even fewer are open source.

That’s why Jigsaw created Outline, a new open source, independently audited platform that lets any organization easily create and operate their own VPN.

Outline’s most striking feature is arguably how easy it is to use. An organization starts by downloading the Outline Manager app, which lets them sign in to DigitalOcean, where they can host their own VPN, and set it up with just a few clicks. They can also easily use other cloud providers, provided they have shell access to run the installation script. Once an Outline server is set up, the server administrator can create access credentials and share with their network of contacts, who can then use the Outline clients to connect to it. 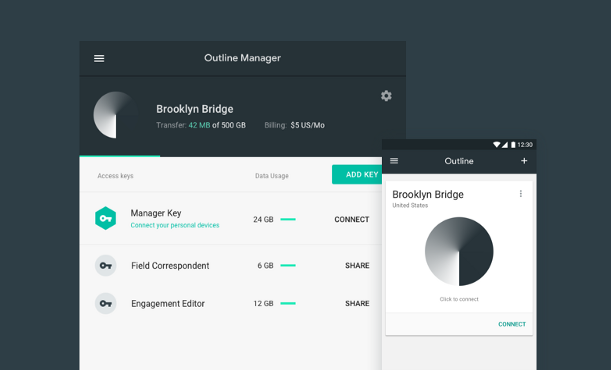 A core element to any VPN’s security is the protocol that the server and clients use to communicate. When we looked at the existing protocols, we realized that many of them were easily identifiable by network adversaries looking to spot and block VPN traffic. To make Outline more resilient against this threat, we chose Shadowsocks, a secure, handshake-less, and open source protocol that is known for its strength and performance, and enjoys the support of many developers worldwide. Shadowsocks is a combination of a simplified SOCKS5-like routing protocol, running on top of an encrypted channel. We chose the AEAD_CHACHA20_POLY1305 cipher, which is an IETF standard and provides the security and performance users need.

Another important component to security is running up-to-date software. We package the server code as a Docker image, enabling us to run on multiple platforms, and allowing for automatic updates using Watchtower. On DigitalOcean installations, we also enable automatic security updates on the host machine.

If security is one of the most critical parts of creating a better VPN, usability is the other. We wanted Outline to offer a consistent, simple user experience across platforms, and for it to be easy for developers around the world to contribute to it. With that in mind, we use the cross-platform development framework Apache Cordova for Android, iOS, macOS and ChromeOS, and Electron for Windows. The application logic is a web application written in TypeScript, while the networking code had to be written in native code for each platform. This setup allows us to reutilize most of code, and create consistent user experiences across diverse platforms.

In order to encourage a robust developer community we wanted to strike a balance between simplicity, reproducibility, and automation of future contributions. To that end, we use Travis for continuous builds and to generate the binaries that are ultimately uploaded to the app stores. Thanks to its cross-platform support, any team member can produce a macOS or Windows binary with a single click. We also use Docker to package the build tools for client platforms, and thanks to Electron, developers familiar with the server's Node.js code base can also contribute to the Outline Manager application.

You can find our code in the Outline GitHub repositories and more information on the Outline website. We hope that more developers join the project to build technology that helps people connect to the open web and stay more safe online.