Street View started out as Larry Page’s far-fetched idea to create a 360-degree map of the world. Today, 10 years after the first imagery was published in Street View, Canadians can scale mountains, take a tour of the Canadian Memorial at Vimy Ridge, scout out the best Street Art in Montreal, and walk through Canadian museums. Over the last decade, a lot has changed—the technology we use, the appearance of the planet—but the goal of Google Maps has remained the same: to help you navigate and discover new corners of the world. Now raise your glass (or smartphone), and cheers to Street View’s 10th birthday!

[Whistler Mountain in British Columbia]
Let’s hop inside our time machine and see where it all began. Larry kicked off the first prototype in 2004 with a team of Googlers who were passionate about his idea to create a 360-degree view of the world. They tossed cameras on a van, added some lasers (okay maybe it was a bit more complicated than that), and the first Street View car was born. In 2006, Street View officially hit the roads in a few cities across the U.S. and the first imagery was published in May 2007. In Canada, Street View cars came up to Montreal through Vermont in September 2007 with the first image being of Highway 55. Ten years later, we’ve published imagery on every continent, in 83 countries, and traveled about 10 million miles with the Street View car. Talk about a roadtrip.

[First image of Highway 55 - Vermont border crossing on the way to Montreal - the first image in Street View in Canada]
While our cars explored streets around the world, we were still missing out on some of the most beautiful places on Earth: the world that exists beyond the roads. So we developed custom rigs, like the Street View Trekker, to go where cars couldn’t go. The Trekker is designed to be worn and walked through narrow alleyways or trails, gathering images as it goes. It’s traveled to breathtaking natural wonders and world heritage sites—Grand Canyon, the Taj Mahal, Angkor Wat, the Galapagos Islands and even the historic pedestrian paths in Venice. And it's been used by conservation organizations to observe wildlife, like elephants, chimps, polar bears, and frogs in the Amazon, in their natural habitat. Over the years we've put Street View cameras on a snowmobile to bring you closer to the Arctic Eiders, the back of a camel to roam the Arabian desert, and a trolley to give you a better view of renowned works of art.

[Street View cameras on a snowmobile to bring you closer to the Arctic Eiders]
To build our map of the world faster, in 2013 we enlisted the help of partners through the Trekker Loan Program. We gave volunteers Street View cameras, which they used to collect 360-degree imagery of the local places they know best. Then the Street View App came along in 2015, so that anyone could publish photo spheres (360-degree panoramas) of their favorite places from around the world—or around the block—to Google Maps in an instant. We expanded on this last month, when we announced more than 20 new Street View-compatible 360 cameras, to help you document your adventures with high quality imagery. Now anyone—from tourism organizations to local neighborhood enthusiast—can contribute panoramic imagery to Street View.
The world is better explored than explained. Street View gives you a taste of the places you’ll see in person one day, helps you remember the places you've been, and enables you to explore the places you might never get to. So pick up your phone and take a peek. Many wonders await.
Authored By: Arjun Raman, Technical Program Management Director, Street View

So here's a challenge: How do you engage a new generation with an old story about a military battle thousands of kilometers away? That's what we had to consider when we decided to re-tell the story of Vimy Ridge.
Vimy is one of those names that Canadians mention when they talk about their country's military past – names like The Plains of Abraham, Ypres, Dieppe, Normandy and many, many others. But what do they really know about what happened a century ago now on that towering ridge in northern France? Did we win, did we lose, did it really make a difference? And perhaps most important of all, why do some historians say it was in that bloody, horrific battle that Canada forged its soul and became a nation? All good questions, but how in today's world of short attention spans and handheld technology can we find new and captivating ways to answer them.
That's why a seemingly odd pairing - a new age tech giant: Google Canada, teamed up with the supposedly staid old Mother Corp (and it's aging anchor!) and headed off to the battlefield just last month. And within hours of arrival there I found myself with a Google "Trekker" strapped to my back, walking through the restored trenches of Vimy Ridge.

Trekker in the Trenches
The "Trekker" is the same piece of technology that takes those Street View pictures of downtowns across Canada It isn’t that heavy – it weighs about twenty kilograms – but it does make you a bit top heavy and you have to be careful not to topple over! But the benefits for the viewer are terrific – the "Trekker" puts you right there, walking through history along the same paths our grandfathers and great grandfathers did exactly one hundred years ago during the Easter weekend of 1917. That's when the 100,000 soldiers of Canada's four divisions, for the first time together, launched an attack on what was seen as the most strategic ridge the Germans held in France.
The Tunnels
Beneath the trenches, the tunnels that shuttled the troops to the front lines. Today they too are restored and safe – a far cry from the muddy, rat infested and highly dangerous subways that our forefathers used to get to the fight. And here again, we bring you right there. This time using The Odyssey - 16 interconnected GOPRO cameras - created a 360 degree video of your surroundings, to give you the ultimate feel. When watching through virtual reality goggles you can point the picture where you want to go, see what you want to see. The tunnels were an engineering feat - able to keep the soldiers and the officers safe, but right at the frontlines of the battle as it raged above.

Canada won the battle, and at home, that became a source of considerable national pride. And for the soldiers who did the fighting, a source of considerable and justified boasting. They had done what neither the French nor the British had been able to do over months of intense fighting. But Canada paid a very heavy price. Over four days of sometimes hand to hand combat, we lost nearly four thousand soldiers, and more than seven thousand wounded. In the Canadian Vimy cemetery thousands lie side by side – they're young, sometimes very young, ages paying testament to the generation we lost.
Monument at Vimy
The Vimy monument sits high atop the ridge that so much Canadian blood was lost to win. It is tribute to all those who died in the Great War but whose bodies were never found --- all their names, more than 11 thousand of them – are carved into the monument's walls.

Every name a compelling story of a Canadian who had travelled across the oceans to fight for "King and Country". They were fathers, sons, brothers, cousins, farmers, teachers, lawyers, labourers, hockey players, artists, preachers …. and there were kids, school students who lied about their age to do what they thought was right.

In the classroom
In the past few days the results of the Google-YouTube-CBC partnership have started to hit some select Canadian schools. Last week a grade eight class in Harriston, Ontario watched in amazement. It can be disconcerting – you really DO feel like you're there, almost reaching out to touch the trenches, the tunnels, the carved names.

And really, that's what we were hoping would happen.

Letting that new generation to virtually reach back a century and touch a moment that helped make all us, and our country, who we are.

Editor’s note: Today’s blog is authored by Michael White who works in the Brand Experience Branch at Parks Canada and leads the Agency’s collaboration with Google Maps
Outdoor adventures are the heart and soul of the Canadian summer and there’s no better way to get outside and experience the wonder of our country than with a trip to one of our national parks, national marine conservation areas or national historic sites.
Once again we’ve teamed up with Google to capture more 360 degree imagery from these amazing Parks Canada places. New Street View imagery of  dozens of National Parks and Historic Sites  launches today on Google Street View just in time for Parks Day (July 16th), the annual celebration of Canada’s amazing natural and historic places. 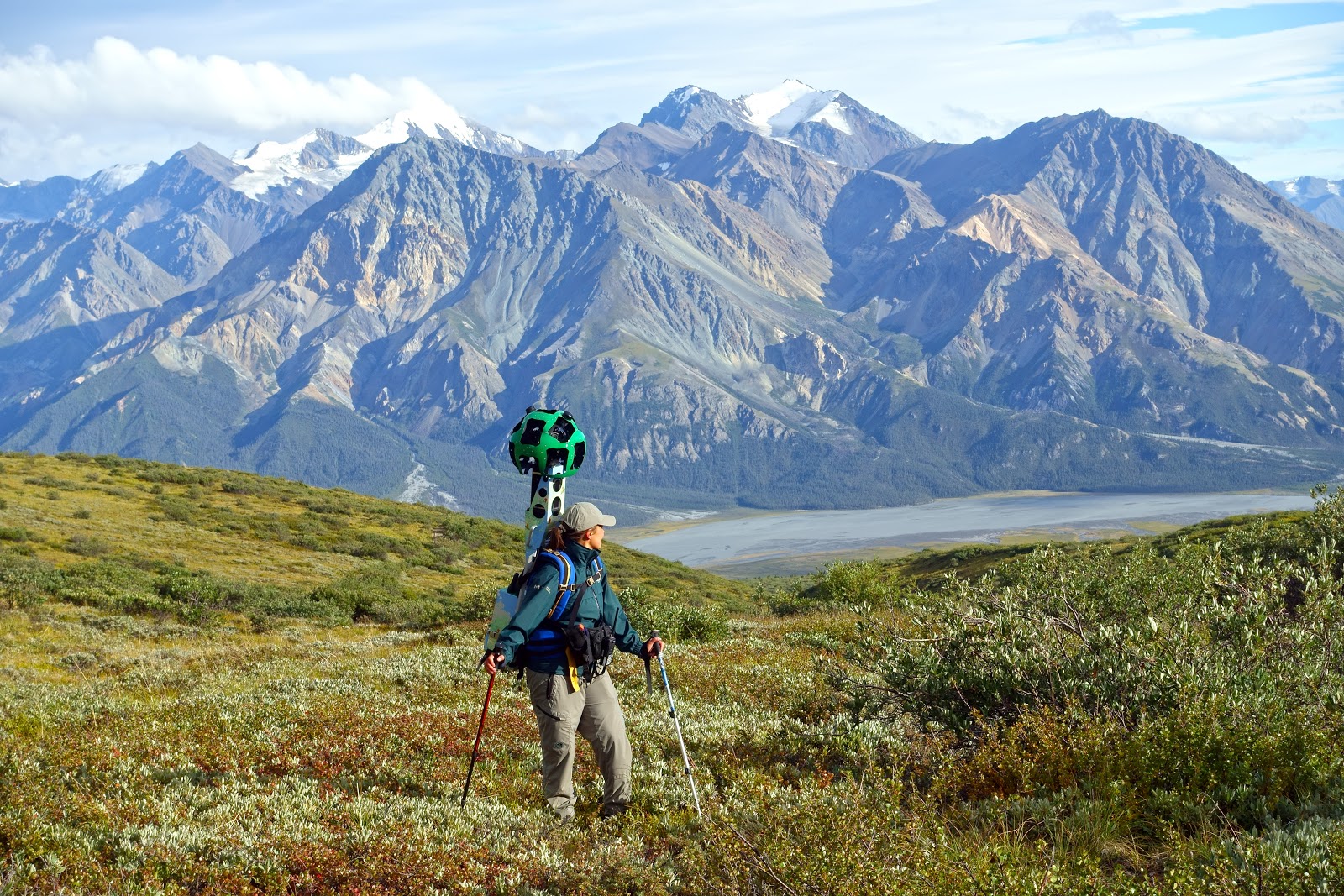 Parks Canada employee collecting Street View imagery from the Bullion Plateau in Kluane National Park and Reserve
Whether you’re planning to spend a day hiking and swimming, planning a week of camping, canoeing and portaging, or travelling back through time in one of Canada’s national historic sites, our parks and historic sites from coast to coast to coast will remind you why Canadian summers are the best summers.
Many Canadians enjoy camping in the great outdoors while visiting one of Canada’s national parks, and when it comes to camping, Canadians have got a lot of questions… 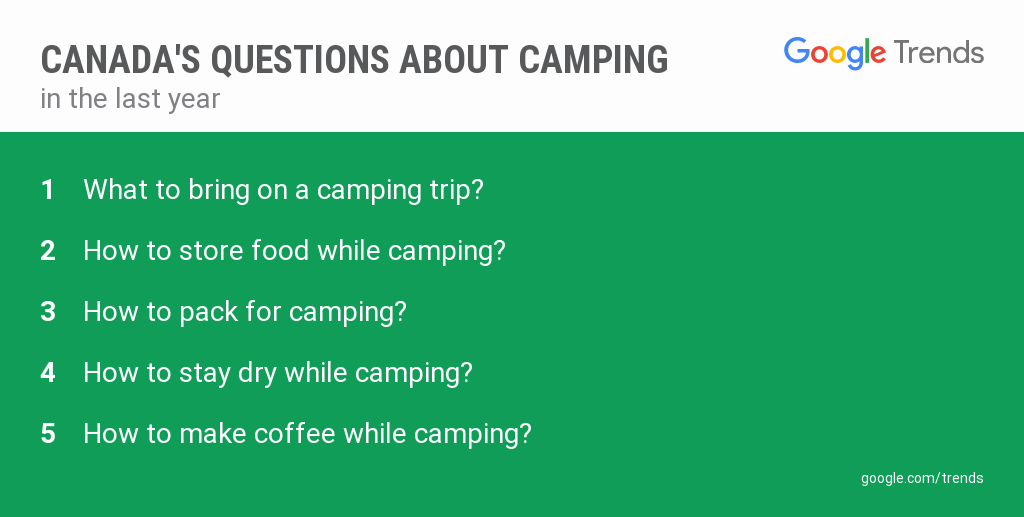