From farmers to florists, clockmakers to cheesemakers, accountants to antique shops, the web is powering the growth of small businesses across Europe. Entrepreneurs today find their customers online and export their products and services around the globe thanks to the web. Businesses that use the web intensively grow up to four times faster than those that don’t, creating new jobs and opportunities across all sectors.

On February 26th, together with Digital Europe and the Lisbon Council, we’re hosting an event in Brussels to celebrate the success of small, web-savvy European businesses, and we hope you’ll join us. 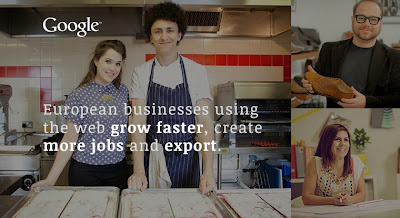 At SMEs in the Digital Single Market: Creating Growth in Europe, you can:


A limited number of places are still available, to register, please get in touch via [email protected]

For the past five years, an economic meltdown has plunged Greece into crisis. Amid the the rubble, the country’s economic motor more than ever has become tourism. It now accounts 17% of GDP, and powered by the Internet, is demonstrating, a high potential for growth. Our "Grow Greek Tourism Online” program, launched, in partnership with the Minister of Tourism, the National Tourism Board and the Federation of Tourism Enterprises, allows B&Bs, neighborhood restaurants and even specialty ice cream shops and bars to use the Internet and reach new customers.

The program provides tourism entrepreneurs with digital skills and tools to grow their business during and beyond Greece’s short summer tourism season. About 70 percent of the country's tourism arrivals take place between June and September. Although Greece's islands and beaches are delightful in spring and autumn, only about 17 percent of tourists come in May, October and November. “Now, more than ever, it is possible to gradually extend the tourist season. Through web partnerships and the use of innovative tools, we make a further step in this direction," said Olga Kefalogianni, the Minister of Tourism.

The opportunity is significant: According to recent research by Oxford Economics, an increase in the online activities of the Greek tourism industry can grow Greece’s GDP by 3% and create 100K new jobs.

As a first step, we kicked off the program in Crete (which accounts for 15 percent of the country’s tourism business), hosting events for small and medium sized businesses in the island’s two largest cities, Chania and Heraklion. More than 600 companies participated. Greece’s National Tourism Board EOT launched a campaign for Crete as an autumn tourism destination on their +Page with over 1.4 million followers. “Everyone involved in tourism must take advantage of the web." said EOT’s General Secretary, Panos Livadas. The President of the Federation of Tourism Enterprises Andreas Andreadis summed up the project best: "That’s a strong bright light which should help power Greece out of its long economic gloom.”