This article is written by Hyunkil Kim who participated in the Machine Learning Bootcamp which is a machine learning training program conducted in Korea to nurture next-generation ML engineers and help them to find jobs.

As a developer, I had developed a certain level of curiosity about machine learning. I had also heard that many former developers were switching their specialization over to machine learning. Thus, I signed up for the <Google Machine Learning Bootcamp>, thinking it would be a good chance to get my feet wet.

I was a bit nervous and excited at the same time after getting the acceptance notification. Wondering if I should go over my Python skills one more time in preparation, I installed the newest version of TensorFlow on my machine. I also skimmed through documents on the basics of machine learning. Those were all unnecessary. To put it bluntly, I had to relearn everything from scratch over the course of the bootcamp. It was quite challenging to be introduced to new concepts I wasn't familiar with, such as functional API and the concept of functional programming in general, various visualization libraries, and data processing frameworks and services that were new to me. I worked very hard with the mindset of starting fresh.

There were three main objectives for the participants: completing the Deep Learning Specialization on Coursera which is based on TensorFlow, acquiring ML certifications(TensorFlow certificate or Google Cloud ML(or Data Science) Engineer certification), and participating in Kaggle competitions. Google Developers team provided the course fee for Coursera and the certification fee and offered many benefits to those who completed the course. You could really make it worth your while as long as you took the initiative and applied your passion.

The Coursera class is based on TensorFlow 2.x and requires watching a set amount of instructor Andrew Ng's lectures on AI every week with screenshots and proof. It was pretty tough at first as the lectures were not in Korean. However, because the class was so famous, I was able to find posts on the internet that broke down the lectures and made them easier to understand. The class also provided reference links, so you could study more on your own once you got used to the class.

While this is not really related to the Coursera class, I also participated in online coding meetups by the bootcamp participants in-between classes as in the picture below, and it was a memorable experience. These are basically sessions held in coffee shops or study rooms where people got together and worked individually on their own coding projects in normal times. Because of the pandemic, we could not meet in person obviously and used Google Meet or Gather town and left our cameras on as we coded. It felt like I was studying with other people, and I liked the solidarity of relating to others. 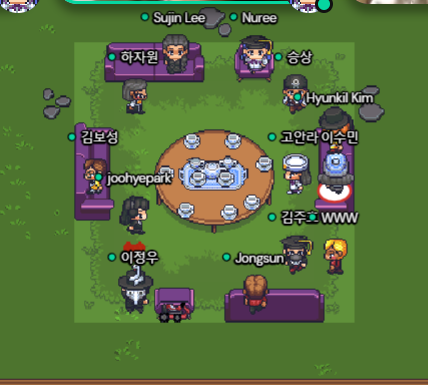 You were required to acquire at least one certification during the bootcamp. I chose to work on the GCP ML Engineer certification. As I used Google Cloud, I had wondered how ML services could be used on cloud. Coursera happened to have a specialization program for the GCP ML certification, so I took it, too. However, in the end, Google's website offering GCP AI operations and use cases helped me more with the certification than the course on Coursera. 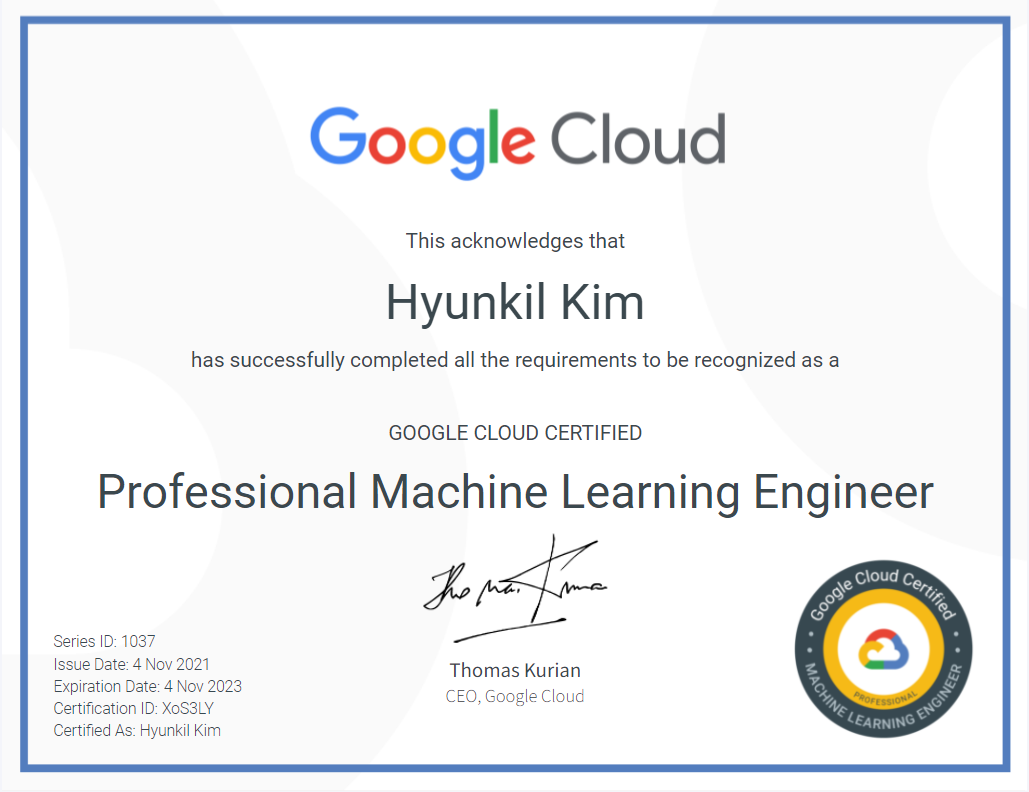 I didn't get to spend as much time on Kaggle. I didn't see any current projects that interested me, so I tried the TPS to review what I had learned so far. TPS stands for Tabular Playground Series, which is a beginner-to-intermediate level competition for new-ish Kagglers that are just getting the hang of it. You're required to predict the value of the target from the provided tabular data. It is slightly more difficult than Titanic Survival Predictions, which is a beginner competition. I chose this competition because I figured it would be a good practice of things I had learned so far, like data analysis, feature engineering, and hyperparameter tuning. 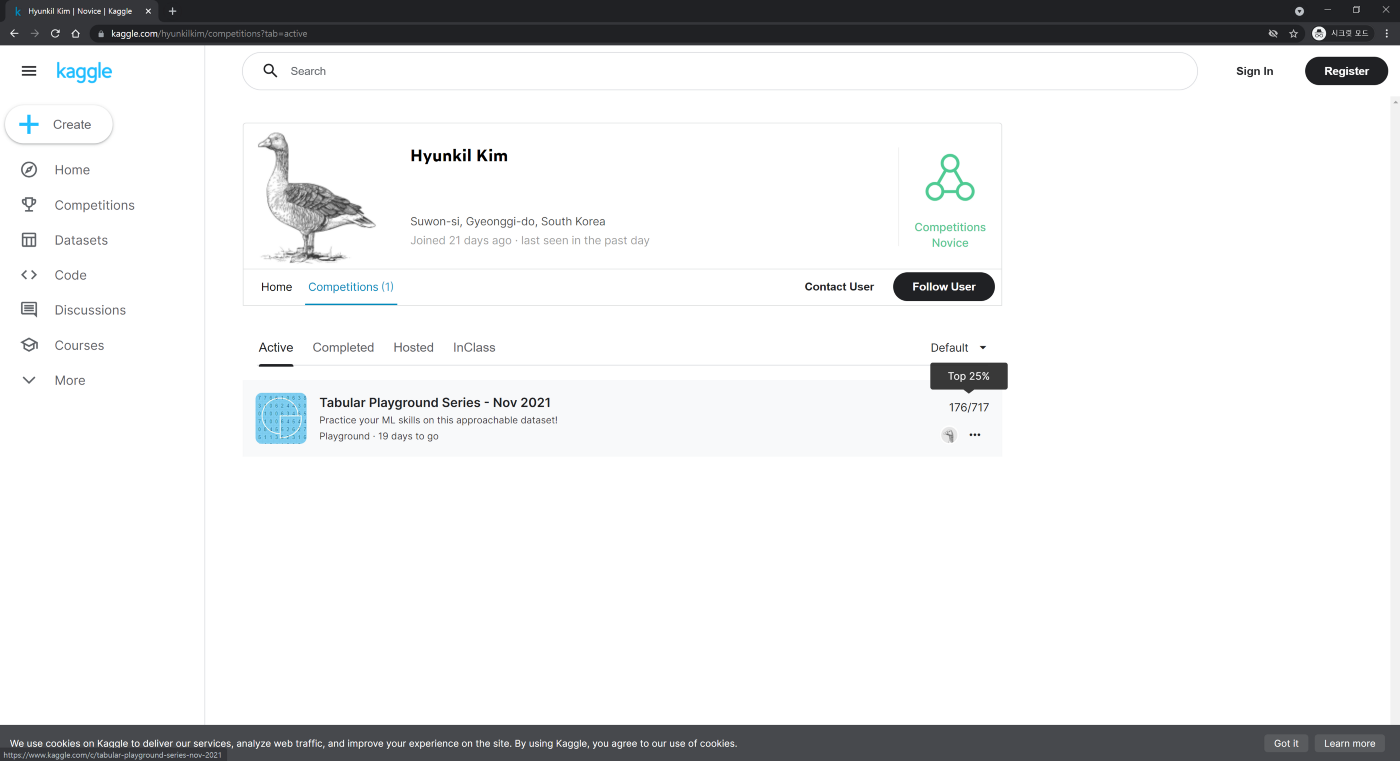 This was the part where I personally felt like I could have done better. I had many ideas for improving the model or enhancing the performance, but it took way more time to apply and experiment with them than I had expected. If I had known that model learning would take this much time, I would have started working on Coursera, the certification, and the Kaggle competition all at once from the beginning. Maybe I was too nervous about entering a Kaggle competition and put it off until the end. I should have just tried without getting so nervous. I hesitated too long and ended up regretting it a little too late.

The bootcamp also included many other activities, including a weekly Tech Talk on specific themes and recruiting sessions of potential employers. Companies looking for ML talents were invited and had a chance to introduce themselves, explain the available positions, and take questions about joining their workforce. Some companies sent their current Machine Learning engineers to explain how they solved business problems with which models or what kind of data. Some companies focused more on describing the type of people they were looking for in detail. I didn't know at the time, but I heard that some of the speakers were big names in the industry. Personally, I found these talks very helpful in terms of both finding employment and familiarizing myself with the trends in the industry. The sessions were very inspiring as new ideas kept flowing as I heard about applications of technologies I only knew in theory or thought about what kind of investments in AI would be promising.

Besides the Tech Talks, there were also more relaxed sessions for things like career consultation and resume/CV reviews. There were even sessions by the Googlers, where they personally answered participants' questions and offered some advice. As I attended various sessions, I noticed that the bootcamp crew and many Tech Talk speakers from hiring companies offered authentic and valuable advice and were very eager to help out the bootcamp participants. Nobody talked about the cold reality of the world out there. Knowing how rare it is to find mentors that offer genuinely constructive feedback and guidance, I personally was very touched and grateful about that.

The Google Machine Learning Bootcamp captured the essence of what it would be like to work for Google. I felt like they expected you to take your own initiative to do what you wanted. They showed that they were willing and able to help you grow as much as possible as long as you did your best. For example, one of the world's most famous programmers Jeff Dean was at the kickoff session, and there was even an AMA session with Laurence Moroney, who had developed the training course for TensorFlow. They also allowed maximum freedom about finding teammates for the Kaggle competitions so that you didn't have to worry about having to carry your team. Things covered in the Tech Talks or recruitment sessions were not included in assignments. They let the participants do their thing freely while promising the best support possible in the industry if needed. I could see how some people would find it too lax that Google lets you study on your own at your own pace.

I think this was a rare chance to meet people from various backgrounds with the common goal of becoming machine learning engineers or developers. It was a unique experience where I got to talk and study with good people and even do something strange like the online coding meetup. There were also times when I was vainly taking pride in what little knowledge I had, but I ended up putting a lot of work into the bootcamp, wanting to make the most of it and to come ahead of others.

In the end, the take-home message is to "try anything."

Personally, I was very happy with the experience. I got to be a little more comfortable with machine learning. As a result, I'm able to pay more attention to details related to machine learning at my new job. The challenge of facing something new is a constant of a developer's life. Still, participating in this bootcamp felt especially meaningful to me, and I enjoyed it thoroughly.

While the bootcamp is over, I heard that some participants are still continuing with their study groups or projects. Wanting to study as a group myself, I also had asked around and volunteered to join a study group, but I ended up studying alone because none of the groups covered the area I was interested in. Even so, many people sharing useful information on Slack helped me as I studied alone, and they are still helping me even after the bootcamp.

At any rate, I keep coming up with various ideas that I want to try in my current job or as a personal project. It feels like I found a new toy that I can have fun with for a while without getting tired of it. I think I'll start slowly with a small toy project.