Earlier this year, we launched Android Wear 2.0 which featured the first "on-device" machine learning technology for smart messaging. This enabled cloud-based technologies like Smart Reply, previously available in Gmail, Inbox and Allo, to be used directly within any application for the first time, including third-party messaging apps, without ever having to connect to the cloud. So you can respond to incoming chat messages on the go, directly from your smartwatch.

Today, we announce TensorFlow Lite, TensorFlow’s lightweight solution for mobile and embedded devices. This framework is optimized for low-latency inference of machine learning models, with a focus on small memory footprint and fast performance. As part of the library, we have also released an on-device conversational model and a demo app that provides an example of a natural language application powered by TensorFlow Lite, in order to make it easier for developers and researchers to build new machine intelligence features powered by on-device inference. This model generates reply suggestions to input conversational chat messages, with efficient inference that can be easily plugged in to your chat application to power on-device conversational intelligence.

The on-device conversational model we have released uses a new ML architecture for training compact neural networks (as well as other machine learning models) based on a joint optimization framework, originally presented in ProjectionNet: Learning Efficient On-Device Deep Networks Using Neural Projections. This architecture can run efficiently on mobile devices with limited computing power and memory, by using efficient “projection” operations that transform any input to a compact bit vector representation — similar inputs are projected to nearby vectors that are dense or sparse depending on type of projection. For example, the messages “hey, how's it going?” and “How's it going buddy?”, might be projected to the same vector representation.

Using this idea, the conversational model combines these efficient operations at low computation and memory footprint. We trained this on-device model end-to-end using an ML framework that jointly trains two types of models — a compact projection model (as described above) combined with a trainer model. The two models are trained in a joint fashion, where the projection model learns from the trainer model — the trainer is characteristic of an expert and modeled using larger and more complex ML architectures, whereas the projection model resembles a student that learns from the expert. During training, we can also stack other techniques such as quantization or distillation to achieve further compression or selectively optimize certain portions of the objective function. Once trained, the smaller projection model is able to be used directly for inference on device. 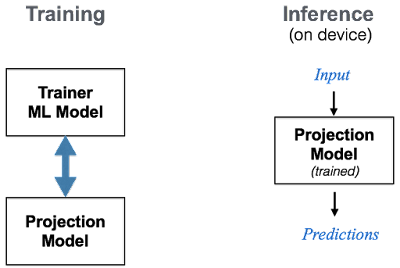 For inference, the trained projection model is compiled into a set of TensorFlow Lite operations that have been optimized for fast execution on mobile platforms and executed directly on device. The TensorFlow Lite inference graph for the on-device conversational model is shown here.
The open-source conversational model released today (along with code) was trained end-to-end using the joint ML architecture described above. Today’s release also includes a demo app, so you can easily download and try out one-touch smart replies on your mobile device. The architecture enables easy configuration for model size and prediction quality based on application needs. You can find a list of sample messages where this model does well here. The system can also fall back to suggesting replies from a fixed set that was learned and compiled from popular response intents observed in chat conversations. The underlying model is different from the ones Google uses for Smart Reply responses in its apps1.

Beyond Conversational Models
Interestingly, the ML architecture described above permits flexible choices for the underlying model. We also designed the architecture to be compatible with different machine learning approaches — for example, when used with TensorFlow deep learning, we learn a lightweight neural network (ProjectionNet) for the underlying model, whereas a different architecture (ProjectionGraph) represents the model using a graph framework instead of a neural network.

The joint framework can also be used to train lightweight on-device models for other tasks using different ML modeling architectures. As an example, we derived a ProjectionNet architecture that uses a complex feed-forward or recurrent architecture (like LSTM) for the trainer model coupled with a simple projection architecture comprised of dynamic projection operations and a few, narrow fully-connected layers. The whole architecture is trained end-to-end using backpropagation in TensorFlow and once trained, the compact ProjectionNet is directly used for inference. Using this method, we have successfully trained tiny ProjectionNet models that achieve significant reduction in model sizes (up to several orders of magnitude reduction) and high performance with respect to accuracy on multiple visual and language classification tasks (a few examples here). Similarly, we trained other lightweight models using our graph learning framework, even in semi-supervised settings.
We will continue to improve and release updated TensorFlow Lite models in open-source. We think that the released model (as well as future models) learned using these ML architectures may be reused for many natural language and computer vision applications or plugged into existing apps for enabling machine intelligence. We hope that the machine learning and natural language processing communities will be able to build on these to address new problems and use-cases we have not yet conceived.


1 The released on-device model was trained to optimize for small size and low latency applications on mobile phones and wearables. Smart Reply predictions in Google apps, however are generated using larger, more complex models. In production systems, we also use multiple classifiers that are trained to detect inappropriate content and apply further filtering and tuning to optimize user experience and quality levels. We recommend that developers using the open-source TensorFlow Lite version also follow such practices for their end applications.↩