Posted by Dr. Stacey Gabriel, Director of the Genomics Platform at the Broad Institute of MIT and Harvard

Today we hear from Broad Institute of MIT and Harvard about how their researchers and software engineers are collaborating closely with the Google Genomics team on large-scale genomic data analysis. They’ve already reduced the time and cost for whole genome processing by several fold, helping researchers think even bigger. Broad’s open source tools, developed in close collaboration with Google Genomics, will also be made available to the wider research community.
– Jonathan Bingham, Product Manager, Google Genomics

As one of the largest genome sequencing centers in the world, the Broad Institute of MIT and Harvard generates a lot of data. Our DNA sequencers produce more than 20 Terabytes (TB) of genomic data per day, and they run 365 days a year. Moreover, our rate of data generation is not only growing, but accelerating – our output increased more than two-fold last year, and nearly two-fold the previous year. We are not alone in facing this embarrassment of riches; across the whole genomics community, the rate of data production is doubling about every eight months with no end in sight.

Here at Broad, our team of software engineers and methods developers have spent the last year working to re-architect our production sequencing environment for the cloud. This has been no small feat, especially as we had to build the plane while we flew it! It required an entirely new system for developing and deploying pipelines (which we call Cromwell), as well as a new framework for wet lab quality control that uncouples data generation from data processing.
Last summer Broad and Google announced a collaboration to develop a safe, secure and scalable cloud computing infrastructure capable of storing and processing enormous datasets. We also set out to build cloud-supported tools to analyze such data and unravel long-standing mysteries about human health. Our engineers collaborate closely; we teach them about genomic data science and genomic data engineering, and they teach us about cloud computing and distributed systems. To us, this is a wonderful model for how a basic research institute can productively collaborate with industry to advance science and medicine. Both groups move faster and go further by working together.

As of today, the largest and most important of our production pipelines, the Whole Genome Sequencing Pipeline, has been completely ported to the Google Cloud Platform (GCP). We are now beginning to run production jobs on GCP and will be switching over entirely this month. This switch has proved to be a very cost-effective decision. While the conventional wisdom is that public clouds can be more expensive, our experience is that cloud is dramatically cheaper. Consider the curve below that my colleague Kristian Cibulskis recently showed at GCP NEXT: 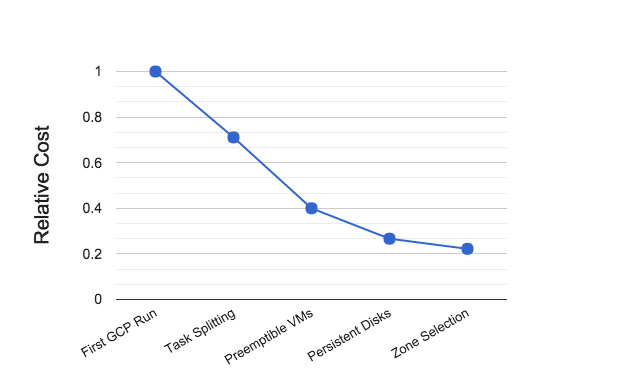 Out of the box, the cost of running the Genome Analysis Toolkit (GATK) best practices pipeline on a 30X-coverage whole genome was roughly the same as the cost of our on-premise infrastructure. Over a period of a few months, however, we developed techniques that allowed us to really reduce costs: We learned how to parallelize the computationally intensive steps like aligning DNA sequences against a reference genome. We also optimized for GCP’s infrastructure to lower costs by using features such as Preemptible VMs. After doing these optimizations, our production whole genome pipeline was about 20% the cost of where we were when we started, saving our researchers millions of dollars, all while reducing processing turnaround time eight-fold.

There is a similar story to be told on storage of the input and output data. Google Cloud Storage Nearline is a medium for storing DNA sequence alignments and raw data. Like most people in genomics, we access genetic variants data every day, but raw DNA sequences only a few times per year, such as when there is a new algorithm that requires raw data or a new assembly of the human genome. Nearline’s price/performance tradeoff is well-suited to data that’s infrequently accessed. By using Nearline, along with some compression tricks, we were able to reduce our storage costs by greater than 50%.

Altogether, we estimate that, by using GCP services for both compute and storage, we will be able to lower the total cost of ownership for storing and processing genomic data significantly relative to our on premise costs. Looking forward, we also see advantages for data sharing, particularly for large multi-group genome projects. An environment where the data can be securely stored and analyzed will solve problems of multiple groups copying and paying for transmission and storage of the same data.

Porting the GATK whole genome pipeline to the cloud is just the starting point. During the coming year, we plan to migrate the bulk of our production pipelines to the cloud, including tools for arrays, exomes, cancer genomes, and RNA-seq. Moreover, our non-exclusive relationship with Google is founded on the principle that our groups can leverage complementary skills to make products that can not only serve the needs of Broad, but also help serve the needs of researchers around the world. Therefore, as we migrate each of our pipelines to the cloud to meet our own needs, we also plan to make them available to the greater genomics community through a Software-as-a-Service model.

This is an exciting time for us at Broad. For more than a decade we have served the genomics community by acting as a hub for data generation; now, we are extending this mission to encompass not only sequencing services, but also data services. We believe that by expanding access to our tools and optimizing our pipelines for the cloud, will enable the community to benefit from the enormous effort we have invested. We look forward to expanding the scope of this mission in the years to come.