Machine learning systems are increasingly influencing many aspects of everyday life, and are used by both the hardware and software products that serve people globally. As such, researchers and designers seeking to create products that are useful and accessible for everyone often face the challenge of finding data sets that reflect the variety and backgrounds of users around the world. In order to train these machine learning systems, open, global — and growing — datasets are needed.

Over the last six months, we’ve seen such a dataset emerge from users of Quick, Draw!, Google’s latest approach to helping wide, international audiences understand how neural networks work. A group of Googlers designed Quick, Draw! as a way for anyone to interact with a machine learning system in a fun way, drawing everyday objects like trees and mugs. The system will try to guess what their drawing depicts, within 20 seconds. While the goal of Quick, Draw! was simply to create a fun game that runs on machine learning, it has resulted in 800 million drawings from twenty million people in 100 nations, from Brazil to Japan to the U.S. to South Africa.

And now we are releasing an open dataset based on these drawings so that people around the world can contribute to, analyze, and inform product design with this data. The dataset currently includes 50 million drawings Quick Draw! players have generated (we will continue to release more of the 800 million drawings over time).

It’s a considerable amount of data; and it’s also a fascinating lens into how to engage a wide variety of people to participate in (1) training machine learning systems, no matter what their technical background; and (2) the creation of open data sets that reflect a wide spectrum of cultures and points of view. 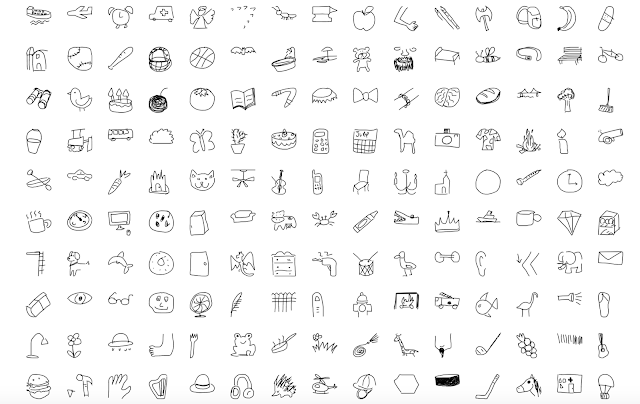 Seeing national — and global — patterns in one glance
To understand visual patterns within the dataset quickly and efficiently, we worked with artist Kyle McDonald to overlay thousands of drawings from around the world. This helped us create composite images and identify trends in each nation, as well across all nations. We made animations of 1000 layered international drawings of cats and chairs, below, to share how we searched for visual trends with this data:

Cats, made from 1000 drawings from around the world:

Chairs, made from 1,000 drawings around the world: 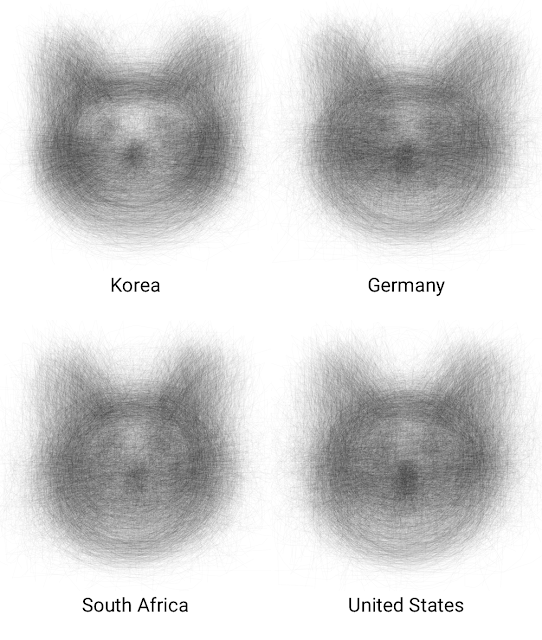 However, for objects that might be familiar to some cultures, but not others, we saw notable differences. Sandwiches took defined forms or were a jumbled set of lines; mug handles pointed in opposite directions; and chairs were drawn facing forward or sideways, depending on the nation or region of the world: 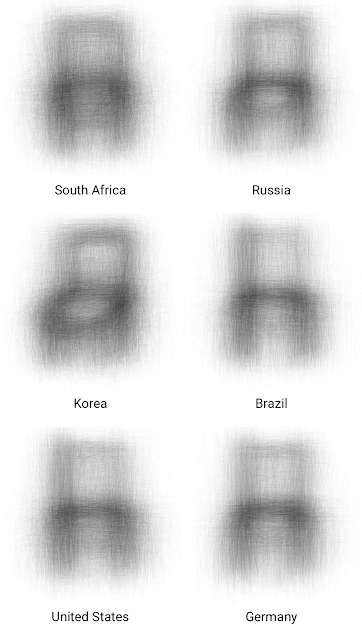 One size doesn’t fit all
These composite drawings, we realized, could reveal how perspectives and preferences differ between audiences from different regions, from the type of bread used in sandwiches to the shape of a coffee cup, to the aesthetic of how to depict objects so they are visually appealing. For example, a more straightforward, head-on view was more consistent in some nations; side angles in others.

Overlaying the images also revealed how to improve how we train neural networks when we lack a variety of data — even within a large, open, and international data set. For example, when we analyzed 115,000+ drawings of shoes in the Quick, Draw! dataset, we discovered that a single style of shoe, which resembles a sneaker, was overwhelmingly represented. Because it was so frequently drawn, the neural network learned to recognize only this style as a “shoe.”

But just as in the physical world, in the realm of training data, one size does not fit all. We asked, how can we consistently and efficiently analyze datasets for clues that could point toward latent bias? And what would happen if a team built a classifier based on a non-varied set of data?
Diagnosing data for inclusion
With the open source tool Facets, released last month as part of Google’s PAIR initiative, one can see patterns across a large dataset quickly. The goal is to efficiently, and visually, diagnose how representative large datasets, like the Quick, Draw! Dataset, may be.

Here’s a screenshot from the Quick,Draw! dataset within the Facets tool. The tool helped us position thousands of drawings by "faceting" them in multiple dimensions by their feature values, such as country, up to 100 countries. You, too, can filter for for features such as “random faces” in a 10-country view, which can then be expanded to 100 countries. At a glance, you can see proportions of country representations. You can also zoom in and see details of each individual drawing, allowing you to dive deeper into single data points. This is especially helpful when working with a large visual data set like Quick, Draw!, allowing researchers to explore for subtle differences or anomalies, or to begin flagging small-scale visual trends that might emerge later as patterns within the larger data set. 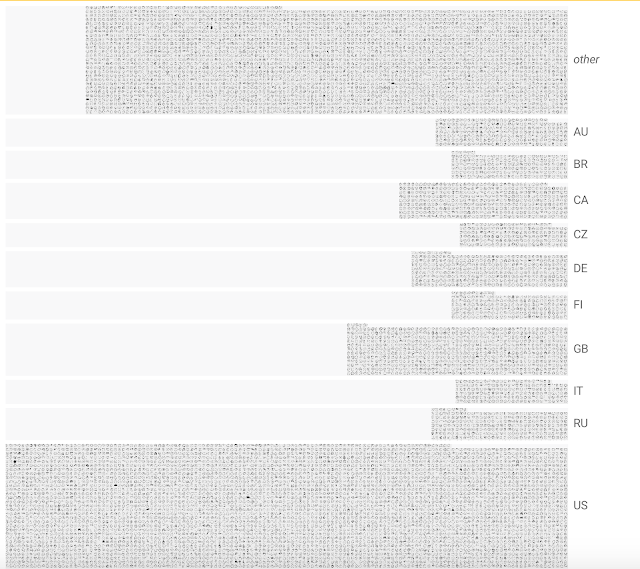 Here’s the same Quick, Draw! data for “random faces,” faceted for 94 countries and seen from another view. It’s clear in the few seconds that Facets loads the drawings in this new visualization that the data is overwhelmingly representative of the United States and European countries. This is logical given that the Quick, Draw! game is currently only available in English. We plan to add more languages over time. However, the visualization shows us that Brazil and Thailand seem to be non-English-speaking nations that are relatively well-represented within the data. This suggested to us that designers could potentially research what elements of the interface design may have worked well in these countries. Then, we could use that information to improve Quick,Draw! in its next iteration for other global, non-English-speaking audiences. We’re also using the faceted data to help us figure out how prioritize local languages for future translations. 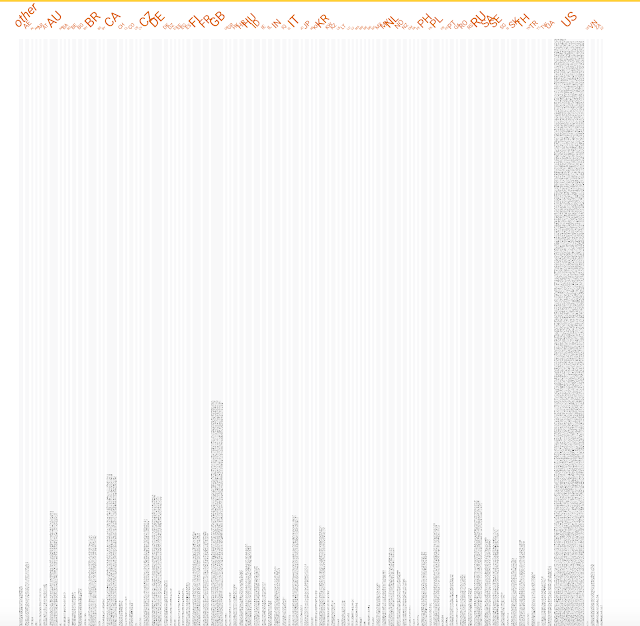 Another outcome of using Facets to diagnose the Quick, Draw! data for inclusion was to identify concrete ways that anyone can improve the variety of data, as well as check for potential biases. Improvements could include:
By releasing this dataset, and tools like Facets, we hope to facilitate the exploration of more inclusive approaches to machine learning, and to turn those observations into opportunities for innovation. We’re just beginning to draw insights from both Quick, Draw! and Facets. And we invite you to draw more with us, too.