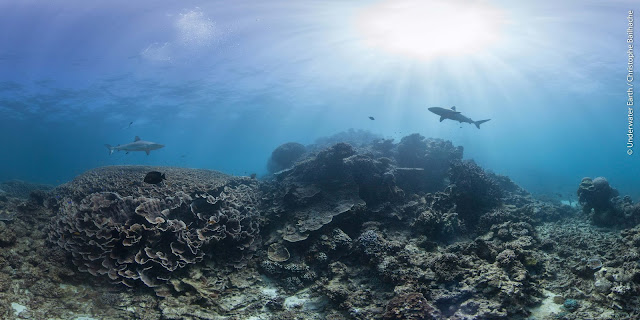 Editor’s note: Today is World Oceans Day, a day when people around the globe celebrate the world’s oceans and the life they sustain.
On Australia’s western coast, you will find the world’s largest fringing coral reef: Ningaloo. The Ningaloo Coast is World Heritage listed and home to 300 species of coral, 500 fish species and megafauna such as whale sharks.
Late last year, we got to walk the coastal trails and dive beneath the waves to photograph this ocean paradise--and today, on World Oceans Day, we're inviting people across the globe to gaze at the turquoise waters and virtually swim with manta ray, stingray and sharks on Google Street View.
Partnering with Parks and Wildlife Service WA and not-for-profit Underwater Earth, we explored Ningaloo from every angle, collecting imagery above, below and along the coast.
Adventurers can meander down to the shoreline of Cape Range National Park and to Oyster Stacks, within the Mandu Sanctuary Zone of Ningaloo Marine Park, before going for a digital snorkel at high tide with a rich diversity of fish--we’ve already carefully navigated the sharp oyster shells for you.

Walk the Oyster Stacks Snorkelling Area before stepping into the water.

Look beneath the surface at Oyster Stacks Snorkelling Area.
Or travel up to the Muiron Islands and to Whalebone--a dive site named after whalebone that has now been washed away, grown over, or reabsorbed into the fabric of the reef, and known for its swim-throughs and overhangs. This area is exposed to the swell and waves of the Indian Ocean meaning few branching corals can grow here, so it is dominated by a myriad of hard plating corals and stunning colourful soft corals, and is a popular spot for turtles too!

Whalebone is a beautiful dive site on the western side of South Muiron Island.
Whales, dolphins, manta rays, huge cod, turtles and whale sharks are abundant here, and this is one of many reasons this location is critical to the health of the ocean.
“We have been capturing underwater Street View imagery, partnering with Google, for over nine years. We believe in the importance of revealing precious ocean environments to the world to help educate and inspire ocean protection and conservation. Ningaloo Reef is simply too precious to lose,” said Christophe Bailhache, Co-founder of not-for-profit Underwater Earth, and underwater photographer for this Ningaloo collection.
“What an amazing opportunity to not only let Ningaloo enthral, excite and engage an even broader audience, but importantly help better understand this most beautiful and fragile of underwater wonders in the changing world we live in. Thank you Google and Underwater Earth,” said Dr Peter Barnes, Ningaloo Marine Park Coordinator.
We see this Street View capture as a chance to document the Ningaloo Coast in its current condition and keep track of how it's evolving. And by raising awareness and making sure that as many people as possible see this natural wonder, and get to understand its significance, we hope to do our bit to help protect this incredible place.