Cloud Tools put the power of Google App Engine in the same IDE alongside of your mobile client, giving you all the same Java language tools for both sides of your app, as well as making it far easier for you to keep them in sync as each of them changes.

To get started with Cloud Tools for Android Studio, add a New Module to your Android Studio project, choose Google Cloud Module and you’ll have three choices: 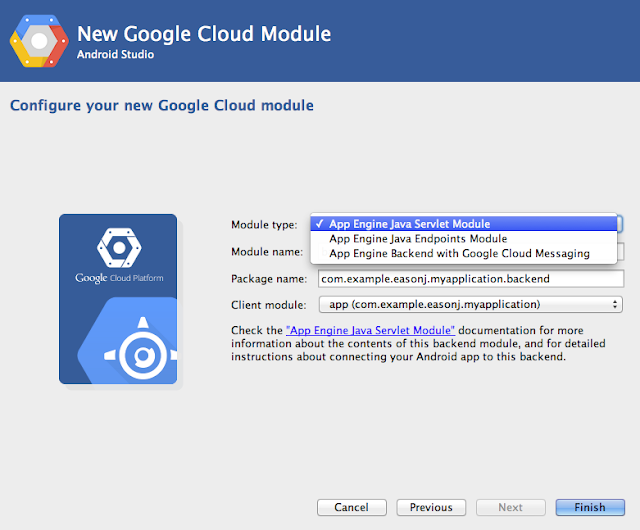 The Java Servlet Module gives you a plain servlet class for you to implement as you see fit. If you’d like help building your REST endpoints with declarative routing and HTTP verbs and automatic Java object serialization to and from JSON, then you’ll want the Java Endpoints Module. If you want the power of endpoints, along with the ability to send notifications from your server to your clients, then choose Backend with Google Cloud Messaging.

Once you’re done, you’ll have your service code right next to your client code: 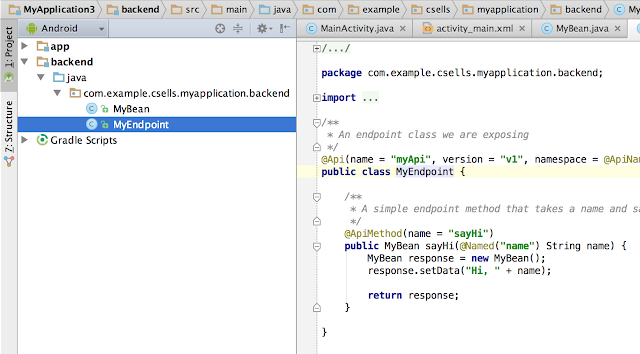 Not only does this make it very convenient to build and test your entire end-to-end, but we also dropped a little extra something into your app’s build.gradle file: 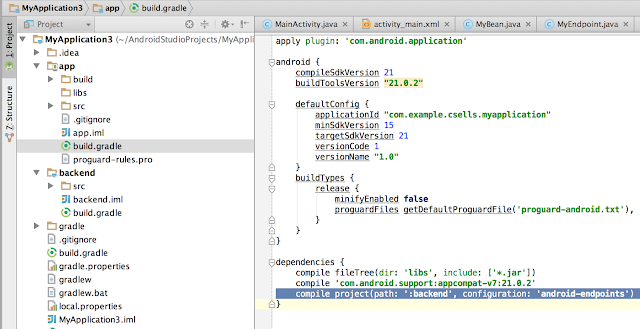 The android-endpoints configuration build step in your build.gradle file creates a client-side library for your server-side endpoint

The updated Gradle file will now create a library for use in your app’s client code that changes when your service API changes. This library lets you call into your service from your client and provides full code completion as you do:

Instead of writing the code to create HTTP requests by hand, you can make calls via the library in a typesafe manner and the marshalling from JSON to Java will be handled for you, just like on the server-side (but in reverse, of course).

Meanwhile, back on the server-side, as you make changes to your endpoints, we’re watching to make sure that they’re in good working order even before you compile by checking the attributes as you type: 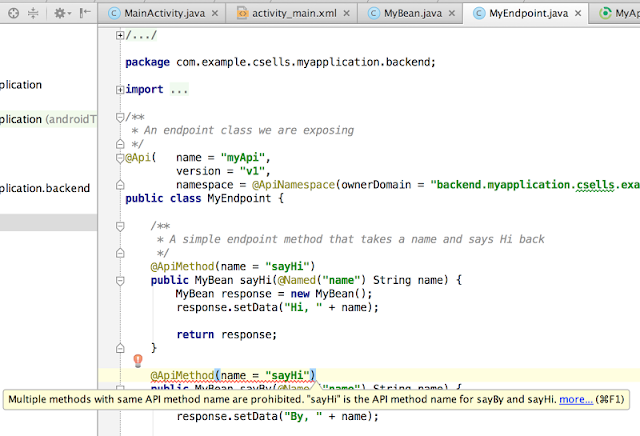 Cloud Tools will detect errors in your endpoint attributes

Here, Cloud Tools have found a duplicate name in the ApiMethod attribute, which is easy to do if you’re creating a new method from an existing method.

Creating an Endpoint from an Objectify Entity

If, as part of your endpoint implementation, you decide to take advantage of the popular Objectify library, you’ll find that Cloud Tools provides special support for you. When you right-click (or control-click on the Mac) on a file containing an Objectify entity class, you’ll get the Generate Cloud Endpoint from Java class option: 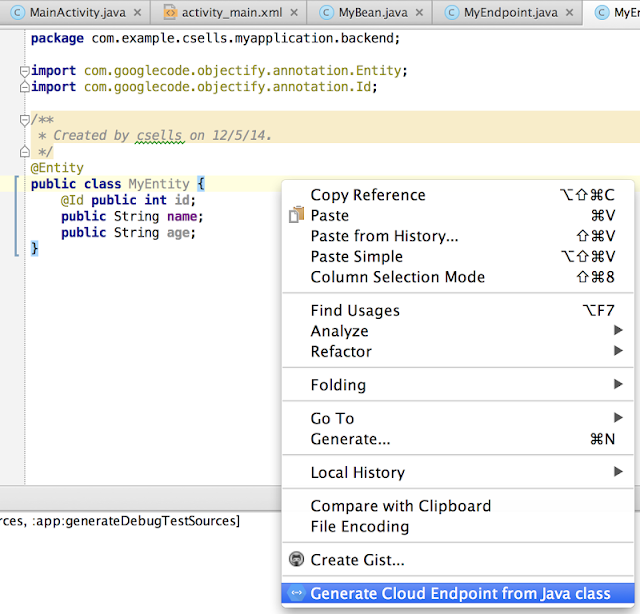 If you’re running this option on a Java class that isn’t built with Objectify, then you’re going to get an endpoint with empty methods for get and insert operations that you can implement as appropriate. However, if you do this with an Objectify entity, you’ll get a fully implemented endpoint: 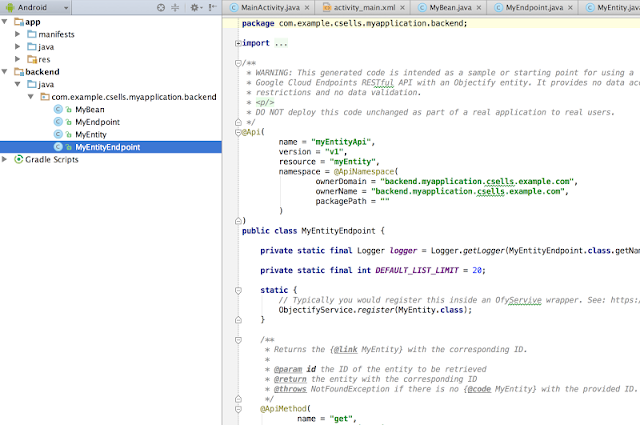 As an Android developer, you’re used to deploying your client first in the emulator and then into a local device. Likewise, with the service, you’ll want to test first to your local machine and then, when you’re ready, deploy into a Google App Engine project. You can run your service app locally by simply choosing it from the Configurations menu dropdown on the toolbar and pressing the Run button: 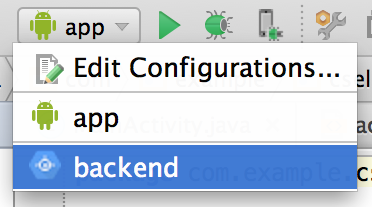 This will build and execute your service on http://localhost:8080/ (by default) so that you can test against it with your Android app running in the emulator. Once you’re ready to deploy to Google Cloud Platform, you can do so by selecting the Deploy Module to App Engine option from the Build menu, where you’ll be able to choose the source module you want to deploy, log into your Google account and pick the target project to which you’d like to deploy: 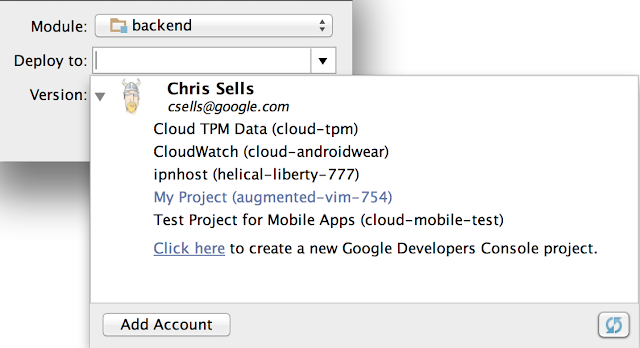 Cloud Tools beta required some extra copying and pasting to get the Google login to work, but all of that’s gone now in this release.

We’re excited to get this release into your hands, so if you’ve haven’t downloaded it yet, then go download Android Studio 1.0 right now! To take advantage of Cloud Tools for Android Studio, you’ll want to sign up for a free Google Cloud Platform trial. Nothing is stopping you from building great Android apps from front to back. If you’ve got suggestions, drop us a line so that we can keep improving. We’re just getting started putting Google Cloud Platform tools in your hands. We can’t wait to see what you’ll build.