We’re incredibly excited to share with you the new analytics product innovations announced just moments ago at the Google Performance Summit. These innovations for the Analytics 360 Suite are more integrated, more collaborative, and use built-in intelligence to handle more data than ever in our new multi-screen, cross-channel world.

Why are these innovations arriving now? Because across the millions of websites using Google Analytics today, more than half of all web traffic now comes from smartphones and tablets1. And every year, over half of the trillions of searches on Google happen on mobile2.

This shift to mobile has made marketers' jobs more complex. We all have more opportunities than ever to reach consumers all day and measure their behavior in their I-want-to-know, I-want-to-go, I-want-to-do and I want-to-buy moments. But it's also harder to keep all the channels and touchpoints straight. You can’t market effectively in today’s world with products that were designed for a desktop-first world.

Two months ago we announced the Google Analytics 360 Suite, an enterprise-class modern measurement solution built from the ground up to help enterprise marketers and analytics professionals succeed in this new multi-screen world. 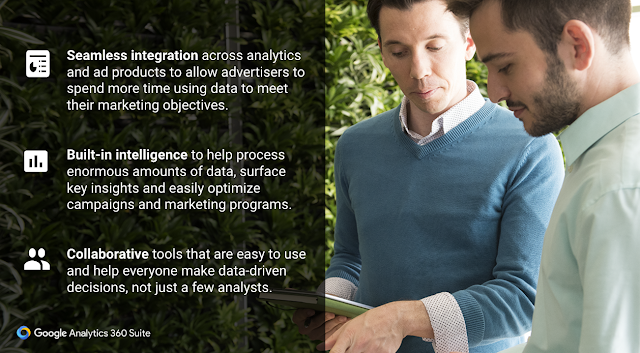 Read on to learn the analytics highlights from today’s announcements.

Google Optimize 360, our website testing and personalization product, is now available in paid BETA globally. The results from our closed beta have been amazing: one of our beta customers reduced the time to deploy a site experiment from three days to 10 minutes. Optimize 360’s deep integrations with Analytics 360 increase testing agility and reduce setup times. With just a few clicks, you can use the audiences and goals you’ve already created in Analytics 360 to run experiments with Optimize 360.

Google Data Studio 360, our data visualization product, will start rolling out in paid BETA in the US. This is our enterprise version with licensing starting at 200 users. Data Studio 360 allows you to connect to all your data with native integrations across many popular Google products, as well as non-Google data. Visualize your data by creating reports and dashboards. Share your data across your organization with built-in, real-time collaboration.

Google Data Studio is a completely new, free version of Data Studio 360 that we’re launching today! Starting now, anyone can use Data Studio to create up to 5 reports with unlimited sharing, editing and collaboration. We’re starting the BETA in the U.S. and rolling out to other regions throughout the year.

With massive volumes of data being created across screens, channels and touchpoints, built-in intelligence has become foundational in approach to analytics product development. This means we’re doing more of the heavy lifting for you, and we’re seeing a tremendous response from businesses. For example, Smart Goals in Analytics is now enabling more than 60K advertisers to optimize their AdWords performance. You’ll continue to see exciting developments in the future related to intelligence.

As consumers blur the lines between online and offline, it’s more important than ever to build your business in new ways. Google is excited to go on this journey with you, and we're building much more for the multi-screen, cross-channel world. Visit our website to learn more about all the new products in the Analytics 360 Suite.

To see the full range of ads and analytics innovations announced this morning, watch the Google Performance Summit keynote here.