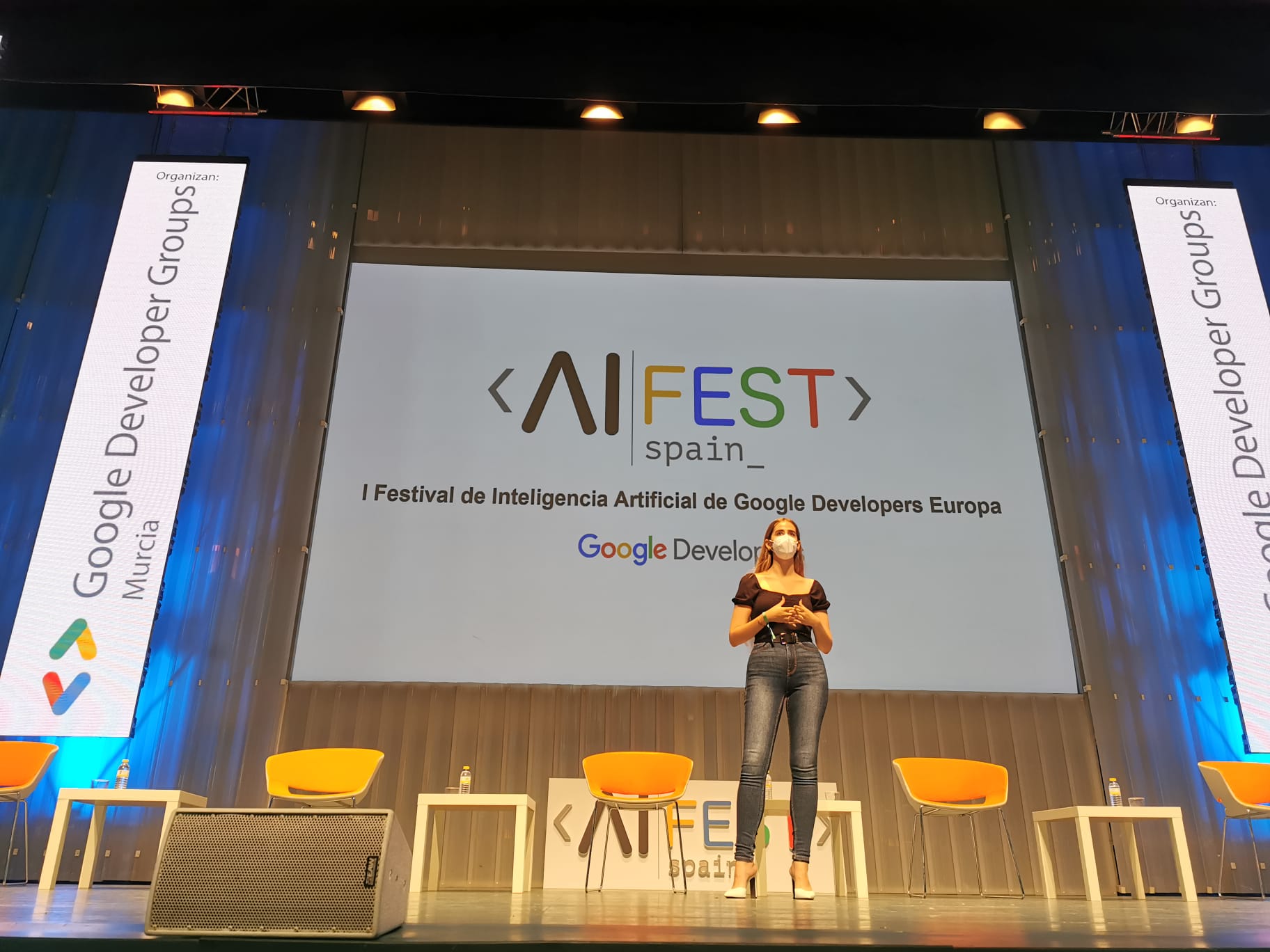 Google Developer Groups (GDGs) around the world are in a unique position to organize events on technology topics that community members are passionate about. That’s what happened in Spain in July 2021, where two GDG chapters decided to put on an event called AI Fest after noticing a lack of conferences dedicated exclusively to artificial intelligence. “Artificial intelligence is everywhere, although many people do not know it,” says Irene Ruiz Pozo, the organizer of GDG Murcia and GDG Cartagena. While AI has the potential to transform industries from retail to real estate with products like Dialogflow and Lending DocAI, “there are still companies falling behind,” she notes.

Irene and her GDG team members recognized that creating a space for a diverse mix of people—students, academics, professional developers, and more—would not only enable them to share valuable knowledge about AI and its applications across sectors and industries, but it could also serve as a potential path for skill development and post-pandemic economic recovery in Spain. In addition, AI Fest would showcase GDGs in Spain as communities offering developer expertise, education, networking, and support.

Using the GDG network to find sponsors, partners, and speakers

The GDG team found plenty of organizations eager to help: universities, nonprofit organizations, government entities, and private companies. The final roster included the Instituto de Fomento, the economic development agency of Spain’s Murcia region; the city council of Cartagena; Biyectiva Technology, which develops AI tools used in medicine, retail, and interactive marketing; and the Polytechnic University of Cartagena, where Irene founded and led the Google Developer Student Club in 2019 and 2020. Some partners also helped with swag and merchandising and even provided speakers. “The CEOs and different executives and developers of the companies who were speakers trusted this event from the beginning,” Irene says.

A celebration of AI and its potential

The event organizers lined up a total of 55 local and international speakers over the two-day event. Due to the ongoing COVID-10 pandemic, in-person attendance was limited to 50 people in a room at El Batel Auditorium and Conference Center in Cartagena, but sessions—speakers, roundtables, and workshops—were also live-streamed on YouTube on three channels to a thousand viewers.

Some of the most popular sessions included economics professor and technology lab co-founder Andrés Pedreño on "Competing in the era of Artificial Intelligence," a roundtable on women in technology; Intelequa software developer Elena Salcedo on "Happy plants with IoT''; and Google Developer Expert and technology firm CEO Juantomás García on "Vertex AI and AutoML: Democratizing access to AI." The sessions were also recorded for later viewing, and in less than a week after the event, there were more than 1500 views in room A, over 1100 in room B and nearly 350 views in the Workshops room.

The event made a huge impact on the developer community in Spain, setting an example of what tech-focused gatherings can look like in the COVID-19 era and how they can support more education, collaboration, and innovation across a wide range of organizations, ultimately accelerating the adoption of AI. Irene also notes that it has helped generate more interest in GDGs and GDSCs in Spain and their value as a place to learn, teach, and grow. “We’re really happy that new developers have joined the communities and entrepreneurs have decided to learn how to use Google technologies,” she says.

The effect on the GDG team was profound as well. “I have remembered why I started creating events--for people: to discover the magic of technology,” Irene says.

Irene and her fellow GDG members are already planning for a second installment of AI Fest in early 2022, where they hope to be able to expect more in-person attendance. The team would also like to organize events focused on topics such as Android, Cloud, AR /VR, startups, the needs of local communities, and inclusion. Irene, who serves as a Women Techmakers Ambassador, is particularly interested in using her newly expanded network to host events that encourage women to choose technology and other STEM areas as a career.

Finally, Irene hopes that AI Fest will become an inspiration for GDGs around the world to showcase the potential of AI and other technologies. It’s a lot of work, she admits, but the result is well worth it. “My advice is to choose the area of technology that interests you the most, get organized, relax, and have a good team,” she advises.