If you could have an app to engage with your Government and leaders, what would you want it to do?
Last year, together with MyGov, the citizen engagement platform of the Government of India, we invited Indian citizens to share their ideas on what features an app of the Prime Minister’s Office (PMO) should include. We were overwhelmed by the response: MyGov received over 10,000 entries with more than 45,000 ideas. The resulting PMO app showcases the accomplishments we can achieve when we work together.
Thanks to Team Sanskrit, Indians now have access to the winning PMO app that fuses several ideas submitted from around the country. This app gives citizens access to critical information about flagship programmes. In addition, the app provides an overview of the Prime Minister’s major initiatives, news and social media updates, and enables people to make a donation to the Prime Minister’s National Relief Fund - all this and more in 10 Indian languages. 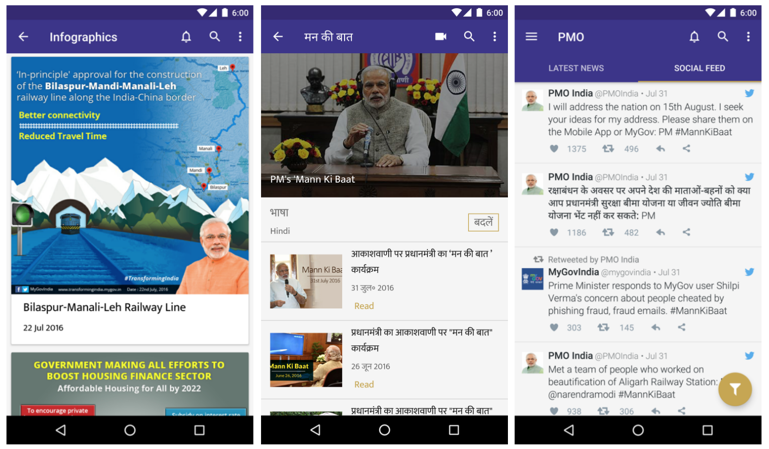 At a ceremony with Prime Minister Modi on August 6th, we will be felicitating Team Sanskrit’s members: Raghav Sarin, Gyan Lakhwani, Prajwal Seth, Preet S. Khalsa, Naman Dwivedi and Pranav Sethi. They will be visiting the Google headquarters in Mountain View, California, where they will get to spend some quality time interacting with our engineering and Android teams.

We worked closely with MyGov across all three phases of the contest, from soliciting ideas to creating a blueprint based on the top ideas. This blueprint served as a guide for the developer teams to build their wireframe. Google engineers provided mentoring to the five finalist teams to help them refine their apps.
For over 225 million people in India, the smartphone is the gateway to the Internet. Thanks to the students and the launch of the newly built PMO app, mobile phones open doors to the Prime Minister himself. With increasing connectivity across the country, the possibilities for  collaboration and innovations are endless.
Posted by Chetan Krishnaswamy, Country Head - Public Policy, Google India