Deployment manager supports a wide array of GCP resources. Here's a complete list of supported resources and associated properties, which you can also retrieve with this gcloud command:

Deployment Manager is often used alongside a version control system into which you can check in the definition of your infrastructure. This approach is commonly referred to as "infrastructure as code" It’s also possible to pass properties to Deployment Manager directly using gcloud command, but that's not a very scalable approach.

Anatomy of a Deployment Manager configuration

To understand how things fit together, let’s look at the set of files that are used to create a simple network with two subnets and a single deployed instance.

The configuration consists of three files:
You can use template files as logical units that break down the configuration into smaller and reusable parts. Templates can then be composed into a larger deployment. In this example, network configuration and instance deployment have been broken out into their own templates.

Here’s how to understand the distinction between the template and environment variables. Imagine you have two projects where you wish to deploy identical instances, but to different zones. In this case, name your instances based on the Project ID and Deployment name found from the environment variables, and set the zone through a template variable.

For this example, we’ve decided to keep things simple and use templates written in Jinja2.

This file creates a network and its subnets whose name and range are passed through from the variable declaration in net-config.yaml, the calling configuration file. 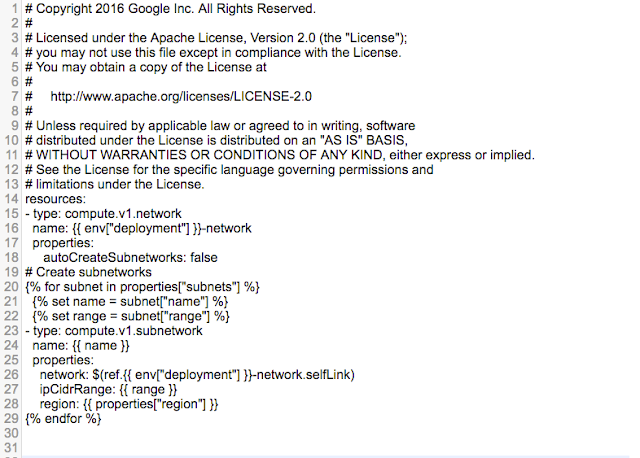 The “for” subnet loop repeats until it has read all the values in the subnets properties. The config file below declares two subnets with the following values:


The deployment will be deployed into the us-central1 region. You can easily change this by changing the value of the “region” property in the configuration file without having to modify the network template itself.

The instance file, in this case "instance.jinja," defines the template for an instance whose machine type, zone and subnet are defined in the top level configuration file’s property values. 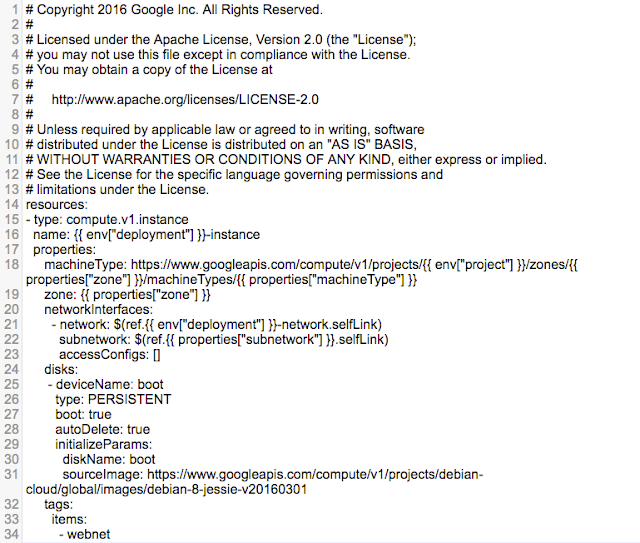 This file, called net-config.yaml, is the main configuration file that marshals the templates that we defined above to create a network with a single VM. 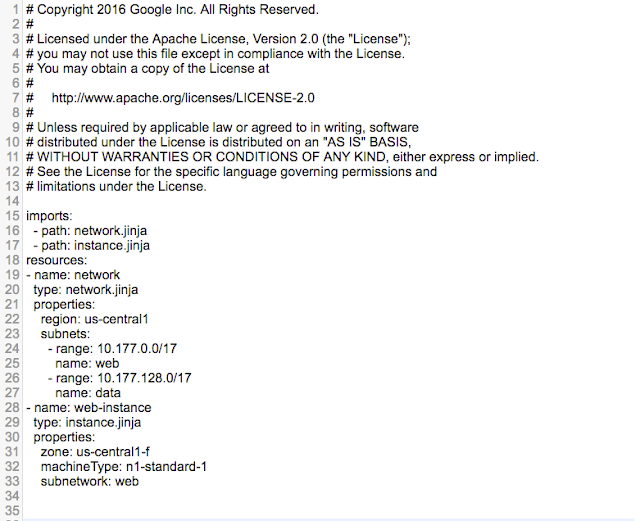 Lines 28 to 33 define the instance values.


You'll see a message indicating that the deployment has been successful

You can see the deployment from Cloud Console.

Note that the instance is named after the deployment specified in instance.jinja.

You can explore the configuration by looking at the network and Compute Engine menus: 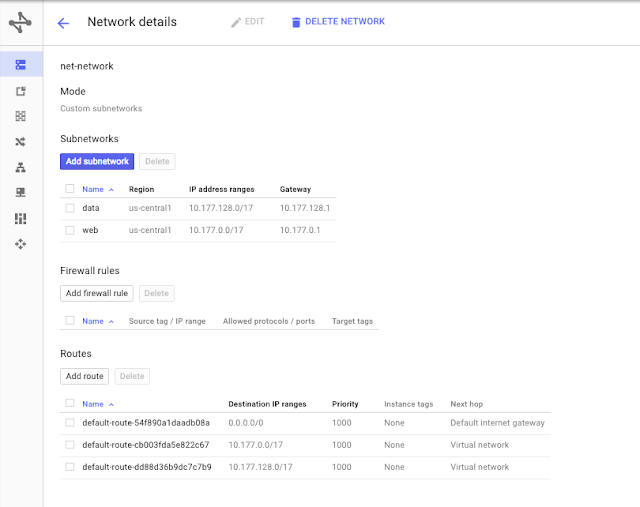 You can delete a deployment from Cloud Console by clicking the delete button or with the following gcloud command:


You'll be prompted for verification that you want to proceed.

Once you understand the basics of Deployment Manager, there’s a lot more you can do. You can take the example code snippets that we walked through here and build more complicated scenarios, for example, implementing a VPN that connects back to your on premises environment. There are also many Deployment Manager example configurations on Github.

Then, go ahead and start thinking about advanced Deployment Manager features such as template modules and schemas. And be sure to let us know how it goes.