If you’re looking for a fun way to get up-to-speed on Kubernetes and microservices without leaving the comfort of your desk, look no further. The new online course “Scalable Microservices with Kubernetes” on Udacity is designed for developers and systems administrators that want to hone their automation and distributed systems management skills, and is led by Google Cloud Platform’s very own Kelsey Hightower and Carter Morgan. There’s also a guest appearance from Battery Ventures Technology Fellow and DevOps legend Adrian Cockcroft!

To excel at the course, you should be fluent in at least one programming language, be familiar with general virtualization concepts and know your way around a Linux command line. Udacity estimates that students can complete the course in about one month.

Successful completion of the course counts towards Udacity’s upcoming DevOps Engineer Nanodegree — one of several Nanodegrees co-developed by Google. Best of all, the course is free! 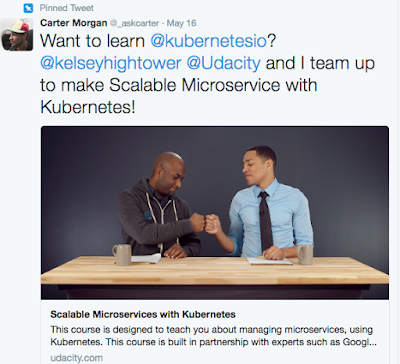