Posted by Josh Gordon on behalf of the TensorFlow team

We recently published a collection of performance benchmarks that highlight TensorFlow's speed and scalability when training image classification models, like InceptionV3 and ResNet, on a variety of hardware and configurations.

To help you build highly scalable models, we've also added a new High-Performance Models guide to the performance site on tensorflow.org. Together with the guide, we hope these benchmarks and associated scripts will serve as a reference point as you tune your code, and help you get the most performance from your new and existing hardware.

When running benchmarks, we tested using both real and synthetic data. We feel this is important to show, as it exercises both the compute and input pipelines, and is more representative of real-world performance numbers than testing with synthetic data alone. For transparency, we've also shared our scripts and methodology.

Collected below are highlights of TensorFlow's performance when training with an NVIDIA® DGX-1™, as well as with 64 NVIDIA® Tesla® K80 GPUs running in a distributed configuration. In-depth results, including details like batch-size and configurations used for the various platforms we tested, are available on the benchmarks site.

Our benchmarks show that TensorFlow has nearly linear scaling on an NVIDIA® DGX-1™for training image classification models with synthetic data. With 8 NVIDIA Tesla P100s, we report a speedup of 7.99x (99% efficiency) for InceptionV3 and 7.91x (98% efficiency) for ResNet-50, compared to using a single GPU.

The following are results comparing training with synthetic and real data. The benchmark results show a small difference between training data placed statically on the GPU (synthetic) and executing the full input pipeline with data from ImageNet. One strength of TensorFlow is the ability of its input pipeline to saturate state-of-the-art compute units with large inputs. 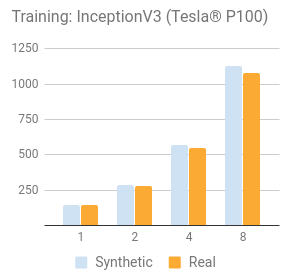 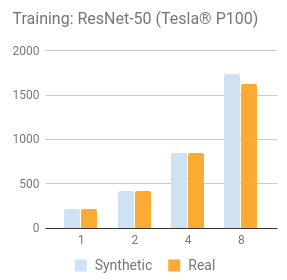 With 8 NVIDIA® Tesla® K80s in a single-server configuration, TensorFlow has a 7.4x speedup on Inception v3 (93% efficiency) and a 7.4x speedup on ResNet-50, compared to a single GPU. For this benchmark, we used Google Compute Engine instances.

Distributed Training with NVIDIA® Tesla® K80 (up to 64 GPUs)

During our testing of the DGX-1 and other platforms, we explored a variety of configurations using NCCL, a collective communications library, part of the NVIDIA Deep Learning SDK. Our hypothesis before testing began was that replicating the variables across GPUs and syncing them with NCCL would be the optimal approach. The results were not always as expected. Optimal configurations varied depending not only on the GPU, but also on the platform and model tested. On the DGX-1, for example, VGG16 and AlexNet performed best when replicating the variables on each of the GPUs and updating them using NCCL, while InceptionV3 and ResNet performed best when placing the shared variable on the CPU. These intricacies highlight the need for comprehensive benchmarking. Models have to be tuned for each platform, and a one size fits all approach is likely to result in suboptimal performance in many cases.

To get peak performance, it is necessary to benchmark with a mix of settings to determine which ones are likely to perform best on each platform. The script that accompanies the article on creating High-Performance Models was created not only to illustrate how to achieve the highest performance, but also as a tool to benchmark a platform with a variety of settings. The benchmarks page lists the configurations that we found which provided optimal performance for the platforms tested.

As many people have pointed out in response to various benchmarks that have been performed on other platforms, increases to samples per second does not necessarily correlate to faster convergence, and as batch sizes increase it can be more difficult to converge to the highest accuracy levels.

As a team, we hope to do future tests that focus on time to convergence to high levels of accuracy. We hope these numbers and the guide will prove useful to you as you tune your code for performance.

We'd like to thank NVIDIA for sharing a DGX-1 for benchmark testing and for their technical assistance. We're looking forward to NVIDIA's upcoming Voltaarchitecture, and to working closely with them to optimize TensorFlow's performance there, and to expand support for FP16.

Thanks for reading, and as always, we look forward to working with you on forums like GitHub issues, Stack Overflow, the [email protected]list, and @TensorFlow.