Crossposted on the Google Research Blog

Tangent is a new, free, and open source Python library for automatic differentiation. In contrast to existing machine learning libraries, Tangent is a source-to-source system, consuming a Python function f and emitting a new Python function that computes the gradient of f. This allows much better user visibility into gradient computations, as well as easy user-level editing and debugging of gradients. Tangent comes with many more features for debugging and designing machine learning models.
This post gives an overview of the Tangent API. It covers how to use Tangent to generate gradient code in Python that is easy to interpret, debug and modify. 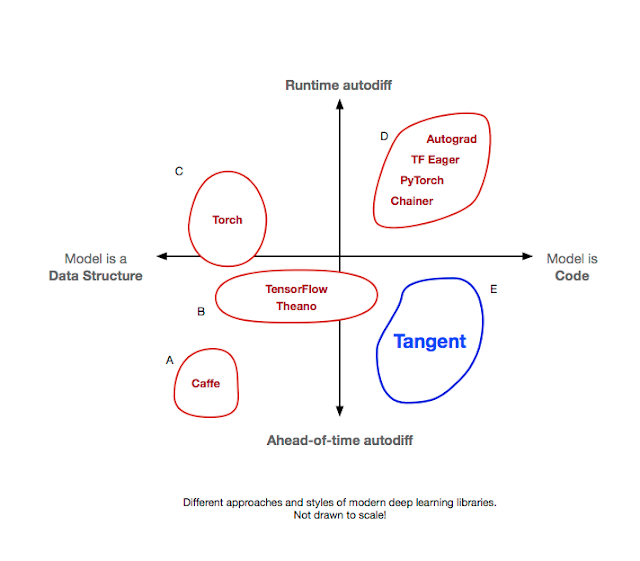 How do we automatically generate derivatives of plain Python code? Math functions like tf.exp or tf.log have derivatives, which we can compose to build the backward pass. Similarly, pieces of syntax, such as  subroutines, conditionals, and loops, also have backward-pass versions. Tangent contains recipes for generating derivative code for each piece of Python syntax, along with many NumPy and TensorFlow function calls.

Tangent has a one-function API:
Here’s an animated graphic of what happens when we call tangent.grad on a Python function:

If you want to print out your derivatives, you can run
Under the hood, tangent.grad first grabs the source code of the Python function you pass it. Tangent has a large library of recipes for the derivatives of Python syntax, as well as TensorFlow Eager functions. The function tangent.grad then walks your code in reverse order, looks up the matching backward-pass recipe, and adds it to the end of the derivative function. This reverse-order processing gives the technique its name: reverse-mode automatic differentiation.

Tangent is open source now at github.com/google/tangent. Go check it out for download and installation instructions. Tangent is still an experiment, so expect some bugs. If you report them to us on GitHub, we will do our best to fix them quickly.

We intend to develop Tangent together as a community. We welcome pull requests with fixes and features. Happy deriving!

Bart van Merriënboer contributed immensely to all aspects of Tangent during his internship, and Dan Moldovan led TF Eager integration, infrastructure and benchmarking. Also, thanks to the Google Brain team for their support of this post and special thanks to Sanders Kleinfeld and Aleks Haecky for their valuable contribution for the technical aspects of the post.