From Kawhi Leonard’s buzzer beating shot in the NBA semi-finals, to Bianca Andreescu’s historic run at the Rogers Cup and the US Open, Canada searched for champions on Google in 2019, closing out the decade on a winning note.

The Year in Search is Google’s annual analysis of trillions of searches performed globally throughout the year. Here are Canada’s top trending searches of 2019: 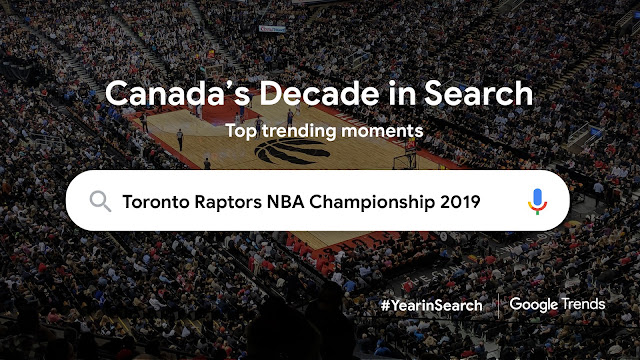 View all of Canada’s Trending Searches for 2019 here.

GOOGLE’S 10 TRENDING CANADIAN MOMENTS OF THE DECADE
1. Toronto Raptors win the NBA Championship for the first time ever
2. Bianca Andreescu becomes highest ranked Canadian tennis player of all time; wins two grand slams
3. Drake dominated pop music this past decade; the Toronto native beat the Beatles’ 50 year record for the most top 10 singles on Billboard’s Top 100
4. The Humboldt Broncos Bus Crash unites the nation in tragedy
5. Canadians from coast to coast tuned in to watch The Tragically Hip’s final concert following Gord Downie’s cancer diagnosis
6. Canada meets its target to resettle 25,000 Syrian Refugees
7. During his third mission to space, Colonel Chris Hadfield became the first Canadian Commander of the ISS, making him the first Canadian in history to command a spaceship
8. Justin Bieber is currently the most subscribed to artist on YouTube with over 20 billion views. Trending searches for Bieber peaked in 2011 when Never Say Never debuted.
9. Canada celebrates the heroes of the Fort McMurray wildfire
10. Canada arrives on the world stage like never before with the Vancouver 2010 Olympics

A decade of fandemonium
It’ll come as no surprise that the Vancouver Olympics was the top trending search of 2010. We were brought to tears by Joannie Rochette’s courageous bronze medal figure skating win, just days after her mother had died. We flooded streets across Canada in celebration after the women and men’s Canadian hockey teams clinched gold. And the nation began our decade-long love affair with ice dancers Tessa Virtue and Scott Moir.

The rise in prominence of Canadian sports continued throughout the decade. The Toronto Blue Jaysdominated search in 2015, with Jose Bautista’s bat flip being one of the top trending moments of the year. In 2017, the Ottawa Senators (almost) made it to the Stanley Cup finals in a run that landed them at the top of trending searches. In 2019, searches for Kawhi Leonard grew by almost 90% worldwide following his buzzer beater shot in the NBA semi-finals while prompting a spike in Canadian searches for “how to sign my kid up for basketball camp?”

Within a few months, Canada went from #WeTheNorth to #SheTheNorth. Canadians searched for “what is Bianca Andreescu’s ranking?” after beating Serena Williams in incredible back-to-back victories at the Rogers Cup and US Open.

A decade of celebrating Canadian heroes
In the past decade, we watched Chris Hadfield become the first Canadian commander of the International Space Station and civil rights activist and businesswoman Viola Desmond added to our currency. People marched in solidarity at Women’s Marches in January of 2017 and firefighters and first responders became national heroes following the fires in Slave Lake & Fort McMurray, Alberta.

Canadian music’s global coming of age
In the past decade, YouTube has changed the definition of fame: Stratford’s Justin Bieber is currently the most subscribed artist on YouTube (47.2 million subscribers), appears in six videos with over one billion views and has over 19 billion views on his Official Artist Channel.

In 2015, news of Gord Downie’s cancer diagnosis and The Tragically Hip’s summer tour generated an outpouring of emotion from Canadians far and wide. At The Hip’s final concert in Kingston, Ontario, their last song, Ahead by a Century, brought thousands of fans from St. John’s to White Horse together in a moment of national catharsis.

Maybe it was God’s plan? Drake is now just one song away from tying the all-time record for the most career entries on the Billboard Hot 100. And in the last decade, Drake has become the undeniable unofficial global ambassador for Toronto — the Toronto native literally gave the city a new moniker.

2020 and beyond
As we embark on a new decade, Canadians are already turning their attention to what the future holds. From concerns around climate change (we searched for climate change 75% more in 2019 than 2015) to how to find a new job and how to start a family, in 2020 Canadians will search for answers to our biggest challenges, together.

A brand new Prime Minister, the Blue Jays epic playoff run, the introduction of Caitlyn Jenner and turmoil in Europe. Our 15th annual Year in Search showcases the Canadians, newsmakers and defining moments that captured our attention this year, as fans, as engaged voters and as global citizens.
Here’s a look back at 2015, through the lens of Google search.

The Year in Search is Google’s annual analysis of trillions of searches performed globally throughout the year. The results include everything from top trending Canadians, sports, music, politics, news, and more.

Top Trending Canadian Searches of 2015:
View all of Canada’s Trending Searches here.
Fandemonium
It’s no surprise that the Toronto Blue Jays landed the top spot in 2015’s Year in Search rankings, dominating Canadian search queries like they did the AL East this past season. From bat flips to “walk the parrot”, the playoff run of 2015 gave us endless opportunities to #comeTOgether. Stricken with baseball fever, Canadians took to Google to find out how they could catch the boys in blue, with questions such as ‘What is the score of the Blue Jays game?’  and ‘How to watch Blue Jays online’ also topping the charts as Canadians celebrated the Blue Jays first playoff berth since 1993.

#Elxn42
Canada’s election dominated news searches this year, with Federal Election, Justin Trudeau and “How to vote” landing in top positions. Our new PM knocked Stephen Harper off the #1 spot of most-searched politicians, and the list of the Top Trending Canadians included not one, not two, but three Trudeaus: Justin, Pierre and Margaret. For the second year in a row, “How to vote” ranked as the top trending ‘How to’ search in Canada.  #elxn42 had the highest voter turnout since 1993, and with such a large and growing number of voters relying on the Internet for their election-related information, the web has become a vital tool for engaging and informing Canada’s electorate.

Global Citizens
The horrific attacks in Paris on November 13th generated significant search interest for “Paris shooting” as Canadians sought details and deeper understanding of what had happened in the French capital.
Paris was also the site of the targeted attack on satirical magazine Charlie Hebdo earlier in the year. Charlie Hebdo was was a top-trending topic in 2015, and had Canadians asking “What is Je Suis Charlie?” as the popular hashtag circulated the globe with messages of support.

Who knew that a petri dish could make an ideal setting for an addictive online game? Developed in April 2015 by 19-year old Brazilian developer Matheus Valadares, Agar.io became a rapidly trending search topic due in large part to fan videos uploaded to YouTube that captured the weirdly compelling world of petri dish competition. The game also found itself part of the Turkish elections that took place this summer. Agar.io is particularly popular in Turkey, and several political parties referenced the game’s imagery in their posters.

The Google Doodle that featured the Penny Black Stamp on May 1st piqued Canadians’ curiosity, and landed “What is a penny black stamp?” at the top of the “What is...” list, which also included questions about major news topics such as ISIS, fentanyl, police carding and MERS.

What we search tells us... a lot about us. And the Year in Search offers a unique reflection of who we were as Canadians in 2015. So before heading into a fresh new year, take a moment to look back and reflect on the year that was at google.ca/2015.
Search on Canada!
Post Content Posted by Aaron Brindle, Public Affairs, Google Canada