Deeplocal is a Pittsburgh-based innovation studio that makes inventions as marketing to help the world's most loved brands tell their stories. The team at Deeplocal built several fun and engaging robotics projects using Android Things. Leveraging the developer ecosystem surrounding the Android platform and the compute power of Android Things hardware, they were able to quickly and easily create robots powered by computer vision and machine learning.

DrawBot is a DIY drawing robot that transforms your selfies into physical works of art.

"The Android Things platform helped us move quickly from an idea, to prototype, to final product. Switching from phone apps to embedded code was easy in Android Studio, and we were able to pull in OpenCV modules, motor drivers, and other libraries as needed. The final version of our prototype was created two weeks after unboxing our first Android Things developer kit."

Want to build your own DrawBot? See the Hackster.io project for all the source code, schematics, and 3D models.

"The Android Things platform made integration work for Handbot a breeze. Using TensorFlow, we were able to train a neural network to recognize hand gestures. Once this was created, we were able to use Android Things drivers to implement games in easy-to-read Android code. In a matter of weeks, we went from a fresh developer kit to competing against a robot hand in Rock, Paper, Scissors."

Want to build your own HandBot? See the Hackster.io project for all the source code, schematics, and 3D models.

Visit the Google Hackster community to explore more inspiring ideas just like these, and join Google's IoT Developers Community on Google+ to get the latest platform updates, ask questions, and discuss ideas.

The next release of Android Things Developer Preview 6 (DP6) is here with lots of new features and bug fixes. Android Things is Google's platform that enables Android Developers to create Internet of Things (IoT) devices with support for powerful applications such as video and audio processing and on-board machine learning with TensorFlow. For the specifics on what is new, visit the release notes. Here are a few of the highlights of what is in DP6.

DP6 includes a new IoT launcher that allows the user to see the current state of the device and change settings using a touch screen or USB input devices. Settings such as configuring the WiFi, finding the build ID, and checking for updates is now something that can be done interactively, making it even easier to get started. This launcher is visible when no other developer-provided IOT_LAUNCHER Activity is present. 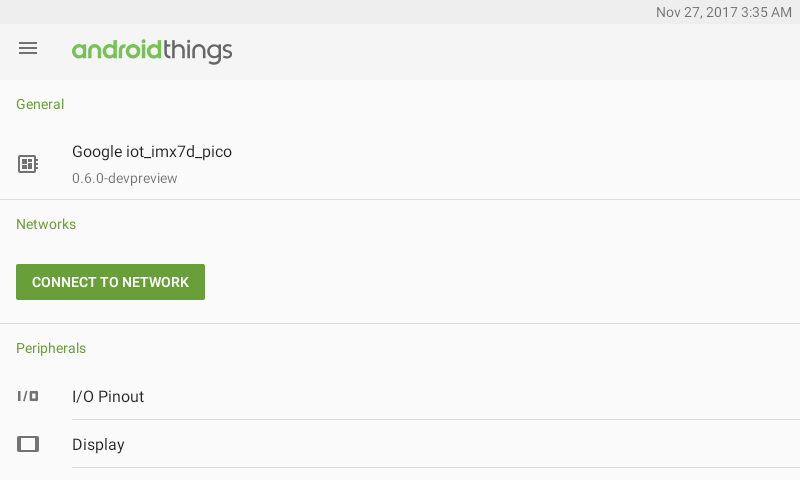 Android Things uses the open-source SwiftShader library, a CPU-based implementation of the OpenGL ES APIs. This enables common OpenGL support across all platforms, even those with no GPU hardware. However, many simple 2D UIs render faster if the drawing is done directly to the framebuffer and OpenGL emulation is not used. In DP6, OpenGL rendering is disabled by default to ensure that most apps run with the fastest UI possible. If you need OpenGL support for 3D rendering, WebView, or TextureView, then explicitly enable it in your AndroidManifest.xml according to the documentation:

DP6 is now based on the latest Android 8.1 developer preview, with API level 27. Most of the standard Android samples now work on DP6. For example, the Camera2Basic sample using the Camera2 API and TextureView now works on both NXP and Raspberry Pi based devices (with the hardwareAccelerated flag set to true). Google Play Services has been updated to support SDK version 11.6, supporting all the latest features.

We heard from developers that flashing and configuring a board using fastboot can be tedious, so the Android Things Console now brings a new and simpler way of flashing device images. Instead of using fastboot and adb commands manually, a new interactive command-line android-things-setup-utility is now provided. This tool makes it much easier to get started with Android Things, and automates the download and flashing process.

DP6 introduces the new partition scheme that will be used for the upcoming production release. Due to the new partition layout, the over-the-air update (OTA) system cannot update existing DP5.1 or earlier devices. Developers will need to go to the Android Things Console, and download and flash a new DP6 build. The Console UI has also been changed for DP6 features, and will only allow you to create new builds based on DP6. If you have any older existing builds, they are still available for download but will not support OTA updates. Developers are encouraged to move all work to DP6.

The interactive IoT launcher shown at boot now includes an I/O pinout section where you can discover the labels of all the pins. The pin naming used by the i.MX7 has been changed, and you should update your code to use this new naming convention. See the i.MX7 documentation for the complete list of pin names. 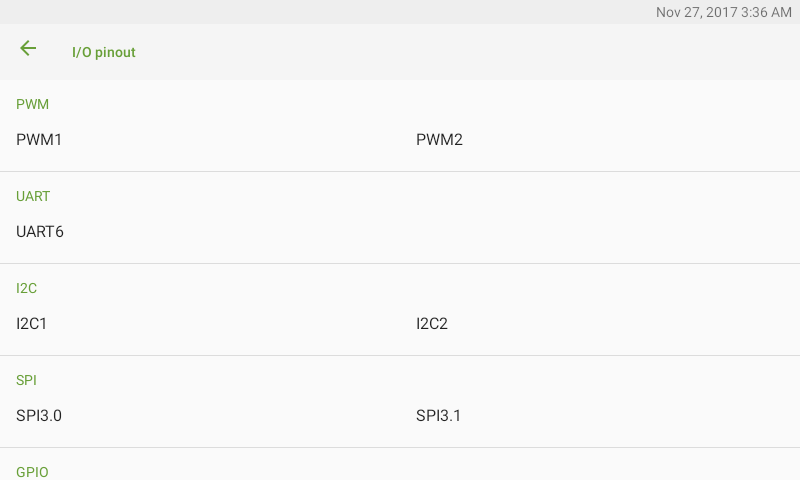 New APIs have been added to Android Things that control the configuration of the local device and device updates. UpdateManager gives developers control over when updates and reboots can be performed, ensuring the device is available for the user when needed. DeviceManager controls factory reset, reboot, and device locales. APIs are also provided for settings such as ScreenManager to control the screen, and TimeManager to control the clock and time zone.

We now provide a command-line tool pio that gives developers access to the Peripheral API via the adb shell. Developers can interactively test GPIO, PWM, UART, I2C, SPI, and future interfaces from an adb shell, which is useful for debugging and automated testing.

DP6 includes significant changes and improvements to the platform. Please send us your feedback by filing bug reports and feature requests, as well as asking any questions on Stack Overflow. To start using DP6, use the Android Things Console to download system images and flash existing devices, or use the android-things-setup-utility. More information about the changes are available in the release notes. You can also join Google's IoT Developers Community on Google+, a great resource to get updates and discuss ideas. Also, we have our new hackster.io community, where everyone can share the amazing projects they have built. We look forward to seeing what you build with Android Things!