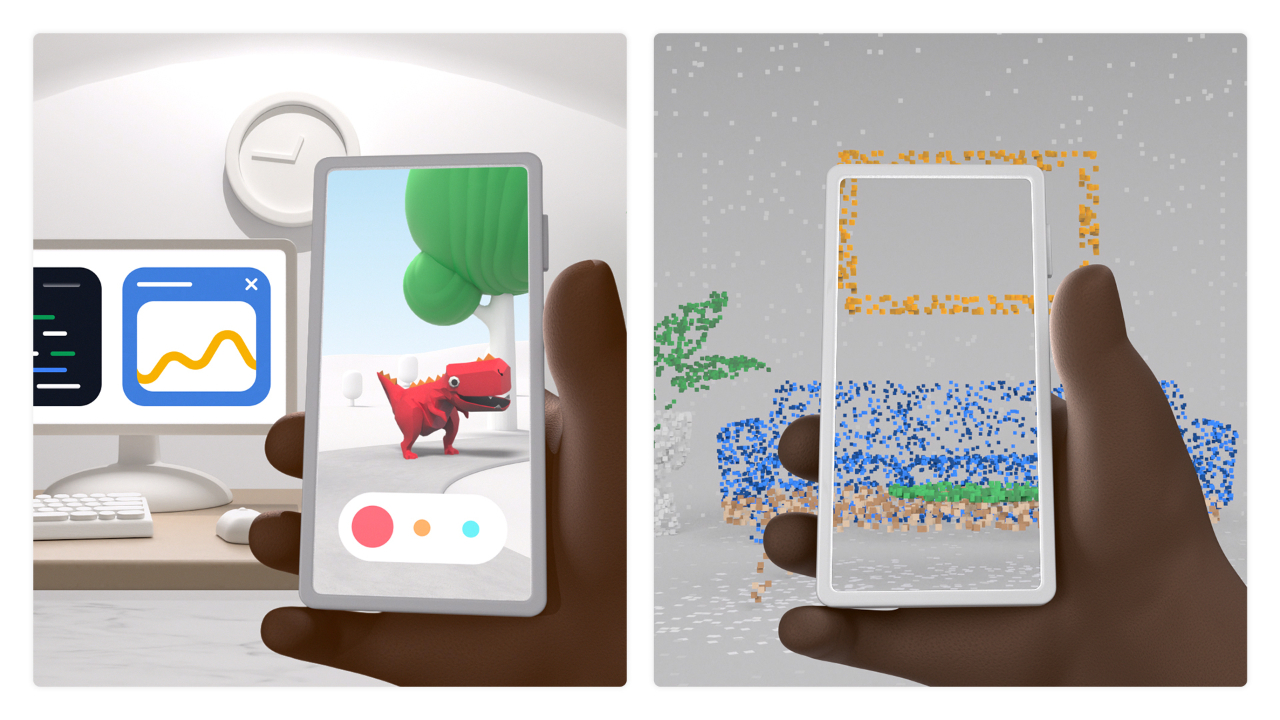 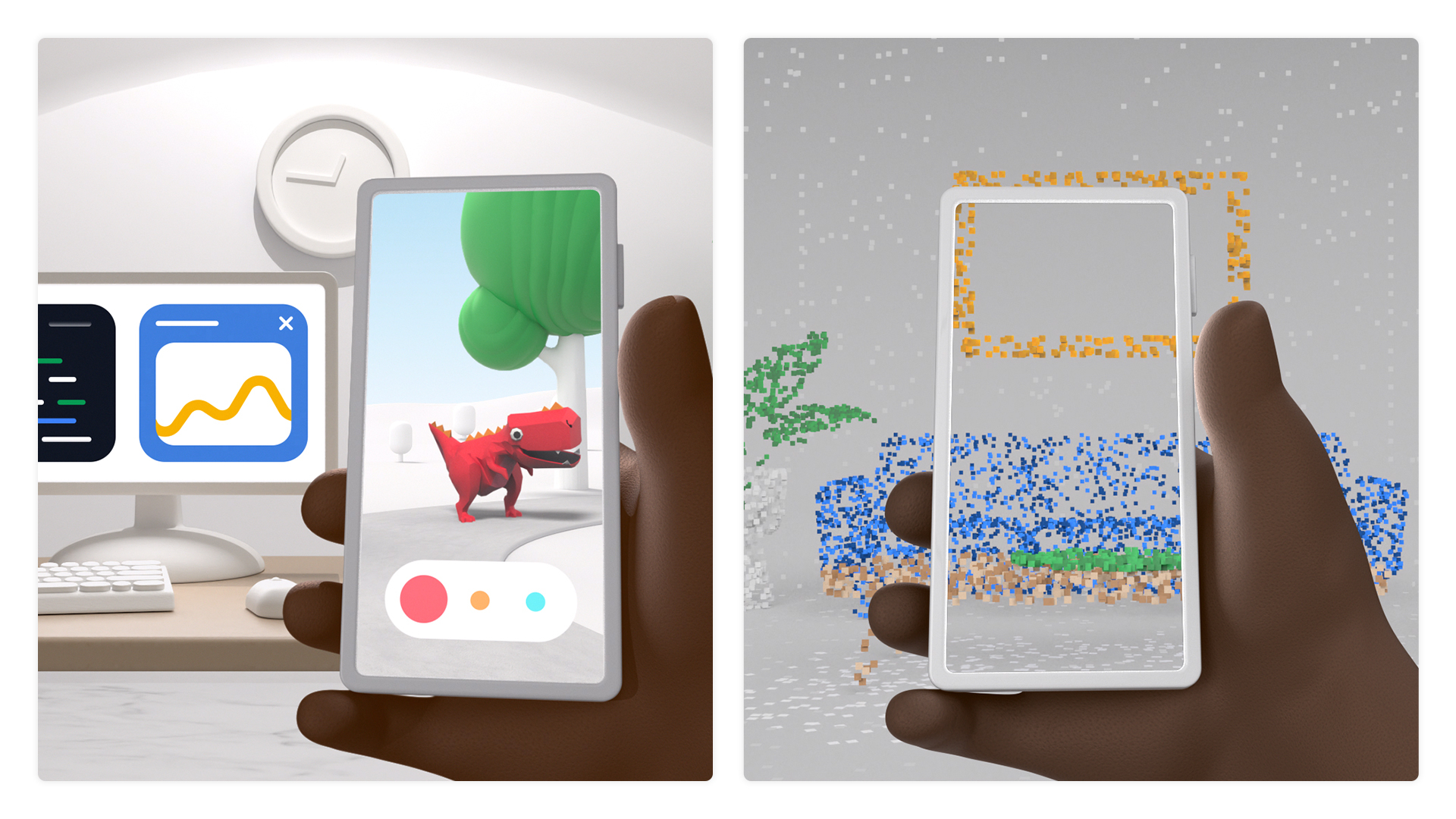 ARCore was created to provide developers with simple yet powerful tools to seamlessly blend the digital and physical worlds. Over the last few years, we’ve seen developers create apps that entertain, engage, and help people in different ways–from letting fans interact with their favorite characters, to placing virtual electronics and furniture for the perfect home setup and beyond.

At I/O this year, we continue on the mission of improving and building AR developer tools. With the launch of ARCore 1.24, we’re introducing the Raw Depth API and the Recording and Playback API. These new APIs will enable developers to create new types of AR experiences and speed up their development cycles.

When we launched the Depth API last year, hundreds of millions of Android devices gained the ability to generate depth maps in real time without needing specialized depth sensors. Data in these depth maps was smoothed, filling in any gaps that would otherwise occur due to missing visual information, making it easy for developers to create depth effects like occlusion.

The confidence image in the Raw Depth API allows developers to filter depth data in real time. For example, TikTok’s newest effect enables users to upload an image and wrap it onto real world objects. The image conforms to surfaces where there is high confidence in the underlying depth estimate. The ability for developers to filter for high confidence depth data is also essential for 3D object and scene reconstruction. This can be seen in the 3D Live Scanner app, which enables users to scan their space and create, edit, and share 3D models.

We’re also introducing a new type of hit-test that uses the geometry from the depth map to provide more hit-test results, even in low-texture and non-planar areas. Previously, hit-test worked best on surfaces with lots of visual features.

The lifeAR app uses this improved hit-test to bring AR to video calls. Users see accurate virtual annotations on the real-world objects as they tap into the expertise of their social circle for instant help to tackle everyday problems.

As with the previous Depth API, these updates leverage depth from motion, making them available on hundreds of millions of Android devices without relying on specialized sensors. Although depth sensors such as time-of-flight (ToF) sensors are not required, having them will further improve the quality of your experiences.

In addition to these apps, the ARCore Depth Lab has been updated with examples of both the Raw Depth API and the depth hit-test. You can find those and more on the Depth API documentation page and start building with Android and Unity today.

A recurring pain point for AR developers is the need to continually test in specific places and scenarios. Developers may not always have access to the location, lighting will change, and sensors won’t catch the exact same information during every live camera session.

The new ARCore Recording and Playback API addresses this by enabling developers to record not just video footage, but also IMU and depth sensor data. On playback, this same data can be accessed, enabling developers to duplicate the exact same scenario and test the experience from the comfort of their workspace.

DiDi used the Recording and Playback API to build and test AR directions in their DiDi-Rider app. They were able to save 25% on R&D and testing costs, 60% on travel costs, and accelerated their development cycle by 6 months.

In addition to increasing developer velocity, recording and playback unlocks opportunities for new AR experiences, such as post-capture AR. Using videos enables asynchronous AR experiences that remove time and place constraints. For instance, when visualizing AR furniture, users no longer have to be in their home. They can instead pull up a video of their home and accurately place AR assets, enabling them to “take AR anywhere”.

VoxPlop! by Nexus Studios is experimenting with the notion of Spatial Video co-creation, where users can reach in and interact with a recorded space rather than simply placing content on top of a video. The Recording and Playback API enables users to record videos, drop in 3D characters and messages, and share them with family and friends.

VoxPlop! by Nexus Studios uses the Recording and Playback API to experiment with Spatial Video co-creation

Learn more and get started with the Recording and Playback API docs.

Get started with ARCore today

These latest ARCore updates round out a robust set of powerful developer tools for creating engaging and realistic AR experiences. With over a billion lifetime installs and 850 million compatible devices, ARCore makes augmented reality accessible to nearly everyone with a smartphone. We're looking forward to seeing how you innovate and reach more users with ARCore. To learn more and get started with the new APIs, visit the ARCore developer website.