The Google Open Source team is currently enjoying summer weather in Sydney at Linux.conf.au, but soon we return to winter weather and head to Brussels for FOSDEM 2018. FOSDEM is a special event, famous for being non-commercial, volunteer-organized, and free to attend. It’s also huge, attracting more than 5,000 attendees.

This year FOSDEM is particularly special as it falls on top of the 20th anniversary of the open source movement and its steward, the Open Source Initiative. (In case you’re wondering, this September will mark the 35th anniversary of the free software movement.) We’re looking forward to celebrating the occasion!

You’ll find us in the hallways, at satellite events, and at our table in the stands area. You’ll also find some Googlers in the conference schedule, as well as folks sharing their experience of the most recent Google Summer of Code and Google Code-in.

If you’d like to say hello or chat, swing by our table in Building K. The highlight of our trip is meeting hundreds of the thousands of students and mentors who have participated in our programs!

Below are the Googlers who will be giving presentations:

Sunday, February 4th
10:20am  Regular Expression Derivatives in Python by Michael Paddon
11:30am   Advocating For FOSS Inside Companies a panel including Max Sills
3:00pm    Your Build in a Datacenter by Jakob Buchgraber
4:00pm    Accelerating Big Data Outside of the JVM by Holden Karau

Hope to see you there!

It’s summer in Sydney and Linux.conf.au (LCA) 2018 is just a week away. LCA, an annual event that attracts people from all over the globe, including Googlers, runs January 22nd to 26th. 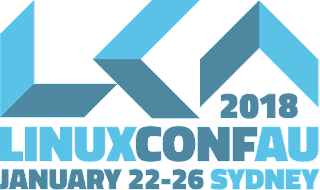 LCA is a cornerstone of the free and open source software (FOSS) community. It’s volunteer-run, administered by Linux Australia, and has been running since 1999. Despite its name, the conference program covers all things FOSS. The event is five days long and includes two days of miniconfs that make the program even more interesting.

The Google Open Source team is escaping “wintery” Northern California and will be hosting a Birds of a Feather (BoF) session and co-hosting an event with GDG Sydney, both focused on our student programs.

A few Googlers ended up with sessions in the program and one is running a miniconf:

Not able to make the conference? They’ll be posting session recordings to YouTube afterwards, thanks in part to students who have worked on TimVideos, a suite of open source software and hardware for recording video, as part of Google Summer of Code.

Naturally, you will also find the Google Open Source team at other upcoming events including FOSDEM. We look forward to seeing you in 2018!

The Google Open Source team is getting ready to hit the road and join the open source panoply that is Open Source Convention (OSCON). This year the event runs May 8-11 in Austin, Texas and is preceded on May 6-7 by the free-to-attend Community Leadership Summit (CLS).

You’ll find our team and many other Googlers throughout the week on the program schedule and in the expo hall at booth #401. We’ve got a full rundown of our schedule below, but you can swing by the expo hall anytime to discuss Google Cloud Platform, our open source outreach programs, the projects we’ve open-sourced including Kubernetes, TensorFlow, gRPC, and even our recently released open source documentation.

Of course, you’ll also find our very own Kelsey Hightower everywhere since he is serving as one of three OSCON program chairs for the second year in a row.
Are you a student, educator, project maintainer, community leader, past or present participant in Google Summer of Code or Google Code-in? Join us for lunch at the Google Summer of Code table in the conference lunch area on Wednesday afternoon. We’ll discuss our outreach programs which help open source communities grow while providing students with real world software development experience. We’ll be updating this blog post and tweeting with details closer to the date.
Without further ado, here’s our schedule of events:
Monday, May 8th (Tutorials)
9:00am   Site reliability engineering by Jean Joswig
1:30pm   Kubernetes hands-on by Kelsey Hightower
Tuesday, May 9th (Tutorials)
1:30pm   Building amazing cross-platform command-line apps in Go by Steve Francia co-presented with Ashley McNamara
Wednesday, May 10th (Sessions)
11:00am  TensorFlow Community Keynote by Yufeng Guo and Amy Unruh
11:50am  The life of a large-scale open source project by Jessica Frazelle
11:50am  What is machine learning by Amy Unruh
12:30pm Google Summer of Code and Google Code-in lunch
4:15pm   From WebSockets to WISH (web in strict HTTP) by Wenbo Zhu
5:05pm   gRPC 101 for Java developers: Building small and efficient microservices by Ray Tsang
5:05pm   Go deep, go wide, go everywhere: Hands-on machine learning with TensorFlow by Yufeng Guo
Thursday, May 11th (Sessions)
9:30am  Half my life spent in open source by Brad Fitzpatrick
4:15pm  Multilayered testing by Alex Martelli
We look forward to seeing you deep in the heart of Texas at OSCON 2017!
By Josh Simmons, Google Open Source

It’s a new year and open source enthusiasts from around the globe are preparing to gather at the edge of the world for Linux.conf.au 2017. Among those preparing are Googlers, including some of us from the Open Source Programs Office.

This year Linux.conf.au is returning to Hobart, the riverside capital of Tasmania, home of Australia’s famous Tasmanian devils, running five days between January 16 and 20. The theme is the “Future of Open Source.”
The conference, which began in 1999 and is community organized, is well equipped to explore that theme which is reflected in the program schedule and miniconfs.

You’ll find Googlers speaking throughout the week, as well as participating in the hallway track. Don’t miss our Birds of a Feather session if you’re a student, educator, project maintainer, or otherwise interested in talking about outreach and student programs like Google Summer of Code and Google Code-in.

Monday, January 16th
12:20pm The Sound of Silencing by Julien Goodwin
4:35pm   Year of the Linux Desktop? by Jessica Frazelle

Not able to make it to the conference? Keynotes and sessions will be livestreamed, and you can always find the session recordings online after the event.

We’ll see you there!

Developers and open source enthusiasts converge on Austin, Texas in just under two weeks for O’Reilly Media’s annual open source conference, OSCON, and the Community Leadership Summit (CLS) that precedes it. CLS runs May 14-15 at the Austin Convention Center followed by OSCON from May 16-19.

This year we have 10 Googlers hosting sessions covering topics including web development, machine learning, devops, astronomy and open source. A list of all of the talks hosted by Googlers alongside related events can be found below.
If you’re a student, educator, mentor, past or present participant in Google Summer of Code or Google Code-in, or just interested in learning more about the two programs, make sure to join us Monday evening for our Birds of a Feather session.

Have questions about Kubernetes, Google Summer of Code, open source at Google or just want to meet some Googlers? Stop by booth #307 in the Expo Hall.

Monday, May 16th
9:00am   Kubernetes: From scratch to production in 2 days by Brian Dorsey and Jeff Mendoza
7:00pm   Google Summer of Code and Google Code-in Birds of a Feather

Tuesday, May 17th
9:00am   Kubernetes: From scratch to production in 2 days by Brian Dorsey and Jeff Mendoza
9:00am   Diving into machine learning through TensorFlow by Julia Ferraioli, Amy Unruh and Eli Bixby