Many schools have told us that Chromebooks have helped them transform learning. Those in Texas and North Carolina have shared stories of students using Chromebooks to better connect with their teachers and peers and expand their learning opportunities (you’ll see more stories in the coming weeks from districts in New York, Florida and Michigan). But beyond opening new avenues for learning, Chromebooks are also helping schools save money, allowing them to meet tight budgets and provide computers to more students.

Plymouth-Canton Community Schools — one of the largest districts in Michigan — for example, told us that they’ve been able to save $200k in the 3rd grade alone, by purchasing Chromebooks over alternative devices. They've been able to leverage those savings to purchase charging carts, protective cases for the devices and additional power adaptors so that students can charge the Chromebooks at home and at school. The same has been true outside of the US. Earlier this year, Academies Enterprise Trust, a network of 76 schools across the United Kingdom, anticipated that they could save £7.7m in hardware and maintenance costs by using Google Apps for Education and Chromebooks.

To more fully understand the total cost of ownership and savings impact of Chromebooks, we commissioned IDC to conduct interviews with 10 schools using Chromebooks to support teaching and learning in 7 countries. The study comprised of 10 schools in 7 countries representing 294,620 students in all, across United States, Canada, United Kingdom, Sweden, Denmark, Australia and New Zealand. The interviews consisted of a variety of quantitative and qualitative questions designed to obtain information about the economics of deploying Chromebooks for these school systems as well as the impact of using Chromebooks on their students and faculty. Some of their key findings: 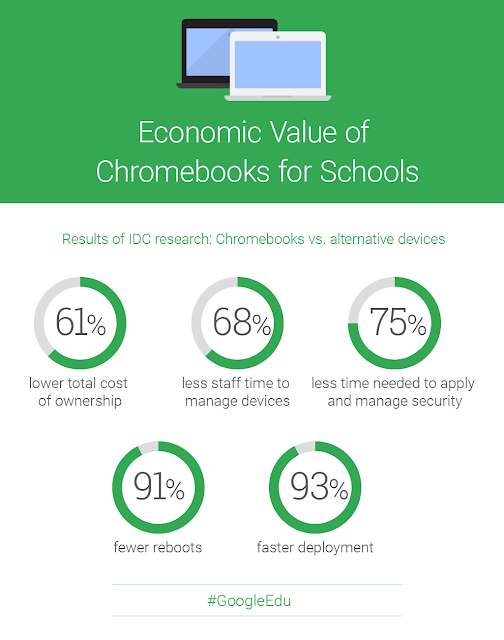 According to one school district in the study, Chromebook’s price point enabled the school system to reach a 1:1 user-device ratio, something it couldn’t have done before given the cost of their previous devices. They said, “We now have a 1:1 device solution with Chromebooks … Without Chromebooks, either we would have fewer devices or we would have had to spend four times as much to get to the same point.” For this district, being able to expand the number of students who have daily or consistent access to educational content on Chromebooks represents a substantial advantage and supports their core missions.

You can read the full whitepaper here, and calculate how much time and money Chromebooks can save for your school.