At Google I/O 2017, we announced a redesign of the Android TV's home screen. We expanded the recommendation row concept so that each app can have its own row (or multiple rows) of content on the home screen. Since the release of the new home screen, we have seen increased adoption of the new recommendation channels for Android Oreo in a wide variety of apps.

With more and more apps surfacing high-quality recommendations using the new channels, the legacy recommendation row in the new home screen on Android O will be phased out over the next year.

Currently, when an app creates recommendations with the legacy notification based API the content is added to a channel for that app. The channel may already exist if there was recommended content for it when you upgraded from Android N (or below). If the there is no channel for the app, it will be automatically generated for you. In either case, the user can't add or remove programs from the channel, but they can move, hide, and show the channel. When an app starts to use the new API to add its own channels, the system removes the auto-generated channel and the app takes over control of the display of their content. 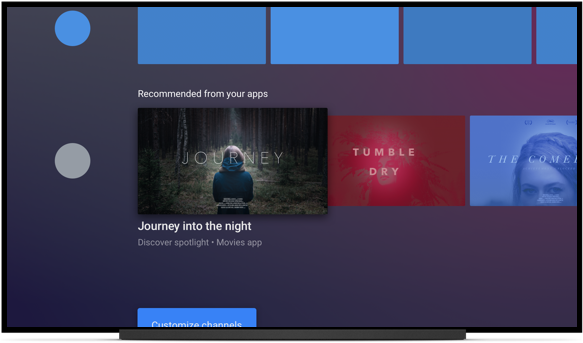 If you have not updated your app to post content to the new channels on the home screen, take a look at our documentation, codelab, and sample to get started.

We look forward to more and more apps taking advantage of the new changes in the home screen. We love to hear your feedback, so please visit the Android TV Developer Community on G+ to share your thoughts and ideas.