During our recent talk at Android Dev Summit, we discuss the state of testing on Android on the example of a simple Notes application that we created as part of our testing codelab. In one section of the talk, we discuss the problem of test flakiness and introduce a simple solution for setting up a hermetic testing environment.

UI tests with frameworks like Espresso or UI Automator can easily get flaky if the application has external dependencies that can sometimes fail or take long to respond. In short, flaky tests are tests that are not reliable (they can pass or fail randomly) which defeats the whole purpose of having tests in the first place.

A common solution to this problem is hermetic testing or, in other words, making sure that your tests are isolated from dependencies. Using fake implementations or fake servers that just return predefined data is a common way of dealing with this problem. Here are some good examples:

Dependency Injection (DI) is a software design pattern that facilitates testing, reusing modules and making them interchangeable. DI frameworks can help you deal with the boilerplate associated with this pattern but it can take a considerable amount of time to set them up and understand how they work. Before you are ready to commit to one of those frameworks for your app, you might want to explore an easier way, especially if your project requirements are simple.

Product flavors is a powerful feature of Android Studio and our Android Gradle plugin that lets you swap Java classes at compile time and doesn't require additional libraries. Some typical examples of flavor dimensions are:

We can leverage the same mechanism to create two separate versions of our app to help with hermetic testing:

The procedure is very simple: 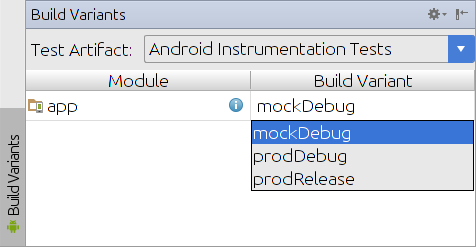 Note: In gradle, the task names change when you add flavors. Instead of installDebug, you will now have to choose installProdDebug or installMockDebug.

With the prod and mock flavors configured and your mock implementation in place, you can now use the following gradle tasks to choose how your tests should run:

You can refer to our Android Testing Codelab to see how we used this method to provide different Injection class implementations, the one in prod providing real data and the other (mock) serving fake dependencies that use fake data for isolated test execution.

When you’re happy with your hermetic setup, you might want to give more flexibility to your build process and add even more dimensions to be able to interchange different components in your app. While the method discussed above is suitable for simple projects, for more complex situations it would be much better to invest some time to learn about and add a Dependency Injection framework to your project.