Introduced in May 2015, App Invites is an out-of-the-box solution for conducting app referrals and encouraging sharing. So far, we’ve seen very positive results on how the feature improves app discovery. While 52 percent of users discover apps by word of mouth, we have seen 92 percent of users trust recommendations from family and friends with App Invites. In this post, we’ll share some success stories from companies that have already used App Invites to grow their user base.

Fabulous is a research-based app incubated in Duke University's Center for Advanced Hindsight. The app helps users to embark on a journey to resetting poor habits, replacing them with healthy rituals, with the ultimate goal of improving health and well-being.

Users started taking advantage of App Invites within the app to share their experience with their friends and family. App Invites installs now account for 60 percent of all Fabulous installs via referrals. Sharing clicks also increased by 10 percent once App Invites were used. Fabulous also noticed increased user retention, with 2x the Life Time Value of the app for users that came in to it via App Invites. Fabulous simplified their user experience, combining SMS and email into a single interface, allowing users to focus on sharing.

Additionally, users that were acquired via App Invites versus other channels were found to be twice as likely to stay with the app.

CTO of Fabulous, Amine Laddhari, commented, “It took me only a few hours to implement App Invites versus several days of work when we built our own solution. It was straightforward!”

You can view the full case study from Fabulous here. 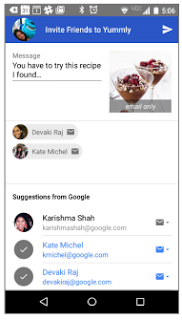 Yummly, a food discovery platform that views cooking a meal as a personalized, shareable experience wanted to expand its user base and generate awareness on the Android platform. It added App Invites so that users could recommend the app to their family and friends, giving functionality to share specific recipes, dinner ideas or shipping lists.

With App invites, they found that installation rates were about 60 percent higher compared to other sharing channels. Additionally, Yummly was able to take advantage of the seamless integration of Google Analytics. It’s the only share channel that has this integration, allowing data such as the number of invites sent, accepted and resulting installs to be accurately tracked.

You can view the full case study from Yummly here.

App Invites is available for Android or iOS, and you can learn how you can build it into your own apps at g.co/appinvites.