With mobile gamers across 190 countries, Google Play Games is made up of a vibrant and diverse gaming community. And these players are more engaged than ever. Over the past year, the number of games reaching over 1 million installs grew by 50 percent.

Today, at our annual Developer Day at the Game Developers Conference, we announced new platform and ads tools for developers, of all sizes reach, to reach this global audience and accelerate the growth of their games business. Check out below the full range of features that will help game developers build their apps, grow their users base, and earn more revenue.

In February, we introduced Gamer IDs so that anyone could create a gaming persona. We also simplified the sign-in process for Google Play Games so players could pick up playing their game more quickly. We’re also working on product enhancements to make Play Games a little more social and fun, which will mean more engaged players who’re playing your game for longer. One example is the launch of Gamer friends (coming soon!), where your players can add and interact with their friends from within the Google Play Games app (without needing a Google+ account).

We’re also launching the Indie Corner, a new collection on Google Play, that will highlight amazing games built by indie developers. You can nominate your awesome indie game for inclusion at g.co/indiecornersubmission. We’ll pick the best games to showcase based on the quality of the experience and exemplary use of Google Play game services.

In January, we added features to Player Analytics, the free reporting tool of Google Play game services, which helps you understand how players are progressing, spending and churning. Today, we previewed some upcoming new tools that would be available in the coming months, including: 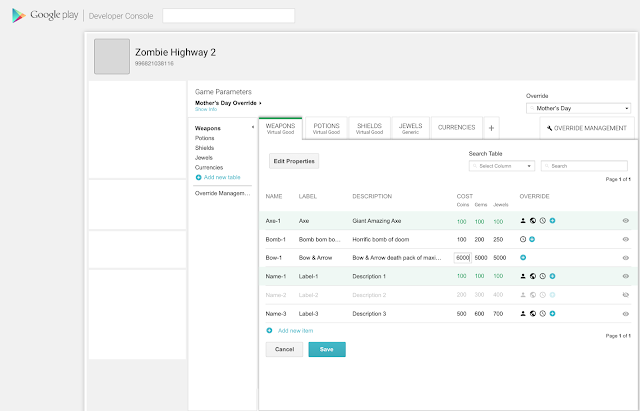 “Not showing ads to users that were probable to spend increased number of IAP transactions by 15%.” – Avetis Zakharyan, CEO Underwater Apps

Earn more revenue in your game with AdMob

AdMob helps game developers around the world maximize revenue through in-app advertising. At GDC, we also announced a new way to help you earn more through AdMob Mediation. Rewarded advertising is a popular form of game monetization -- users are given the choice to engage with ads in exchange for an in-app reward. AdMob Mediation will enable you to easily monetize your apps with rewarded video ads from a number of ad providers. Supported networks and platforms include AdColony, AppLovin, Chartboost, Fyber, Upsight and Vungle, with more being added all the time.

You can learn more about this, and all our ads announcements on the Inside AdWords blog.

This is just the start of what we’ve got planned for 2016. We hope you can make use of these tools to improve your game, engage your audience, and grow your business and revenue.