Earlier this year, research from Google showed that nearly half of all display and video ads were not viewable. This has helped move forward the ongoing industry discussions around shifting digital ad buys from served impressions to viewable impressions. Simultaneously, advertiser demand for 100% viewable impressions, where advertisers only pay publishers for impressions that are viewable based on the current industry standard as defined by the MRC, has continued to grow.

To help publishers tackle this complex issue, we partnered with experts from The Washington Post and Forbes along with the DoubleClick for Publishers and Active View teams at Google to create an educational case study that surfaces key issues publishers should consider as they respond to RFPs for 100% viewable impressions.

The illustrative scenario in the case study walks through how a sales director at the fictional publisher, The Hourly Report, responds to a RFP from the fictional advertiser, Eh-Okay, for a commitment to provide 100% viewable impressions. The case study references two fictional viewability measurement technologies, Ad Chemist and Bridge, along with Google’s Active View solution, to represent the fact that there’s more than one way for advertisers and publishers to measure viewability.

We’re strong believers that the viewability discussion should be just a starting point for publishers and advertisers: understanding whether an ad had a chance to be seen is the first step on the path to ultimately being able to measure whether it had impact. Adopting a single industry standard for viewability - like the MRC defined standard that Google supports - is a critical first step along the path to transacting media exclusively based on viewable impressions. 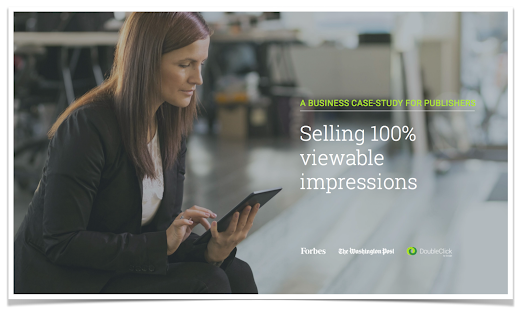