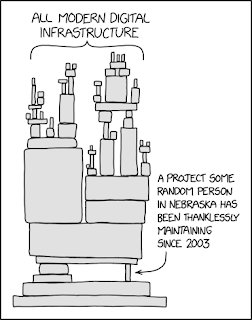 Open source software (OSS) has long suffered from a "tragedy of the commons" problem. Most organizations, large and small, make use of open source software every day to build modern products, but many OSS projects are struggling for the time, resources and attention they need. This is a resource allocation problem and Google, as part of Open Source Security Foundation (OpenSSF), can help solve it together. We need ways to connect critical open source projects we all rely on, with organizations that can provide them with adequate support.
Criticality of an open source project is difficult to define; what might be a critical dependency for one consumer of open source software may be entirely absent for another. However, arriving at a shared understanding and framework allows us to have productive conversations about our dependencies. Simply put, we define criticality to be the influence and importance of a project.

In order for OpenSSF to fund these critical open source projects, they need to be identified first. For this purpose, we are releasing a new project - “Criticality Score” under the OpenSSF. Criticality score indicates a project’s criticality (a number between 0 and 1) and is derived from various project usage metrics in a fully automated way. Our initial evaluation metrics include a project’s age, number of individual contributors and organizations involved, user involvement (in terms of new issue requests and updates), and a rough estimate of its dependencies using commit mentions. We also provide a way to add your own metric(s). For example, you can add internal project usage data to re-adjust a project's criticality score for individualized prioritization needs.

Identifying these critical projects is only the first step in making security improvements. OpenSSF is also exploring ways to provide maintainers of these projects with the resources they need. If you're a maintainer of a critical software package and are interested in getting help, funding, or infrastructure to run your project, reach out to the OpenSSF’s Securing Critical Projects working group here.

Check out the Criticality Score project on GitHub, including a list of critical open source projects. Though we have made some progress on this problem, we have not solved it and are eager for the community’s help in refining these metrics to identify critical open source projects.
By Abhishek Arya, Kim Lewandowski, Dan Lorenc and Julia Ferraioli – Google Open Source