With the release of Google Play services 7.8, we announced the addition of new Mobile Vision APIs, which includes a new Face API that finds human faces in images and video better and faster than before. This API is also smarter at distinguishing faces at different orientations and with different facial features facial expressions.

Face Detection is a leap forward from the previous Android FaceDetector.Face API. It’s designed to better detect human faces in images and video for easier editing. It’s smart enough to detect faces even at different orientations -- so if your subject’s head is turned sideways, it can detect it. Specific landmarks can also be detected on faces, such as the eyes, the nose, and the edges of the lips.

When the API detects a human face, it is returned as a Face object. The Face object provides the spatial data for the face so you can, for example, draw bounding rectangles around a face, or, if you use landmarks on the face, you can add features to the face in the correct place, such as giving a person a new hat.

The Face API is smart enough to detect faces in multiple orientations. As the head is a solid object that is capable of moving and rotating around multiple axes, the view of a face in an image can vary wildly.

Here’s an example of a human face, instantly recognizable to a human, despite being oriented in greatly different ways: 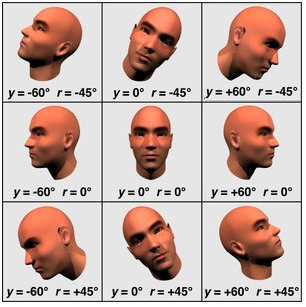 The API is capable of detecting this as a face, even in the circumstances where as much as half of the facial data is missing, and the face is oriented at an angle, such as in the corners of the above image.

Here are the method calls available to a face object:

A landmark is a point of interest within a face. The API provides a getLandmarks() method which returns a List, where a Landmark object returns the coordinates of the landmark, where a landmark is one of the following: Bottom of mouth, left cheek, left ear, left ear tip, left eye, left mouth, base of nose, right cheek, right ear, right ear tip, right eye or right mouth. 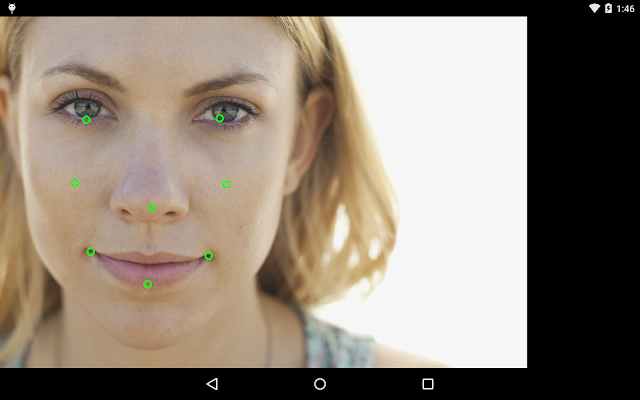 In addition to detecting the landmark, the API offers the following function calls to allow you to smartly detect various facial states:

Thus, for example, you could write an app that only takes a photo when all of the subjects in the image are smiling. 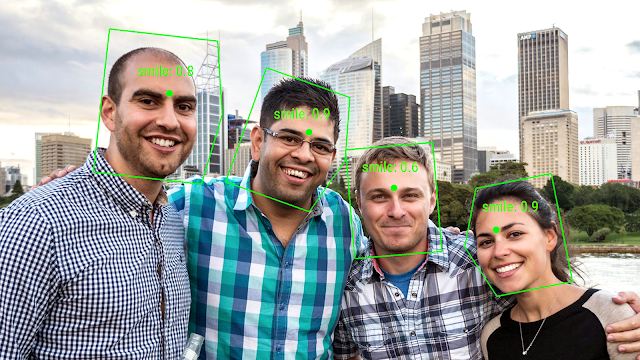 It’s easy to build applications that use facial detection using the Face API, and we’ve provided lots of great resources that will allow you to do so. Check them out here: