In our paper “DeepNull models non-linear covariate effects to improve phenotypic prediction and association power,” we proposed a new method, DeepNull, to model the complex relationship between covariate effects on phenotypes to improve Genome-wide association studies (GWAS) results. We have released DeepNull as open source software, with a Colab notebook tutorial for its use.

Each individual’s genetic data carries health information such as why certain individuals have a lower risk of developing skin cancer compared to others or why certain drugs differ in effectiveness between individuals. Genetic data is encoded in the human genome—a DNA sequence—composed of a 3 billion long chain built from four possible nucleotides (A, C, G, and T). Only a small subset of the genome (~4-5 million positions) varies between two individuals. One of the goals of genetic studies is to detect variants that are associated with different phenotypes (e.g., risk of diseases such as Glaucoma or observed phenotypic values such as high-density lipoprotein (HDL), low-density lipoproteins (LDL), height, etc).

GWAS are used to associate genetic variants with complex traits and diseases. To more accurately determine an association strength between genotype and phenotype, the interactions between phenotypes (such as age and sex) and principal components (PCs) of genotypes, must be adjusted for as covariates. Covariate adjustment in GWAS can increase precision and correct for confounding. In the linear model setting, adjustment for a covariate will improve precision (i.e., statistical power) if the distribution of the phenotype differs across levels of the covariate. For example, when performing GWAS on height, males and females have different means. All state of the art methods (e.g., BOLT-LMM, regenie) perform GWAS assuming that the effect of genotypes and covariates to phenotype is linear and additive. However, we know that the assumption of linear and additive contributions of covariates often does not reflect underlying biology, so we sought a method to more comprehensively model and adjust for the interactions between phenotypes for GWAS.

We proposed a new method, DeepNull, to relax the linear assumption of covariate effects on phenotypes. DeepNull trains a deep neural network (DNN) to predict phenotype using all covariates in a 5-fold cross-validation. After training the DeepNull model, we make phenotype predictions for all individuals and add this prediction as one additional covariate in the association test. Major advantages of DeepNull are its simplicity to use and that it requires only a minimal change to existing GWAS pipeline implementations. In other words, to use DeepNull, we just need to add one additional covariate, which is computed by DeepNull, to the existing pipeline to perform GWAS. 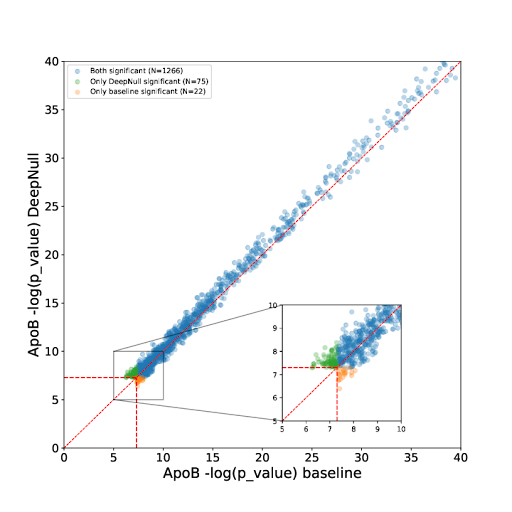 We proposed a new framework, DeepNull, that can model the nonlinear effect of covariates on phenotypes when such nonlinearity exists. We show that DeepNull can substantially improve phenotype prediction. In addition, we show that DeepNull achieves results similar to a standard GWAS when the effect of covariate on the phenotype is linear and can significantly outperform a standard GWAS when the covariate effects are nonlinear. DeepNull is open source and is available for download from GitHub or installation via PyPI.
By Farhad Hormozdiari and Andrew Carroll – Genomics team in HealthAI

This blog summarizes the work of the following Google contributors, who we would like to thank: Zachary R. McCaw, Thomas Colthurst, Ted Yun, Nick Furlotte, Babak Alipanahi, and Cory Y. McLean. In addition, we would like to thank Alkes Price, Babak Behsaz, and Justin Cosentino for their invaluable comments and suggestions.