Building a decent text-to-speech (TTS) voice for any language can be challenging, but creating one – a good, intelligible one – for a low resource language can be downright impossible. By definition, working with low resource languages can feel like a losing proposition – from the get go, there is not enough audio data, and the data that exists may be questionable in quality. High quality audio data, and lots of it, is key to developing a high quality machine learning model. To make matters worse, most of the world’s oldest, richest spoken languages fall into this category. There are currently over 300 languages, each spoken by at least one million people, and most will be overlooked by technologists for various reasons. One important reason is that there is not enough data to conduct meaningful research and development.

Project Unison is an on-going Google research effort, in collaboration with the Speech team, to explore innovative approaches to building a TTS voice for low resource languages – quickly, inexpensively and efficiently. This blog post will be one of several to track progress of this experiment and to share our experience with the research community at large – our successes and failures in a trial and error, iterative approach – as our adventure plays out.

One of the most critical aspects of building a TTS system is acquiring audio data. The traditional way to do this is in a professional recording studio with a voice talent, sound engineer and a voice director. The process can take considerable time and can be quite expensive. People often mistake voice talent work to be similar to a news reader, but it is highly specialized and the work can be very difficult.

Such investments in time and money may yield great audio, but the catch is that even if you’ve created the best TTS voice from these recordings, at best it will still sound exactly like the voice talent - the person who provided the raw audio data. (We’ve read the articles about people who have fallen for their GPS voice to find that they are real people with real names.) So the interesting problem here from a research perspective is how to create a voice that sounds human but is not identifiable as a singular person.

Crowd-sourcing projects for automatic speech recognition (ASR) for Google Voice Search had been successful in the past, with public volunteers eager to participate by providing voice samples. For ASR, the objective is to collect from a diversity of speakers and environments, capturing varying regional accents. The polar opposite is true of TTS, where one unique speaker, with the standard accent and in a soundproof studio is the basic criteria.

Many years ago, Yannis Agiomyrgiannakis, Digital Signal Processing researcher on the TTS team in Google London, wrote a “manifesto” for acoustic data collection for 2000 languages. In his document, he gave technical specifications on how to convert an average room into a recording studio. Knot Pipatsrisawat, software engineer in Google Research for Low Resource Languages, built a tool that we call “ChitChat”, a portable recording studio, using Yannis’ specifications. This web app allows users to read the prompt, playback the recording and even assess the noise level of the room. 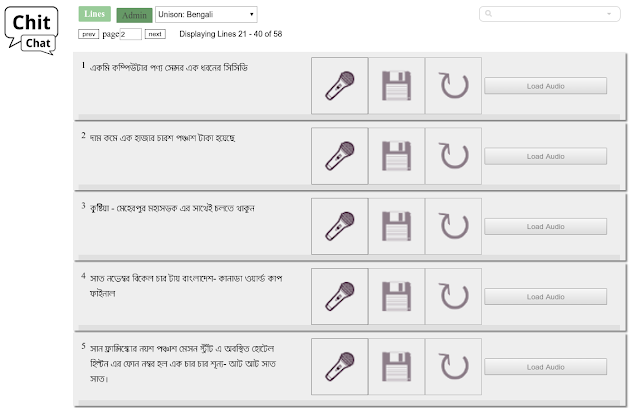 From other past research in ASR, we knew that the right tool could solve the crowd sourcing problem. ChitChat allowed us to experiment in different environments to get an idea of what kind of office space would work and what kind of problems we might encounter. After experimenting with several different laptops and tablets, we were able to find a computer that recognized the necessary peripherals (the microphone, USB converter, and preamp) for under $2,000 – much cheaper than a recording studio!

Now we needed multiple speakers of a single language. For us, it was a no-brainer to pilot Project Unison with Bangladeshi Googlers, all of whom are passionate about getting Google products to their home country (the success of Android products in Bangladesh is an example of this). Googlers by and large are passionate about their work and many offer their 20% time as a way to help, to improve or to experiment on something that may or may not work because they care. The Bangladeshi Googlers are no exception. They embodied our objectives for a crowdsourcing innovation: out of many, we could achieve (literally) one voice.

With multiple speakers, we would target speakers of similar vocal profiles and adapt them to create a blended voice. Statistical parametric synthesis is not new, but the advances in recent technology have improved quality and proved to be a lightweight solution for a project like ours.

In May of this year, we auditioned 15 Bangaldeshi Googlers in Mountain View. From these recordings, the broader Bangladeshi Google community voted blindly for their preferred voice. Zakaria Haque, software engineer in Machine Intelligence, was chosen as our reference for the Bangla voice. We then narrowed down the group to five speakers based on these criteria: Dhaka accent, male (to match Zakaria’s), similarity in pitch and tone, and availability for recordings. The original plan of a spectral analysis using PRAAT proved to be unnecessary with our limited pool of candidates.

All 5 software engineers – Ahmed Chowdury, Mohammad Hossain, Syeed Faiz, Md. Arifuzzaman Arif, Sabbir Yousuf Sanny – plus Zakaria Haque recorded over 3 days in the anechoic chamber, a makeshift sound-proofed room at the Mountain View campus just before Ramadan. HyunJeong Choe, who had helped with the Korean TTS recordings, directed our volunteers.
ChitChat allowed us to troubleshoot on the fly as recordings could be monitored from another room using the admin panel. In total, we recorded 2000 Bangla and English phrases mined from Wikipedia. In 30-60 minute intervals, the participants recorded over 250 sentences each.

In this session, we discovered an issue: a sudden drop in amplitude at high frequencies in a few recordings. We were worried that all the recordings might have to be scrapped.
Another challenge was that we didn’t have a pronunciation lexicon for Bangla as spoken in Bangladesh. We worked initially with the publicly available TTS data from the Indian Institute of Information Technology, but this represented the variant of Bangla spoken in West Bengal (India), which differs from the speech we recorded. Our internally designed pronunciation rules for Bengali were also aimed at West Bengal and would need to be revised later.

Deciding to proceed anyway, Alexander Gutkin, Speech software engineer and lead for TTS for Low Resource Languages in Google London, built an initial prototype voice. Using the preliminary text normalization rules created by Richard Sproat, Speech and Language Processing researcher, the first voice we attempted proved to be surprisingly good. The problem in the high frequencies we had seen in the recordings is undetectable in the parametric voice.
When we return to the sound studio to record an additional 200 longer sentences, we plan to try an upgrade of the USB converter. Meanwhile, Martin Jansche, Natural Language Understanding software engineer, has worked with a team of native speakers on a pronunciation and lexicon and model that better matches the phonology of colloquial Bangladeshi Bangla. Alexander will use the additional recordings and the new pronunciation dictionary to build the second version.

NEXT UP: Building a parametric voice with multiple speaker data (Ep.2)