[Editor’s note: As much as we’d love to host all your workloads on Google Cloud Platform (GCP), sometimes it’s not in the cards. Today we hear from Cloudflare about how to enable a multi-cloud configuration using its load balancer to front Kubernetes-based workloads in both Google Kubernetes Engine and Amazon Web Services (AWS).]

One of the great things about container technology is that it delivers the same experience and functionality across different platforms. This frees you as a developer from having to rewrite or update your application to deploy it on a new cloud provider—or lets you run it across multiple cloud providers. With a containerized application running on multiple clouds, you can avoid lock-in, run your application on the cloud for which it’s best suited, and lower your overall costs.

If you’re using Kubernetes, you probably manage traffic to clusters and services across multiple nodes using internal load-balancing services, which is the most common and practical approach. But if you’re running an application on multiple clouds, it can be hard to distribute traffic intelligently among them. In this blog post, we show you how to use Cloudflare Load Balancer in conjunction with Kubernetes so you can start to achieve the benefits of a multi-cloud configuration.

The load balancers offered by most cloud vendors are often tailored to a particular cloud infrastructure. Load balancers themselves can also be single points of failure. Cloudflare’s Global Anycast Network comprises 120 data centers worldwide and offer all Cloudflare functions, including Load Balancing, to deliver speed and high availability regardless of which clouds your origin servers are hosted on. Users are directed to the closest and most suitable data center to the user, maximizing availability and minimizing latency. Should there be any issue connecting to a given datacenter, user traffic is automatically rerouted to the next best available option. It also health-checks your origins, notifying you via email if one of them is down, while automatic failover capabilities keep your services available to the outside world.

By running containerized applications across multiple clouds, you can be platform-agnostic and resilient to major outages. Cloudflare represents a single pane of glass to: 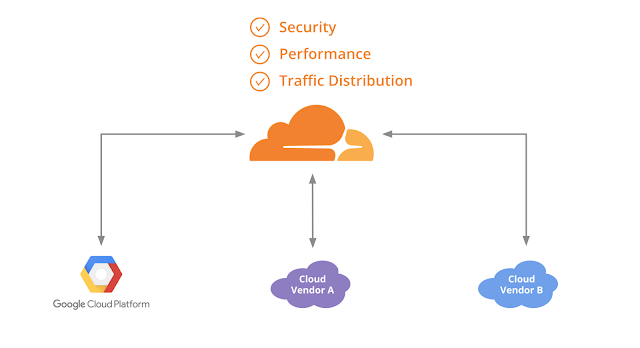 Load balancing across AWS and GCP with Cloudflare


To give you a better sense of how to do this, we created a guide on how to deploy an application using Kubernetes on GCP and AWS along with our Cloudflare Load Balancer.

The following diagram shows how the Cloudflare Load Balancer distributes traffic between Google Cloud and another cloud vendor for an application deployed on Kubernetes. In this example, the GCP origin server uses an ingress controller and an HTTP load balancer, while another cloud vendor origin its uses own load balancer. The key takeaway is that Cloudflare Load Balancer works with any of these origin configurations. 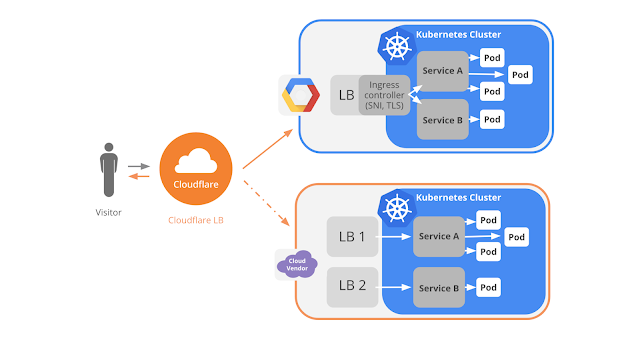 Here's an overview of how to set up a load-balanced application across multiple clouds with Cloudflare.


GCP provides built-in support for running Kubernetes containers with Google Kubernetes Engine. You can access it with Google Cloud Shell, which is preinstalled with gcloud, docker and kubectl command-line tools. Running the following command creates a three-node cluster:


Now you have a pool of Compute Engine VM instances running Kubernetes.


AWS recently announced support for the Kubernetes container orchestration system on top of its Elastic Container Service (ECS). Click Amazon EKS to sign up for the preview.


Then, run the following command to create the cluster in AWS:


Kops then creates one master node and two slaves. This is the default config for Kops.

This step is the same across both Kubernetes Engine and AWS. After you create a cluster, use kubectl to deploy applications to the cluster. You can usually deploy them from a docker image.


This creates a pod that is scheduled to one of the slave nodes.

Step 3 - Expose your application to the internet


On AWS, exposing an application to traffic from the internet automatically assigns an external IP address to the service and creates an AWS Elastic Load Balancer.

On GCP, however, containers that run on Kubernetes Engine are not accessible from the internet by default, because they do not have external IP addresses by default. With Kubernetes Engine, you must expose the application as a service internally and create an ingress resource with the ingress controller, which creates an HTTP(S) load balancer.

To expose the application as a service internally, run the following command:

Once you’ve deployed the ingress resource, the ingress controller that's running in your cluster creates an HTTP(S) Load Balancer to route all external HTTP traffic to the service.

Step 4 - Scale up your application


Adding additional replicas (pods) is the same for both Kubernetes Engine and AWS. This step ensures there are identical instances running the application.

The Load Balancer that was provisioned in the previous step now starts routing traffic to these new replicas automatically. 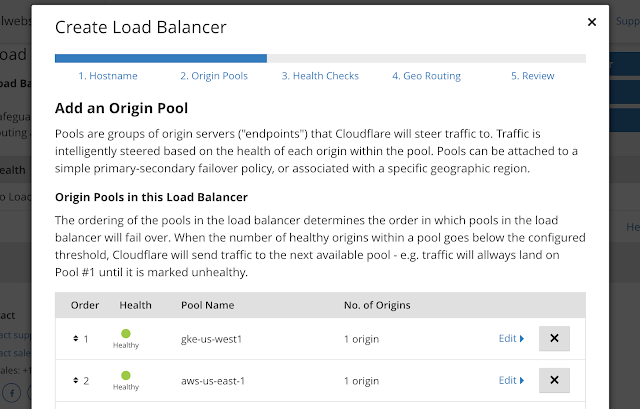 Please see our documentation for detailed instructions how to set up the Cloudflare Load Balancer. 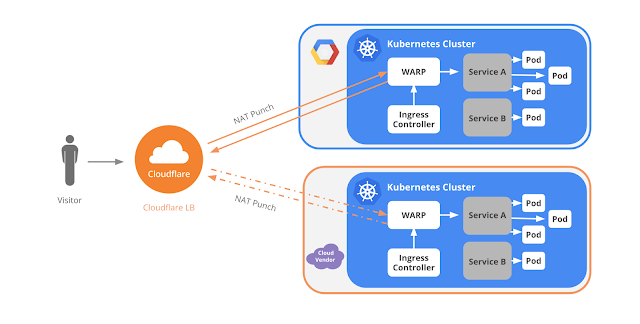 Kubernetes in a multi-cloud world


With the recent announcement of native Kubernetes support in AWS, as well as existing native support in GCP and Microsoft Azure, it’s clear that Kubernetes is emerging as the leading technology for managing heterogeneous cloud workloads, giving you a consistent way to deploy and manage your applications regardless of which cloud provider they run on. Using Cloudflare Load Balancer in these kinds of multi-cloud configurations lets you direct traffic between clouds, while avoiding vendor-specific integrations and lock-in. To learn more about Cloudflare, visit our website, or reach out to us with any questions — we’d love to hear from you!