Containers are all the rage right now. There are scores of best practices papers and tutorials out there, and "Intro to Containers" sessions at just about every conference even tangentially related to cloud computing. You may have read through the Docker docs, launched an NGINX Docker container, and read through Miles Ward’s Introduction to containers and Kubernetes piece. Still, containers can be a hard concept to internalize, especially if you have an existing application that you’re considering containerizing.

To help you through this conceptual hurdle, I’ve written a four-part series of blog posts that gives you a hands-on introduction to building, updating, and using containers for something familiar: running a Minecraft server. You can check them out here:


In the first part of the series, you’ll learn how to create a container image that includes everything a Minecraft server needs, use that image on Google Compute Engine to run the server, and make it accessible from your Minecraft client. You’ll use the Docker command-line tools to build, test, and run the container, as well as to push the image up into the Google Container Registry for use with a container-optimized instance. 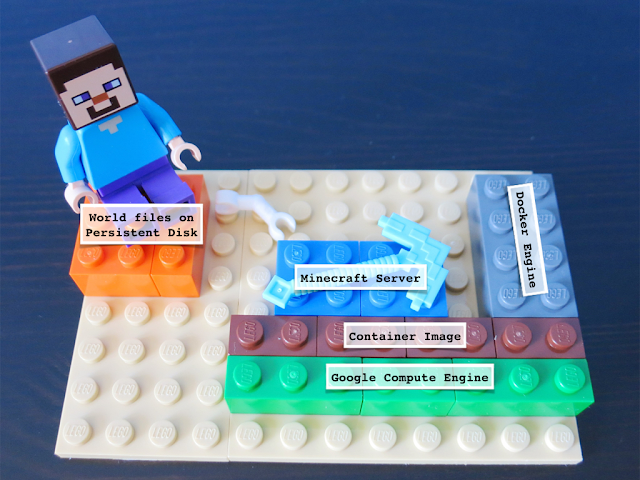 Next, you'll work through the steps needed to separate out storage from the container and learn how to make regular backups of your game. If you’ve ever made a mistake in Minecraft, you know how critical being able to restore world state can be! As Minecraft is always more fun when it’s customized, you'll also learn how to update the container image with modifications you make to the server.properties file.

Finally, you’ll take the skills that you’ve learned and apply them to making something fun and slightly absurd: Minecraft Roulette. This application allows you to randomly connect to one of several different Minecraft worlds using a single IP as your entry point. As you work through this tutorial, you’ll learn the basics of Kubernetes, an open source container orchestrator.

By the end of the series, you’ll have grasped the basics of containers and Kubernetes, and will be set to go out and containerize your own application. Plus, you’ll have had the excuse to play a little Minecraft. Enjoy!

This blog post is not approved by or associated with Mojang or Minecraft.