With over 1 billion active Android users, an increasing number of developers like you are building successful global businesses on Google Play. Since the last Google I/O, we’ve also paid out more than $5 billion to developers.

This week at Google I/O, we announced new ways to help you build a successful business. These solutions work together at scale to help you find more users, understand and engage them, and effectively convert your active users into buyers.

Last year, Google Play became an even better place to try new ideas. Since May 2013, Google Play offers Alpha and Beta Testing so that you can engage users early to get feedback on your new app. Feedback provided by users is private, allowing you to fix issues before publicly launching the app, and without impacting your public ratings and reviews. Over 80,000 apps on Google Play are actively using beta testing. You can also ensure new versions get a positive response by updating through staged rollouts.

As your app business grows, you dedicate more time to release management. Today we announced the Google Play Developer Publishing API to help you scale your release operations. The new API will let you upload APKs, manage your in-app products and localized store listings. You will be able to integrate publishing operations with your release processes and toolchain through a RESTful API. With the Google Play Developer Publishing API you’ll spend less time managing your releases and more time managing your business. This API is currently in closed beta and we look forward to making it available to all developers.

The Google Play Developer Console now offers more actionable insights into your app’s performance by sending you email notifications for Alerts and providing Optimization Tips. We’re also offering new revenue metrics including number of buyers and average revenue per paying user. You’ll also be able to export user reviews for further analysis. Click on Announcements in the Developer Console for a list of new features. 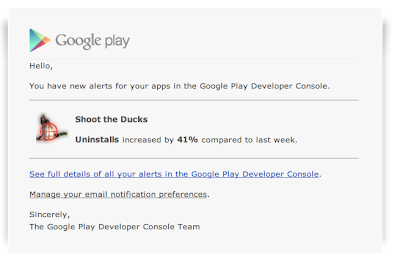 For game developers, we recently launched enhanced Play Games statistics on the Google Play Developer Console. You get a daily dashboard that visualizes player and engagement statistics for signed in users, including daily active users, retention analysis, and achievement and leaderboard performance.

With AdWords, we're building a robust platform to help you promote your app and drive re-engagement. This week we are launching Installed App Category Targeting, a new way to promote your app to new users. It helps you reach potential customers across the AdMob network who have already installed apps from related categories on Google Play and other app stores. For example, an action-oriented game developer may wish to reach users who have previously installed apps from the category Action & Adventure Games.

Ads can also remind users about the apps they already have. Through Google mobile display and search ads deep linking, you can re-engage users who have already installed your Android app by taking them directly to specific pages in the app. Let’s say someone has the Hotel Tonight app installed on their phone. If they search Google for “hotels in San Francisco," they'll see an ad that will open Hotel Tonight app and take them directly to a list of San Francisco hotels.

This deep-linking is also available through search for all apps that implement app indexing. If a user with the Walmart Android app searches for “Chromecast where to buy”, they’ll go directly to the Chromecast page in the Walmart app. The new App Indexing API is now open to all Android developers, globally. Get started now. 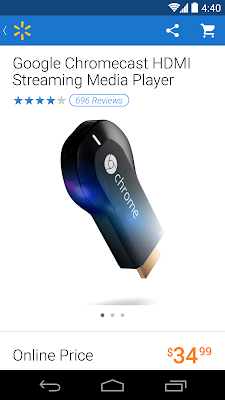 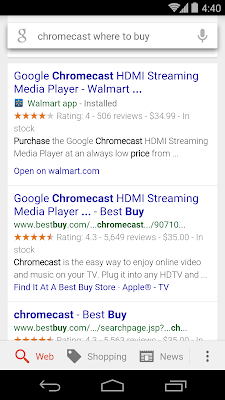 For game developers using Play Games, we announced a new Game Profile that is automatically customized based on the gameplay and achievements earned in those games. Since its launch last year, users have loved saving their game progress in the cloud. We’re now evolving this feature to Saved Games, where users can save up to 3 “bookmarks” of their progress in the Play Games app, complete with images and descriptions. Finally, we announced a new service called Quests — it you run online, time-based goals in your game; for example, players can collect bunch of in-game items on a specific day, and the quests services coordinates with your game to know who completed the goal. These APIs run events for your players, and reward them, without the need to update your game.

Today, we announced that users who have set up Direct Carrier Billing on their smartphone can also make purchases on Google Play from their tablet, charging to the same mobile phone bill. In addition to our recent launch of payments through PayPal, these new user payment options expand monetization opportunities for your apps. 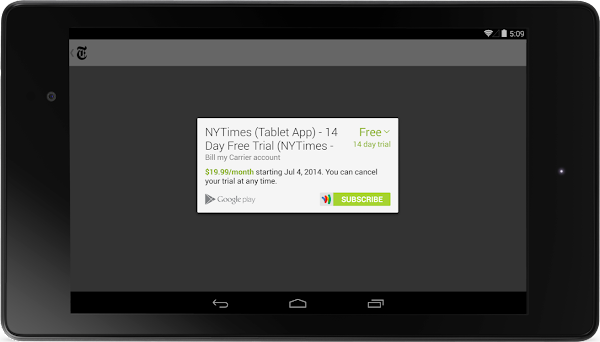 As announced earlier this year, Google Analytics is now directly available in the AdMob interface, giving you powerful segmentation tools to determine the best monetization strategy for each user. For example, you might want to display in-app purchase ads to users most interested in buying, while showing regular ads to those less likely to buy right now. Once you’ve segmented your audience in this way, you can use AdMob to build interstitial ads that promote in-app purchase items to users at a point in your app that’s useful to them. This creates a more customized experience for users, can help prolong engagement and grow in-app purchase revenue. Learn more.

If you're at Google I/O 2014, please join us at our breakout sessions today and tomorrow, where we'll be talking about these features in much more detail. (Add us to your calendar!) And if you can't make I/O, you can always join us on the livestream or watch the videos online later.

Explore the conference with the Google I/O 2014 Android app: